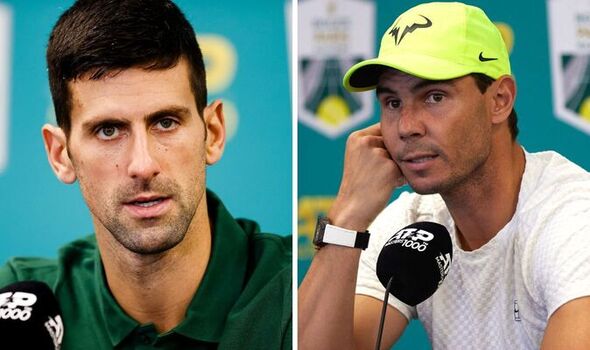 Novak Djokovic has shared his own experience of juggling tennis and being a parent as Rafael Nadal prepares to make his comeback following the birth of his first child. The Spaniard has not competed since the US Open two months ago and is returning at this week’s Paris Masters, his first tournament since becoming a dad.

Nadal is making his comeback in Paris-Bercy after two months away from the game as he continued to recover from an abdominal tear he sustained at Wimbledon. During his time away from competition, the world No 2 also welcomed a son with his wife Mery Perello.

After arriving in Paris for the final Masters 1000 of the season, the 36-year-old admitted it was tough to leave his son behind but was ready to take on the challenge of juggling tennis and fatherhood. And he will find some comfort in long-time rival Djokovic’s experience on tour after he became a father for the first time, as the Serb said it led to some of his best results.

“I had one of my best seasons right after becoming a father in 2014,” the 21-time Grand Slam champion told reporters in Paris. “At the end of the year I became a father and 2015 was one of my best years. It was an immense source of energy and motivation.”

But the world No 7 was quick to give the credit to his wife Jelena, who supported him to continue competing. Djokovic continued: “It has changed me a lot as a person, not so much as a professional. Thanks to my wife, I have been able to continue playing tennis at this level.

“It is important to have someone who supports you in everything, and she has sacrificed a lot so that I can compete.” It appears Nadal has already learned this lesson just three weeks after becoming a father for the first time, as he admitted he had the easy job compared to his wife.

“The life of the ones travelling is less difficult than the life of people staying at home with the baby,” Nadal said after arriving at his first official tournament since the US Open. “And at the same time, it is true that we are lucky today that, with the technology, everything, we can do video calls any time that you want, so that helps. My friends who had babies in the past didn’t have this option.”

The world No 2 will have to quickly learn to get used to being away from his newborn son, as he will play the ATP Finals in Turin following the Paris Masters and is then set to embark on an exhibition tour in South America with world No 4 Casper Ruud. And Nadal was remaining flexible as he navigated this new stage of his life.

The Spaniard explained: “It’s quite interesting how, even after two or three weeks knowing him, even if you can’t interact that much with a three weeks baby, you start missing him. It’s a new life experience. All the changes are difficult in this life, and you need to adapt.

“Every change of this kind, it’s difficult to adapt for me, to be honest. I think it will be more complicated, logically. I have to be more flexible. It’s something unique compared to anything in the past.”