Australian Open qualifier Dalila Jakupovic was forced to retire from her match this morning after falling ill due to air pollution. The Slovenian was a set up when she began struggling to breathe and collapsed to the ground.

Fortunately, the 28-year-old was able to return to her feet and was handed an inhaler before retiring from the match.

Jakupovic fumed that she was “scared” in a scathing assessment of the pollution, which was caused by the bushfires to the east.

“It was really bad,” Jakupovic said. “I never experienced something like this and I was really scared.

“I was scared that I would collapse. That’s why I went on the floor. Because I couldn’t walk any more. I’ve never had asthma before.

“I think it was not fair because it’s not healthy for us. I was surprised. I thought we would not be playing today. We don’t have much choice. 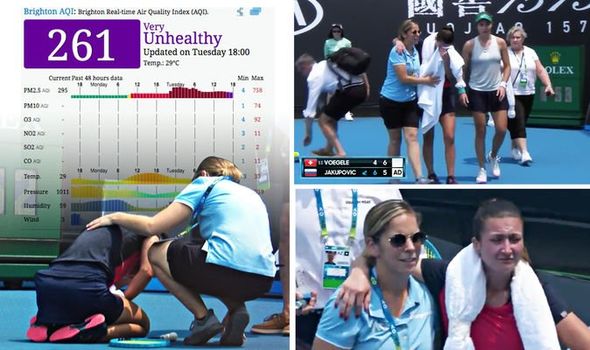 “If we don’t go on the court, maybe we get fined. It would maybe have been better to wait to see if tomorrow is better. They still have time, there is no rush.”

According to the Air Quality Index, the pollution levels reached the worst possible level, ‘hazardous’, for all of Tuesday morning’s play.

Victoria’s Environmental Protection Authority tweeted that it “advises Melburnians should try to stay indoors, keep windows and doors shut, and keep pets inside”.

Qualifying was suspended for a brief period until the pollution level was downgraded to ‘very unhealthy’ on the AQI chart. 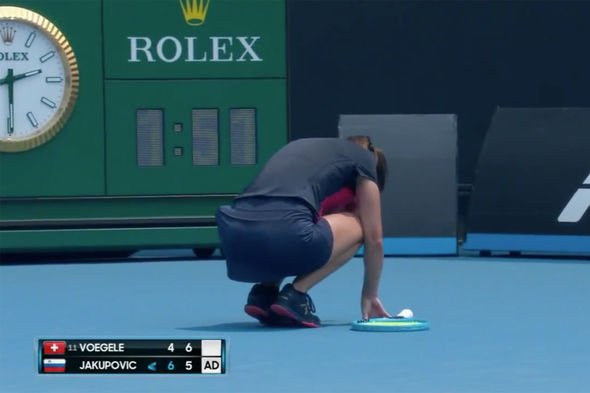 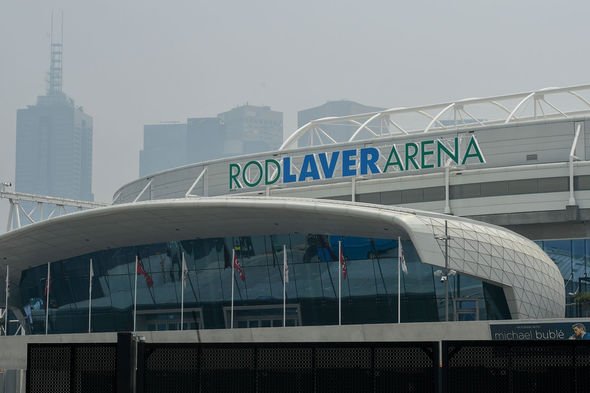 Jakupovic was not the only person to feel the effects of the devastating fires which has swept across Australia.

Supporters were constantly heard coughing and a ball kid also collapsed and required treatment while outside one of the courts. They are thought to have made a full recovery.

Meanwhile, Briton’s Liam Brody lost 6-3, 6-0 against Belarus’ Ilya Ivashka and he spoke of the dire conditions.

“I would like to think I am properly fit at the moment and after four games I was absolutely gassed,” he said.

“At 6-3, 3-0 down, when you are supposed to be relatively fresh, I was bent double and gasping for air. My fitness is one of the best parts of my game but I definitely didn’t feel great. 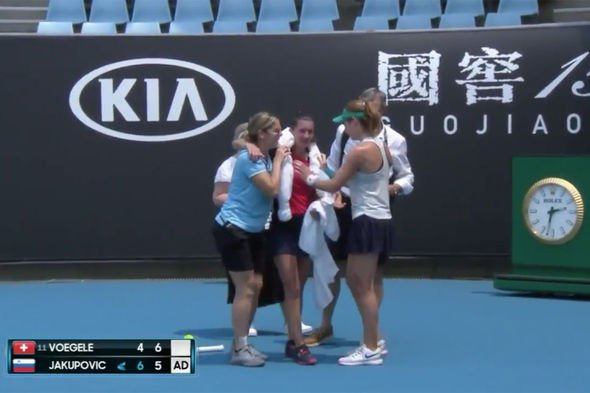 “This morning it was obviously pretty bad. I warmed up and then I was most surprised by how bad it still was when I was walking out to the court.

“I had been inside from 10 o’clock for three hours and, because they had decided to go ahead, I thought it would have cleared up a lot. You can hardly see the (city) buildings over there. It is pretty bad.”

Tennis Australia chief Craig Tiley also explained why practice was suspended on the outside courts.

“This is new for all of us,” said Tiley. “We follow the advice of medical experts and environmental scientists and the health and wellbeing of the players, fans and staff is crucial to the decisions we make.

“This morning when we got up, the smoke haze was significant. Based on that advice we took a decision to suspend practice, and to start the qualifying matches an hour later than it was originally scheduled.”