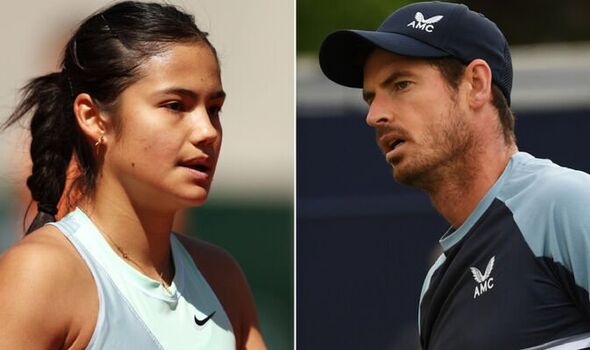 Andy Murray wants to form a champion mixed doubles alliance with Emma Raducanu at Wimbledon – but he admits their singles campaigns will take priority and could put a stop to the idea. Raducanu declared this week she’d “love to play doubles with Andy Murray at Wimbledon” – and the Scot is in full agreement.

Murray’s tunnel vision is focused on reaching the later stages of the singles at Wimbledon, but he admits linking up with Raducanu in the mixed doubles was discussed last year – and he would like it to happen to one day. He revealed: “Last year we talked about it, but we both ended up doing well in the singles.

“I would love to play with Emma at some stage. I’m sure we will both focus on having good runs in the singles, but yeah – I’d love to do that.” Murray meanwhile insists he has “high expectations and lofty goals” on grass this year, and he wants to improve his world ranking enough to make the seeds when he returns to the strawberry fields of SW19 next month.

A double act featuring the two-time Wimbledon champion and US Open queen Raducanu would be the ultimate crowd-pleaser. But as he launched his grass-court season with a taste of the Good Life at the Surbiton Trophy, easing to a 6-2 6-1 win in 57 minutes against Austrian left-hander Jirij Rodionov with seconds to spare before the heavens opened, His Lordship of Dunblane looked in good order.

He will need a good run, either in Stuttgart next week or at Queens Club in mid-June, to rise from No 67 in the rankings and make the seeds at Wimbledon, avoiding a potential hospital pass against Novak Djokovic or Rafael Nadal in the early rounds.

On a blustery afternoon at the Surbiton Rackets and Fitness Club, he played with the urgency of a man in a hurry to regain the top 30. He said: “I have high expectations of myself and lofty goals for the coming weeks, which I discuss with my team regularly.

“I’m not going to share them now, but I’ve trained hard, I feel grass is my best surface and I’ve prepared as best as I can. I can’t control my results or performances at Wimbledon right now, but I can control my attitude on the court, and I can guarantee I’ll give it 100 per cent to have a good run.”

Surbiton is best known, to viewers of a certain age, as the setting for 70s sitcom The Good Life, where Richard Briers and Felicity Kendal quit the rat race and turned a four-bedroomed detached home into a suburban farmstead. Murray was never likely to turn the true surface here into a vegetable patch, nor to leave a goat called Geraldine grazing on the outside courts.

But his game was in decent working order, and the 300 or so spectators – including Chelsea footballer Ruben Loftus-Cheek – appreciated him making short work of world No 127 Rodionov. Muzza, who had earlier posted a photo of himself dressed as a dragon to entertain his kids on social media, also reserved some fire for ATP Tour chiefs who took ranking points away from Wimbledon after the All England Club banned Russian players over the war in Ukraine.

He said: “I don’t know how many matches I’d have to win to be seeded at Wimbledon, but that would be good – and nice. I guess if I had a good run next week, or at Queens, that would give me a chance, but who knows what the seeding will be like? Wimbledon can do whatever they want now the ATP have taken the points away!

“I spoke to some of the Russian players in Madrid and I feel for them. I don’t believe they are in favour of what’s happening in Ukraine, but I appreciate it’s not that easy for them to speak publicly about it.”