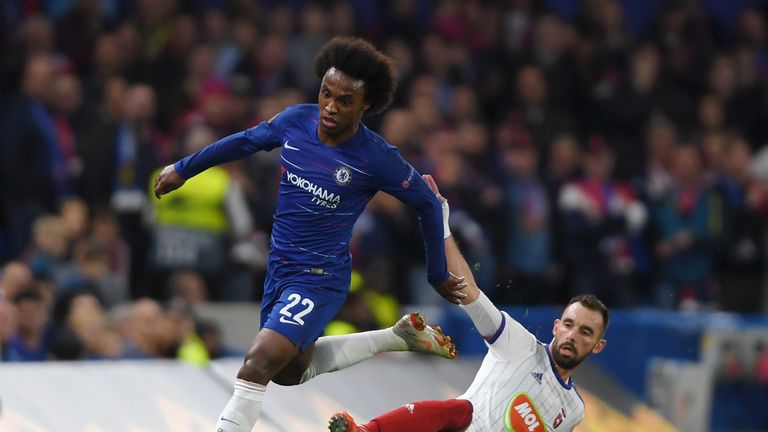 Willian believes Chelsea have no one to fear in the Premier League this season, after an impressive start under head coach Maurizio Sarri.

Chelsea travel to Burnley on Sunday with the Blues third in the Premier League, two points behind Manchester City and Liverpool, and ensured their unbeaten start to the season remained intact after a late equaliser against Manchester United last weekend.

Willian believes Ross Barkley’s injury-time leveller proves Chelsea have what it takes to take the title fight to the wire this season.

Speaking exclusively to Soccer Saturday, the Brazil international said: “We know how important it is to play big games and to score in the last minute (against Manchester United) was amazing.

“We have no one to fear in the Premier League this season, we have a team who will fight until the end and I am sure we are going to do that.”

The 30-year-old believes the change in fortunes at Chelsea – the Blues finished fifth, 30 points behind champions Manchester City last season – is all down to Sarri, who replaced Antonio Conte in the summer.

“The way he works, it is all about playing good football and he has given us more opportunities to show our quality more.”

Willian was the subject of transfer speculation linking him with a move away from Stamford Bridge last summer, with his relationship with Conte appearing to have broken down.

But Willian admits morale is now high in the dressing room since Sarri took charge.

“I am not here to criticise other managers or how they worked because every manager has a different philosophy,” he added.

“Now everyone can see Chelsea is a good team; he [Sarri] is a very positive guy – very intelligent, a very good manager who talks all the time with us.

“Sometimes he has a lot of fun and jokes sometimes which is good to keep the atmosphere high.”