Karim Benzema went through the 200 goals barrier for Real Madrid, Gareth Bale ended a run of eight games without a goal, Vinicius Junior dazzled again, and coach Santiago Solari surely earned himself the job on a permanent basis as his team thrashed Viktoria Plzen.

Nine days ago Real Madrid sacked Julen Lopetegui and after Antonio Conte demanded too much and for too long Belgium coach Roberto Martinez’ name moved to the top of the list.

But first Madrid’s B-team coach Solari was to get his chance – four matches to prove himself. He has now won the first three of them, one in each competition. 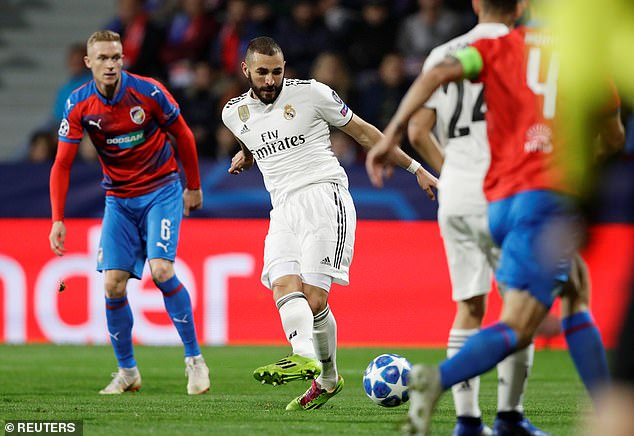 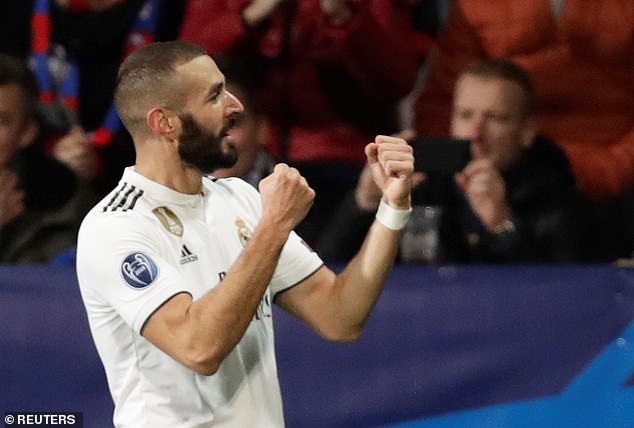 Save an extraordinary turnaround on Sunday away at Celta Vigo he will now be give the job on a permanent basis during the international break. He can thank Benzema for the way this game went.

The Frenchman now has 60 European goals in 113 games and he has 201 in all competitions for Real Madrid. His first was one of the best he has scored in that double century. He was smiling and soon Bale was too.

Far from the jeers of the Bernabeu he delighted in setting up the third and scoring the fourth. And when Vinicius came on for the last half hour he raced away to tee-up Toni Kroos for 5-0.

It had not been all plain sailing against a spirited Viktoria Pilsen. Madrid suffered in the first ten minutes and when Patrik Hrosovski crossed into the six-yard box Nacho’s clearance came back off the Real Madrid crossbar. 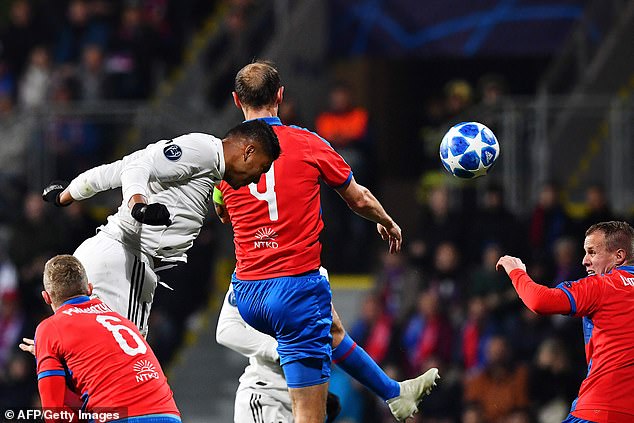 Brazilian midfielder Casemiro doubled their advantage with a powerful header 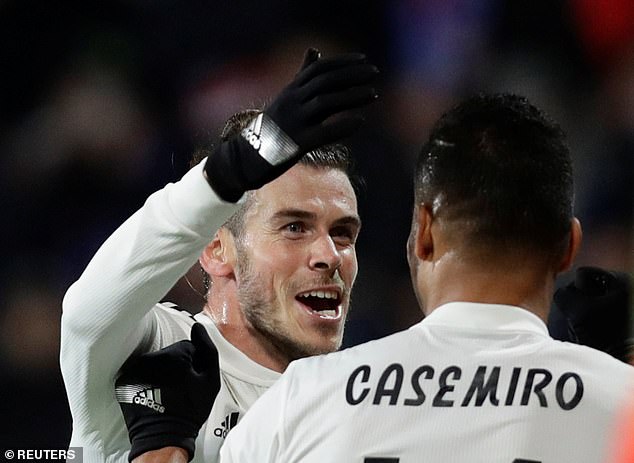 Sergoi Ramos was ruffled and he elbowed Milan Havel leaving him with blood gushing from his nose. The referee had not seen Ramos’ raised elbow and so the Madrid captain was able to come across and put a sympathetic hand on Havel’s shoulder and jog away without punishment. VAR might have seen him sent off.

Bale flashed a header goalwards from a Lucas Vazquez cross but it looked as if Real Madrid did not fancy it in Pilsen’s tight Doosan Arena. Then on 21 minutes Benzema slalomed between Havel and Roman Prochazka in the penalty area and then slipped the ball through Pilsen keeper Ales Hruska’s legs.

Two minutes later Kroos took a corner and Casemiro rose to power his header past Hruska for the second. Madrid’s confidence was now sky high. Thibaut Courtois picked for his Champions League debut ahead of Keylor Navas was sweeper-keeping and Vazquez, in the team ahead of the benched Isco and Marco Asensio, was back-heeling in the Pilsen penalty area. The back heel went straight to a red shirt but it didn’t matter – Madrid had their nonchalance back and they soon had goals number three and four with Bale making the first and scoring the second. 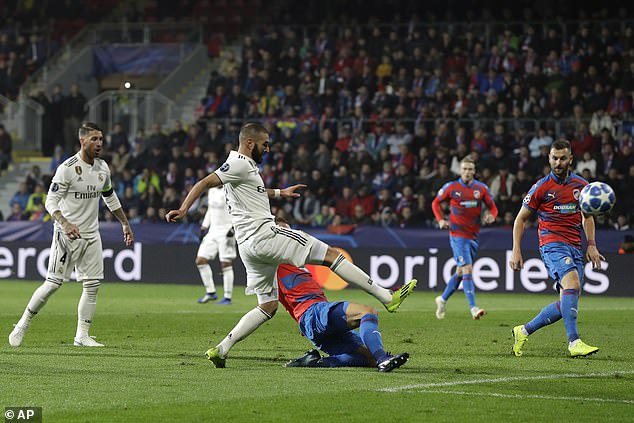 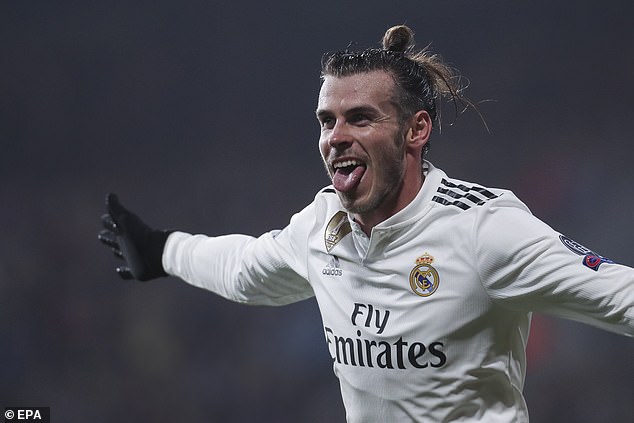 First he climbed to head across the face of the goal for Benzema to nod home and then he found the far corner with a shot from Nacho’s centre. It was his first goal since September when he scored against Roma. It also meant he avoided going nine matches without scoring for the first time in his Real Madrid career.

Pilsen started the second half brightly and Courtois tipped over a Jan Kopic shot. But Madrid saw out the early burst from the home side and as the clock ticked down Solari was able to bring on 21-year-old defender Javi Sanchez for his Champions League debut, replacing Ramos.

Vinicius was next to strip off but it was not to replace Bale. Benzema made way passing the armband to Nacho and enjoying more generous applause than Ramos who had been whistled by home supporters. 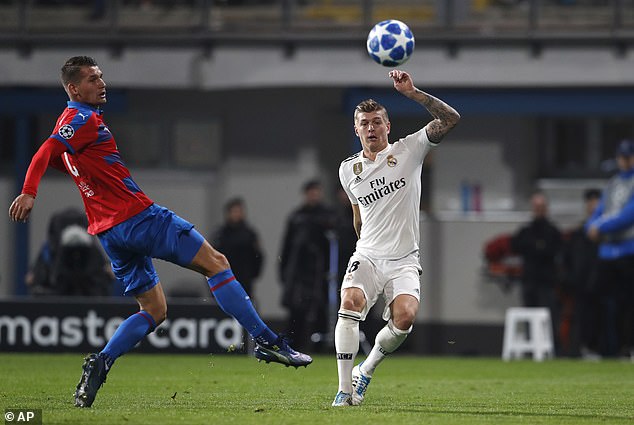 The 18-year-old Brazilian made things happen just as he did at the weekend. He broke quickly and had Bale to his right. Instead he played in Kroos to his left and the German curled a delightful fifth. He was the next to make way with Isco coming on.

Bale and Vinicius broke again and might have worked a sixth but the latter over-hit his pass. He remains very raw, but not so raw that he has not lifted Madrid’s spirit and coincided with their change of fortune. Lopetegui should have used him more.

Bale smashed a shot against the cross bar in injury time but 5-0 will be enough for Solari. He has benefited from throwing caution to the wind and he has Real Madrid back on course, looking a little more like champions of Europe than they did under the previous coach.