UEFA has appointed an ethics and disciplinary inspector to conduct an investigation into Swedish striker Zlatan Ibrahimovic for having an “alleged financial interest in a betting company”, according to European football’s governing body.

Swedish newspaper Aftonbladet reported earlier this month that Ibrahimovic, 39, is a part-owner of betting company Bethard, who he teamed up with in 2018. 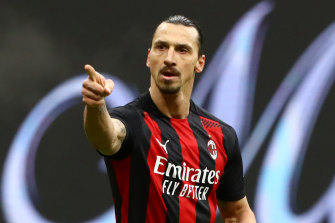 Zlatan Ibrahimovic is being investigated by UEFA.Credit:Getty

FIFA’s Code of Ethics state a player cannot have interests in entities or companies that “promote, broker, arrange or conduct betting, gambling, lotteries or similar events or transactions connected with football matches and competitions”.

Ibrahimovic had quit international football after the 2016 European Championship but returned to Sweden’s national team for their World Cup qualifiers last month. He also played in UEFA’s Europa League for AC Milan this season.

If found guilty, Ibrahimovic would have to pay a fine of 100,000 Swiss francs ($109,373) and would be banned from any football-related activity for a maximum of three years.

Last week, Ibrahimovic signed a one-year contract extension that will keep him at AC Milan beyond his 40th birthday. 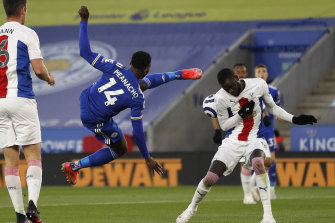 Kelechi Iheanacho tries an acrobatic kick during the game against Crystal Palace.Credit:AFP

Nigerian Iheanacho set up Leicester’s equaliser for Timothy Castagne just after half-time, then smashed home an 80th-minute winner to complete the turnaround at King Power Stadium.

He has now scored 12 goals in nine games in all competitions for Leicester, who are closing in on a place in next season’s Champions League.

Thirteenth-placed Palace were the better side in the first half and took the lead through Wilfried Zaha in the 12th minute.

Leicester responded well though to claim the win that moved them seven points ahead of fifth-placed West Ham United.

If Leicester do go on to secure the top-four finish that eluded them last season, they will have the 24-year-old Iheanacho to thank.

“He is a talented player and when you are a striker the rhythm of games is important and over the last few months he has been absolutely incredible,” Leicester manager Brendan Rodgers said of Iheanacho’s impact.

“The goal he scored tonight was sheer quality.”