Tottenham Hotspur climbed to sixth in the Premier League after goals from Harry Kane and Pierre-Emile Hojbjerg earned a routine home win against a poor Wolves side.

Kane struck the post from outside of the box in the opening five minutes and the visitors spent most of the match on the back foot at the Tottenham Hotspur Stadium.

Conor Coady scrambled a Kane header off the line shortly before half-time, in one of a number of clearances the Wolves captain was forced to make, before the striker latched onto a through ball from Hojbjerg and kept his cool to finish past Rui Patricio.

Kane and Dele Alli hit the post before Hojbjerg doubled Spurs’ lead when he thrashed in the rebound from Gareth Bale’s fierce shot. The result lifts the hosts above West Ham in the Premier League following the Hammers’ 1-1 draw at Brighton on Saturday.

Here are how the players rated.

Japhet Tanganga, 7: A safe and assured display at right back. Spurs were perhaps missing something by not having a more attacking presence on that side, but he did help the defence look a bit more solid here.

Toby Alderweireld, 6: Looked short on pace when trying to deal with Fabio Silva’s runs in behind but overall kept a solid line. Lost Romain Saiss at the back post following a set piece and was fortunate the Wolves man didn’t trouble Loris.

Eric Dier, 6: The England defender seemed to be a bit spooked by Traore’s pace shortly after being beaten by Morgan Gibbs-White but will be glad to have earned the clean sheet.

Sergio Reguilon, 7: Did brilliantly to keep the ball in play in the move that led to Hojbjerg’s goal. Didn’t offer too much else in an attacking sense on the left side of the pitch – but in fairness he did have Traore to think about going the other way.

Pierre-Emile Hojbjerg, 7: More than made up for an ineffective first-half display by splitting the Wolves defence with his ball to Kane for Tottenham’s opening goal and then being in the right place at the right time to score his side’s second. Proved to be the match winner.

Giovani Lo Celso, 6: Played two gorgeous passes to Son early on, but faded from there. Seemed to always be on the fringes of things and was replaced by Harry Winks.

Dele Alli, 8: Showed several moments of quality in only his fifth start of the season; first to beat Dendoncker with a nutmeg, and another to skip past Saiss. Won the ball back well from Moutinho before slipping Kane in with a perfect pass in the second half, and really should have finished the chance off rather than hitting the post.

Gareth Bale, 7: Got increasingly involved from open play as the match wore on. Looked eager to get shots on goal and run with the ball in what was a lively performance.

Heung-min Son, 6: Saw a lot of the ball around the penalty area but was usually crowded out. Tested Patricio with a shot but struggled to find space to run into, where he could have dealt more damage.

Harry Kane, 8: A composed display. Rattled the outside of the post with a dipping effort inside the opening five minutes and, despite being quiet overall, kept his cool when the chance came to evade Coady’s challenge and give Spurs the lead.

Harry Winks, 6: Kept the ball moving for his team but will hope for more involvement over the final two games of the season 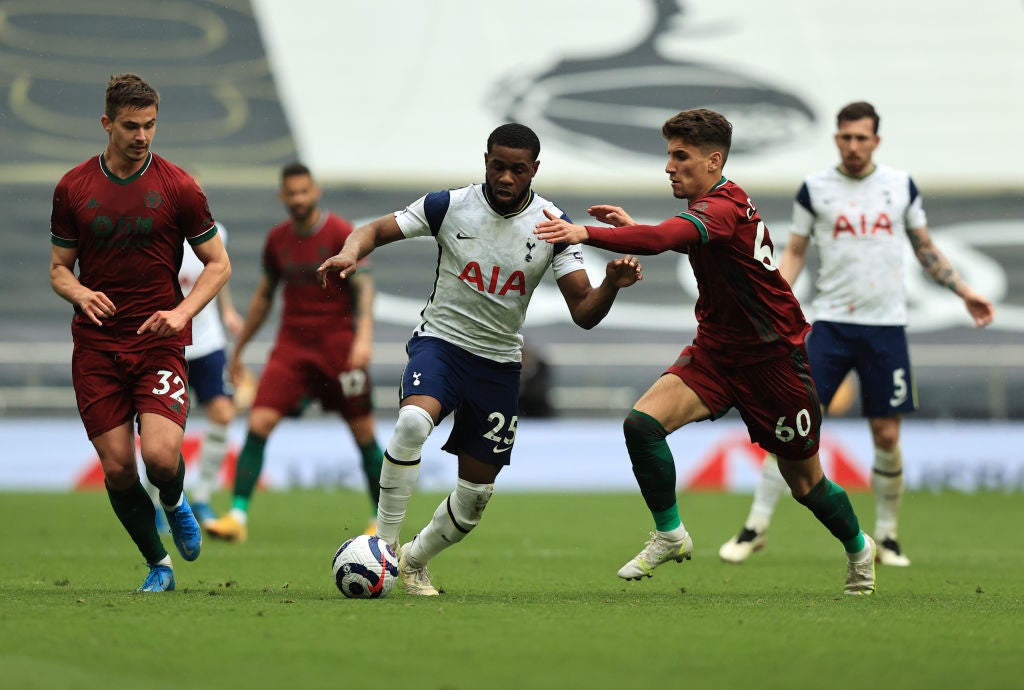 Rui Patricio, 5: Was fortunate to not see the ball rebound into the net after spilling Son’s shot late in the first half and then looked shaky when trying to deal with a Spurs corner shortly before conceding the opening goal. Made a strong save to deny Kane in the second half but was punished by Hojbjerg after spilling Bale’s shot.

Ki-Jana Hoever, 5: The 19-year-old was fairly solid when dealing with Son but made a crucial error when he allowed Reguilon to keep the ball in play in the move that led to Tottenham’s second goal.

Conor Coady, 8: Seemed to be first to everything that was delivered into the Wolves box during the first half, including two clearances off the line, in an awesome display at the heart of the Wolves defence. The England man did lose Kane, however, as the Spurs striker ran though to score the opening goal.

Romain Saiss, 7: Was solid alongside Coady as Wolves spent the majority of the game with their backs to the wall. Had a free header shortly after the restart but failed to test Loris.

Nelson Semedo, 6: The former Barcelona defender was involved in a good battle with Gareth Bale and he more than held his own and did well to show the Spurs winger onto his weaker foot.

Joao Moutinho, 5: Improved as the first half wore on but went missing again as Spurs established control.

Leander Dendoncker, 5: Needed to produce a more combative display in midfield. Spurs ran all over Wolves at times.

Adama Traore, 7: The winger was Wolves’ brightest spark – everything positive went through him. Embarked on a typical bursting run through the middle of the Spurs side early on, and then did it again to set up Silva. Unfortunately for him he received little help from his team-mates.

Vitinha, 4: Struggled to keep possession when dropping into pockets of space and was completely anonymous.

Morgan Gibbs-White, 5: After making back-to-back starts for Wolves for the first time, he found it hard to get involved out on the left but looked more effective when drifting inside. Was involved in Wolves’ best move in setting up Fabio Silva in the second half but the striker shot wide.

Fabio Silva, 4: Looked to get shots away early, and often, but was usually off-target in another frustrating display. He put plenty of work in but was often caught offside and his end product was poor.

Willian Jose, 6: Provided a greater presence for his side in attack but it was too little too late.

Ruben Neves, N/A: Could have done with him on the pitch from the start.

Theo Corbeanu, N/A: Came on too late to make an impact.