A blunder from the officials may have cost Tottenham a clear goal in their clash with PSV – but it will have been their own recurring errors which trouble boss Mauricio Pochettino after a damaging 2-2 draw.

Slip-ups in possession, wasteful finishing and another reckless moment from their goalkeeper hurt Spurs far more than an incorrect offside call against Harry Kane which denied Davinson Sanchez.

Spurs were able to make up for that offside error within five minutes. Compensating for their self-inflicted mistakes will take a monumental effort in their final three group games.

The truth is, Tottenham have only themselves to blame.

When Toby Alderweireld was caught in possession by the energetic Hirving Lozano on the half hour, Spurs were forced to fight back in a match they had controlled. 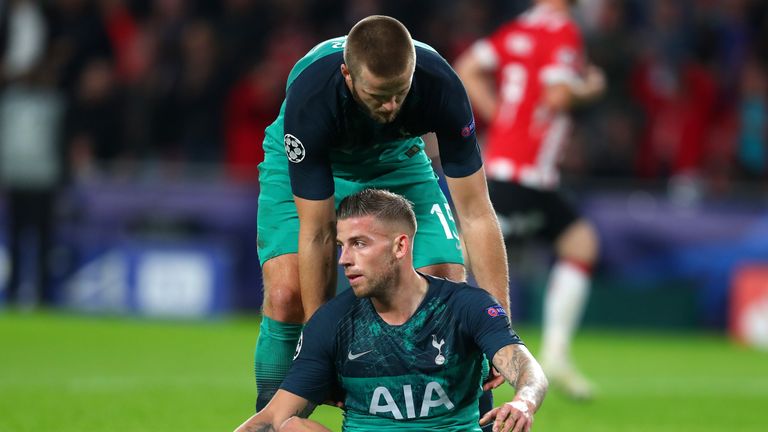 When Hugo Lloris saw red for another rash rush-out-and-lunge, Spurs were forced onto the back foot for the final 10 minutes.

By that point, they should have been out of sight, after failing to convert a host of chances.

Kane and sub Erik Lamela both found the woodwork instead of the net, while Kane and Eriksen had good efforts saved and Heung Min-Son couldn’t break through with any of his three shots on target.

Instead, they eventually succumbed at the other end and the prospect of Europa League football – or no European games at all after this group phase – looms.

Adding to the frustration is the fact that this was a match Tottenham dominated. From their 24 shots at goal to their 70 per cent possession, the visitors bossed a PSV side who had won all nine of their domestic fixtures this season.

Spurs’ two goals were expertly worked, too, with the impressive fit-again Christian Eriksen at the heart of their best play.

The brilliantly-crafted first came from a no-look pass from the Dane, which Kieran Trippier cut back for Lucas Moura to finish. Eriksen then followed up a neat exchange with Heung-Min Son with a pinpoint cross for Kane to head home.

It was delightful stuff and Spurs appeared to be rising to the challenge their boss Pochettino had laid down for them. Win this must-win match, he had said before the game, to prove you have what it takes to win the big titles.

Instead, familiar errors came to the fore once more.

Tottenham have made the most errors leading to goals in the Champions League this season, having twice handed an advantage to Barcelona in their 4-2 defeat at Wembley before Alderweireld’s gift to PSV.

In fact, only Manchester City have made more errors leading to shots, underlining Spurs’ generosity.

Kieran Trippier was guilty of giving up possession against Barcelona in the build-up to the Spanish side’s fourth earlier this month, but captain Lloris has now been culpable twice in two Champions League fixtures for reckless runs out of his box.

Against Barca it allowed Philippe Coutinho to fire into an empty net inside two minutes. Against PSV it resulted in an ugly tackle on Lozano which gave the referee no choice but to brandish a red card – and left his Tottenham team-mates hanging on.

They weren’t able to, with Sanchez’s headed clearance mis-kicked back into the danger zone by Pablo Rosario for Luuk de Jong to flick in just three minutes from time.

It was a painful blow for Pochettino and his players. Their Champions League hopes are slipping out of sight once again.

With Manchester City heading to Wembley on Monday Night Football, they have little time to dwell on their disappointment. Their attentions must shift back to domestic matters. And they will know they can ill-afford more basic mistakes against the Premier League’s defending champions.