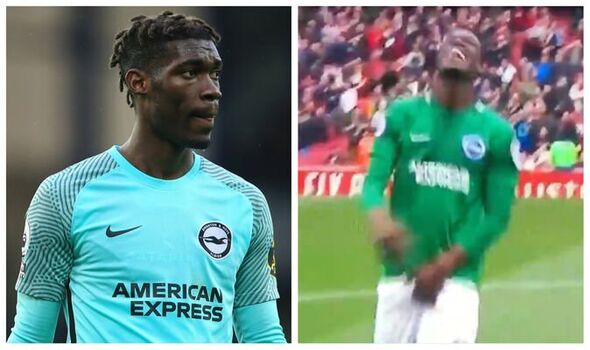 Tottenham transfer target Yves Bissouma has already endeared himself to the club’s fans after a video of him appearing to laugh at rivals Arsenal re-emerged. The Brighton midfielder has been heavily linked with a move to Spurs this summer, with a fee reportedly already agreed.

According to various reports, Spurs have reached a £25million deal with Brighton for Bissouma. The South Coast outfit were keen to receive a fee for a player who could leave for nothing when his contract expires in 2023.

Bissouma has been one of Brighton’s key players over the past few seasons and has caught the attention of Europe’s top clubs with his all-action and dynamic midfield performances. Spurs appear to have won the race to sign the Mali international, although Arsenal were previously linked with a switch.

The 25-year-old has already won the hearts of Spurs fans, though, after a resurfaced video of him laughing while Arsenal players sit sprawled on the Emirates Stadium turf after missing out on Champions League football in 2019 did the rounds on social media. Arsenal had to win against Brighton to maintain their hopes of playing in the elite European competition.

But a late Glenn Murray penalty meant they only drew 1-1 with the Seagulls and missed out on the top four under then-boss Unai Emery. In a clip that later emerged, Arsenal’s players seemed devastated as they sank to the turf, while Bissouma was seen in hysterics.

It is not completely clear if the former Lille player was directly laughing at the Gunners stars, but that did not stop Spurs fans enjoying the moment. Spurs finished fourth that season but have not played in the Champions League since the season after.

History repeated itself last season, though, as Antonio Conte’s side pipped Arsenal to fourth place. The Italian is now building a squad capable of competing in the Champions League and Bissouma is expected to be one of his additions.

Spurs were often light for options in midfield outside of Pierre-Emile Hojbjerg and Rodrigo Bentancur under Conte in the second half of last term. Bissouma would give the 52-year-old a quality alternative.

The north Londoners have already made two new signings during the summer transfer window. Experienced Croatia international Ivan Perisic has arrived after running down his contract at Inter Milan, while veteran England shot-stopper Fraser Forster has signed on a free transfer to add depth to the goalkeeping department.

Conte is widely understood to be keen on acquiring a new centre-back. However, Inter ace Alessandro Bastoni’s agent has already ruled out a transfer for his client following strong links.