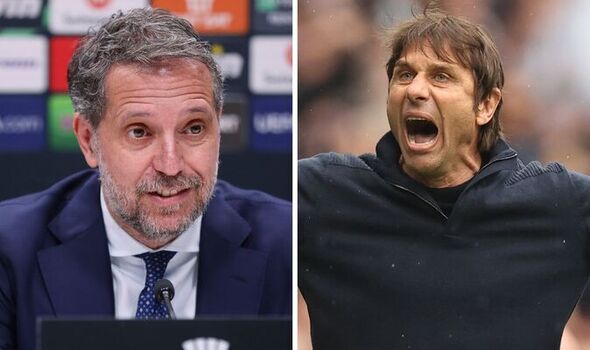 Tottenham boss Antonio Conte still wants a centre-back and another right-back before the summer transfer window is over, and they’re reportedly one step closer to the former. Tottenham have already made use of the free agent market with both Ivan Perisic and Fraser Forster coming in to bolster Conte’s squad.

They’ve both been joined by Bissouma as the newest signing at Tottenham after the club struck a deal with Brighton. But bolstering Conte’s defensive options for next season has always been a top priority for the club this summer.

And they may be set to fill the centre-back slot with Foot Mercato claiming Tottenham are now in ‘pole position’ to sign Evan N’Dicka. Marseille are said to be Tottenham’s closest rivals for the 22-year-old, but the French side have so far stalled in their negotiations with Frankfurt.

Tottenham now appear the favourites to sign the young French defender, who scored four league goals last season. He also played a huge role in helping Frankfurt win the Europa League and has just 12 months remaining on his current contract.

N’Dicka isn’t the only central defender being linked with Tottenham though with Ilya Zabarnyi, Josko Gvardiol and Alessandro Bastoni also of interest. Both Gvardiol and Bastoni will cost Tottenham a huge fee with RB Leipzig and Inter Milan respectively reluctant to sell.

Bastoni’s agent Tullio Tinti has also appeared to rule out a move to north London after stating this week that the 23-year-old will not be leaving Inter. Zabarnyi has emerged as a cheaper alternative and has already achieved plenty at the tender age of 19.

He’s already established as an international for Ukraine, making his debut back in 2020 and played every minute for his country at Euro 2020 last summer. N’Dicka has a tougher job in breaking into France’s national team with the likes of Raphael Varane, William Saliba, Ibrahima Konate and Jules Kounde regulars in Didier Deschamps’ squad.

But N’Dicka fits the profile for Conte seeking a left-sided centre-back and will be available for a relatively cheap price given his contract situation.