Report and highlights from the Sky Bet Championship clash between Sheffield Wednesday and Cardiff City at Hillsborough as Adam Reach scores twice to lift Owls up into 23rd place, six points from safety

Sheffield Wednesday gave their Sky Bet Championship survival fight a huge boost with a stunning 5-0 win against Cardiff, who have seen their play-off hopes fade.

Wednesday were the league’s lowest scorers and had slipped to the bottom of the Championship table before kick-off, following Wycombe’s win against Rotherham earlier in the day. But they responded in sensational fashion and completed their first league double over Cardiff since the 1983-84 season under Howard Wilkinson.

Cardiff saw a few brighter moments after half-time, but were again hit by a Wednesday quickfire double, both on the counter-attack. The first was tapped home by Jordan Rhodes (65), before Reach (69) started and finish the break for his second of the evening. 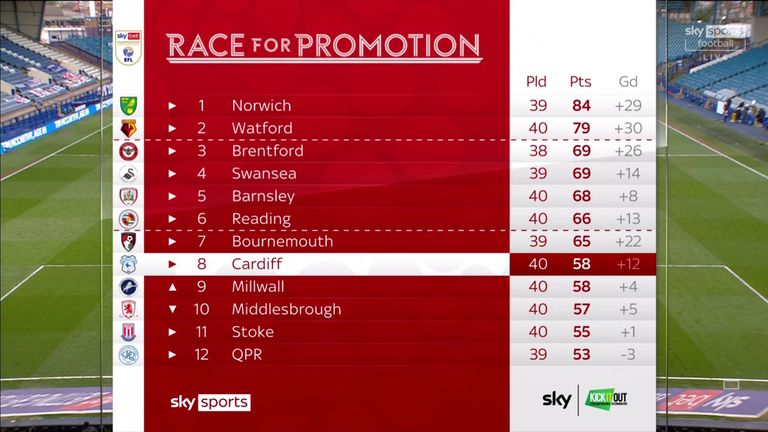 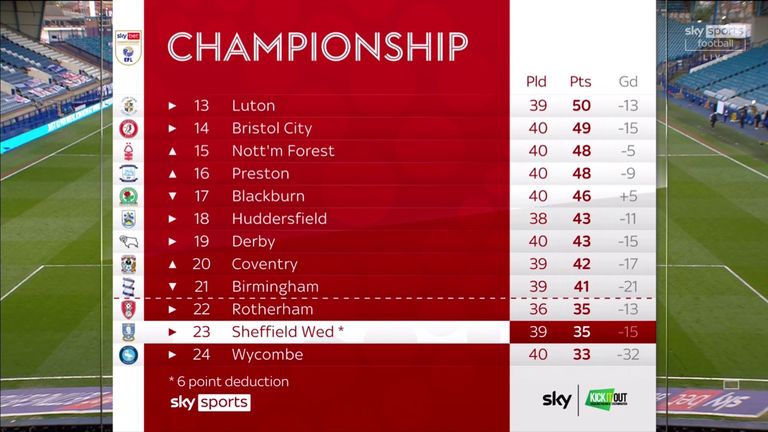 It sends Wednesday back above Wycombe into 23rd place, six points from safety after registering their first clean sheet in 11 games. They also end a run of four successive defeats at Hillsborough.

The result is a huge blow for Cardiff’s play-off chances as they are now eight points from the top six, with Barnsley, Bournemouth and Reading all winning on Monday. They have also lost their first away game under Mick McCarthy, who has suffered his first loss away to Sheffield Wednesday. Sheffield Wednesday made the perfect start as Bannan delivered an outswinging corner and Borner nipped ahead of Aden Flint to glance a header home after five minutes.

Wednesday continued to see the better of the play, and added another in the 20th minute. A sensational, floated pass from Josh Windass picked out Liam Palmer on the right flank. His control was not the best, but he steadied himself to cut the ball back for the waiting Paterson in the middle, with the former Cardiff striker producing a wonderful, first-time volley to fire past Dillon Phillips.

The third swiftly followed. Sheffield Wednesday won a free-kick just inside the ‘D’ and Bannan, the usual taker of such an opportunity, tapped the ball across for Windass, who stopped it dead for Reach. The midfielder then rifled a sweet strike into the top corner, easily beating the dive of Phillips.

Cardiff offered little by way of a reply in the first half, with Wednesday defending well at the back as well as impressing going forward.

At kick-off they were the lowest @SkyBetChamp scorers with 28 goals from 38 games and had not scored more than 2 goals in a game this season pic.twitter.com/GpuuaJl0tT

Both sides had early sights of goal after the break. Joe Ralls whipped in a free-kick, but Flint could only direct his header wide. At the other end, Bannan struck from range, but Curtis Nelson was there to make a vital block.

Wednesday then hit Cardiff on two superb breaks in the space of four minutes. The first came after Wednesday had cleared the ball off the line, before Bannan led the charge down the field. He picked out Paterson on the right, who then squared the ball for the waiting Rhodes, who easily slotted home his fourth goal in five Championship games.

Reach then netted his second of the game, starting and finishing another counter-attack. He beat Tom Sang on the left before bursting down the field. He played the ball in for Windass, drove into the area to receive the pass back, and chipped the fifth past Phillips.

In between the two goals, Cardiff had a golden chance to pull one back, but Flint, Jonny Williams and Nelson all saw attempts blocked at close range. In the 85th minute, substitute Harry Wilson clipped an effort off the post to cap off a terrible Easter Monday for Cardiff.

Man of the match – Barry Bannan

It was a midfield masterclass from Bannan, who could be vital for Sheffield Wednesday’s run-in.

Sky Sports co-commentator Andy Hinchcliffe said: “Every Wednesday player has been a nine out of 10, Paterson and Tom Lees deserve a special mention, but Bannan is the star of the show.

“He has been absolutely everywhere, one of the best individual performances I have seen in the Championship this season. Pure class.”

Sheffield Wednesday’s assistant manager Jamie Smith: “It’s a massive performance and a massive win for us. We said to the players that we needed three points today, it wasn’t a must-win, but we needed the three points. The lads put all the work in, the effort and got their just rewards.

“With technology nowadays, he [Darren Moore] was in contact with the staff and the players right through really. He was on the phone to the analysts at half-time as well, in the dressing room with the lads so he’s in constant contact.

“There’s a lot of quality in the dressing room. They’ve shown it since we’ve been here and on the pitch today, you saw it yourselves.

“There were some great goals, some great finishes. But again, we’ve seen that in training, so it’s not a surprise to us.

“[Against QPR] it’s the same again. Back to the training ground, work hard, belief, positivity and we go again. It’s very achievable [to avoid relegation]. We’re always positive, we’ll reflect on the game and get ready for the next one.”

Cardiff’s Mick McCarthy: “From the first goal, which is not like us to concede from a corner, we seem to have got dragged about and played out of position. We’ve not really done our jobs as well as we have done in the past and it’s cost us.

“The third goal, it’s a great free-kick and the ‘keeper has no chance. The free-kick we give away is the disappointing part.

“I felt like we had a good start to the second half, we had it blocked on the line, and we were punished because we were pressing to get a goal back. we’ve been done on the break twice, which is disappointing. In normal circumstances, I don’t think that happens, but nevertheless, it was still great quality by Sheffield Wednesday.

“They punished us harshly and it was a humbling lesson for us.

“It doesn’t feel like it [being able to make the play-offs] when you’ve had a slapping like we have tonight. We’ll just keep going and keep trying to pick up points. There’s nothing I can do about this, we have to repair the damage emotionally as much as anything and then get ready for Saturday.”

What the pundits said… 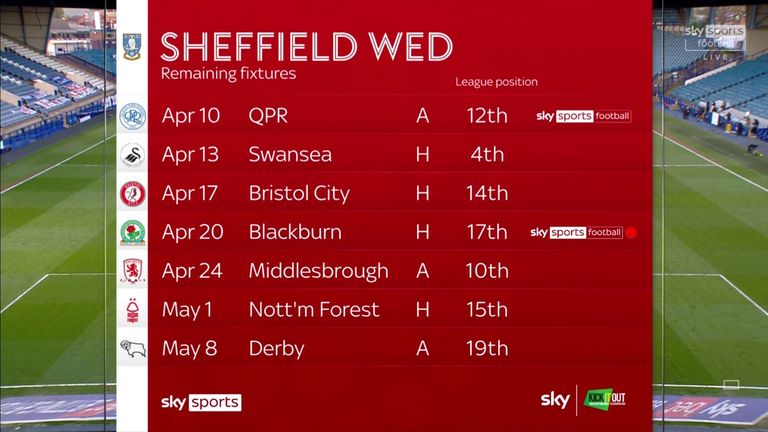 “It was ruthless, and that’s what they haven’t been. They’ve been creating loads of chances but haven’t been clinical enough. Today, they were and some of the goals were breath-taking. There were two or three goals of the season for Sheffield Wednesday today, it was brilliant football.”

Former Sheffield Wednesday manager Garry Monk: “They were fantastic today, exactly what they needed. We talked about it a lot, even in my time there at the start of the season – it’s not creating the chances, it’s the ruthlessness with it and today was complete clinical and ruthless finishing. 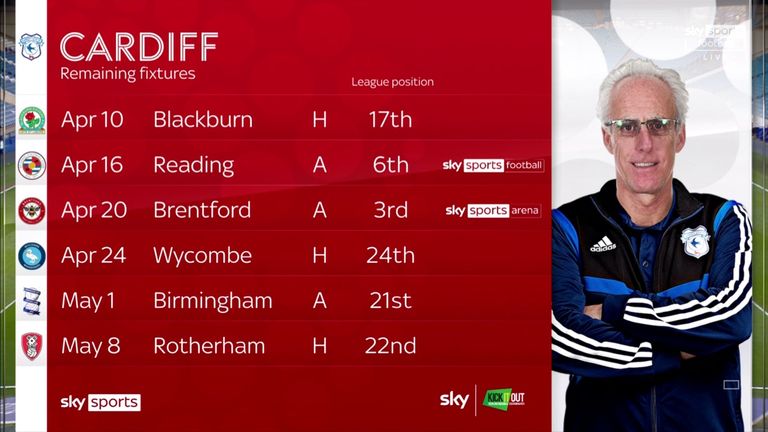 “it was a perfect performance from start to finish… They bamboozled Cardiff with the start they had, they got the goals and never looked back. Cardiff didn’t know how to react to it and it was such a good performance.

“I’ve said all along, this is a squad that should be way above where they are right now. Today was just a clear example of what they’re capable of and I hope the players take it on board.

“The key to it now is to take those shoots of growth that they’ve had today and replicate it, which they haven’t been able to do all season long. But now, if you’re going to do it, what a perfect time to start it.”

Sheffield Wednesday are back on Sky Sports at the weekend, travelling to QPR on Saturday; kick-off 3pm. Cardiff play on the same day, hosting Blackburn; kick-off 3pm.