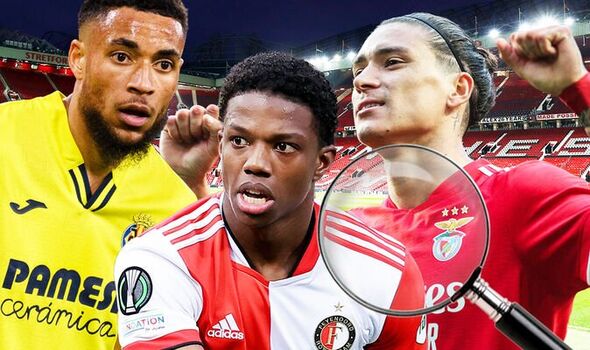 Manchester United’s scouting department have endured yet another restless campaign collecting detailed analysis and data on the road, while casting a watchful eye over a whole host of reported targets around the world – including the Premier League. The Red Devils have already confirmed that chief scouts Jim Lawlor and Marcel Bout will be moving onto pastures new at the end of the season but for the meantime, work to improve United’s recruitment drive remains ongoing with both feet firmly on the pedal.

New boss Erik ten Hag, who is set to arrive at Old Trafford in the coming months after agreeing an initial three-year contract (with the option of an additional 12 months), will ultimately have the final say over any summer arrivals but that hasn’t stopped United from drawing up detailed scouting reports on several possible targets.

Interim boss Ralf Rangnick is set to move upstairs into his consultancy role as scheduled – despite accepting the Austria national team hot-seat – and the 63-year-old has already confirmed that up to 10 new faces could arrive at United in the off-season, meaning there will be vast focus on bringing in the correct profiles ahead of the 2022/23 campaign.

It’s no secret that United’s network of scouts have been handed a series of personal assignments in recent weeks but some players have been facing further, extensive examination than others.

One of those is highly-rated Benfica frontman Darwin Nunez and Express Sport understands he’s been watched upwards of 15 times this season by United with Arsenal, Tottenham, Newcastle, West Ham and Atletico Madrid also interested in the 22-year-old goal machine.

United scouts – among others – were in Lisbon at the Estadio da Luz to watch Nunez score twice in a historic 3-0 triumph over Barcelona in the Champions League group stages back in September.

From that day on, it was clear that the Uruguayan international centre-forward would be placed under the microscope in further detail, as his United and Premier League credentials were continually assessed in preparation for his compatriot Edinson Cavani’s departure.

So far, he is yet to let United down, having also scored in front of their scouts in the 3-1 quarter-final defeat to Liverpool last month. Nunez now has 26 goals in 27 Primeira Liga outings this season and is also believed to be wanted by Ten Hag, after netting a decisive-headed winner for Benfica to dump Ajax out of the Champions League in Amsterdam in mid-March.

Yet he’s not the only forward to have been assessed by United scouts in this season’s competition. Villarreal’s Arnaut Danjuma – a £16m summer signing from Championship side Bournemouth – was also monitored in his side’s 1-0 quarter-final triumph over Bayern Munich at Estadio de la Ceramica in early April – a game in which he notched the winner.

His age (25), maturity and attacking versatility fits the exact kind of profile United are looking for as they look to shake up their underwhelming forward options, although Villarreal are likely to demand a steep premium on the back of such an impressive season.

Lyon striker Moussa Dembele, who won La Liga last season while on loan at Atletico Madrid, was also placed under the spotlight in the Ligue 1 club’s Europa League last-16 first-leg win over Porto in March.

The former Celtic and Fulham frontman has just one year remaining on his contract in France and can leave the club this summer, should a suitable offer arrive. His goalscoring pedigree and experience on the continental stage means he is one of several names United are considering as part of their plan to replace departing veteran Cavani.

Wolves midfielder Ruben Neves has been continuously linked with Manchester United in recent seasons, having previously been floated by super-agent Jorge Mendes. With the board looking to add at least two central midfield players to Ten Hag’s squad, he is one of the names currently under consideration with £120m-rated Declan Rice seemingly out of reach.

The Red Devils are understood to have sent scouts to cast an eye over Neves in Wolves’ shock 3-0 home Premier League defeat to Brighton at Molineux last weekend but they have also watched him on several other occasions this season.

Once again, he is not the only central midfielder in the frame though and River Plate’s Enzo Fernandez is another name that has been internally discussed by United’s recruitment team after emerging as one of the brightest talents in Argentina.

Last month, United delegates were in South America to watch him feature in River’s 2-0 Copa Libertadores triumph over Fortaleza. Real Madrid and Manchester City are also tracking the 21-year-old’s progress.

This week, developments in Scandinavia seemingly confirmed that young Hammarby talent Williot Swedberg has also caught the eye of United scouts, who recently watched him in the 0-0 draw with Malmo.

The 18-year-old attacking midfielder, who already has five Allsvenskan goals in six outings this season, was on course to join Lokomotiv Moscow for just under £5m before Russia declared war on Ukraine. Now he is believed to be one of many talents considered for the future.

While there is no better judge of character than new boss Ten Hag when it comes to players from the Eredivisie, United have spent the second half of the season scouting Feyenoord left-back Tyrell Malacia.

The Rotterdam-born 22-year-old Dutch international is rated in the region of £20m and although so far there has been no discussions between the two clubs, Malacia is understood to be one of Ten Hag’s preferred targets, as United scouts continue to draw up dossiers on the defender.