Sergio Ramos embraces the heat of the Clasico battle more than any other… but can Real Madrid star stay on the pitch in the age of VAR?

It wouldn’t make a very good pub quiz question because it’s too easy – who has the most Clasico red cards? It’s Sergio Ramos, of course.

As the countdown continues to the first Clasico with a Video Assistant Referee (VAR), the man who never seemed to get away with anything even before the referees had technology helping them, is pumped up and ready to rumble.

Ramos has played 40 times against Barcelona. His vital statistics are 13, 8, 19 and 5 – that’s wins, draws, defeats and red cards. 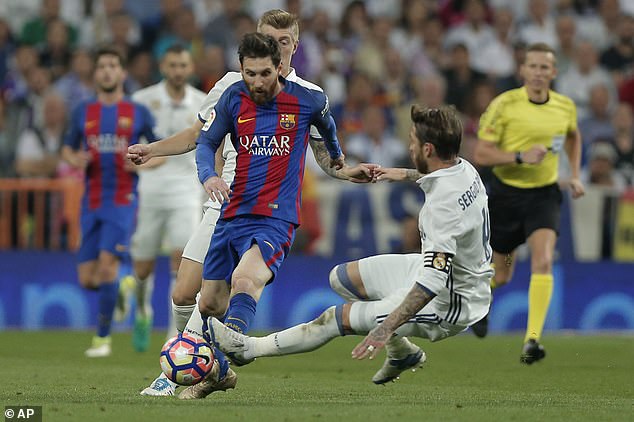 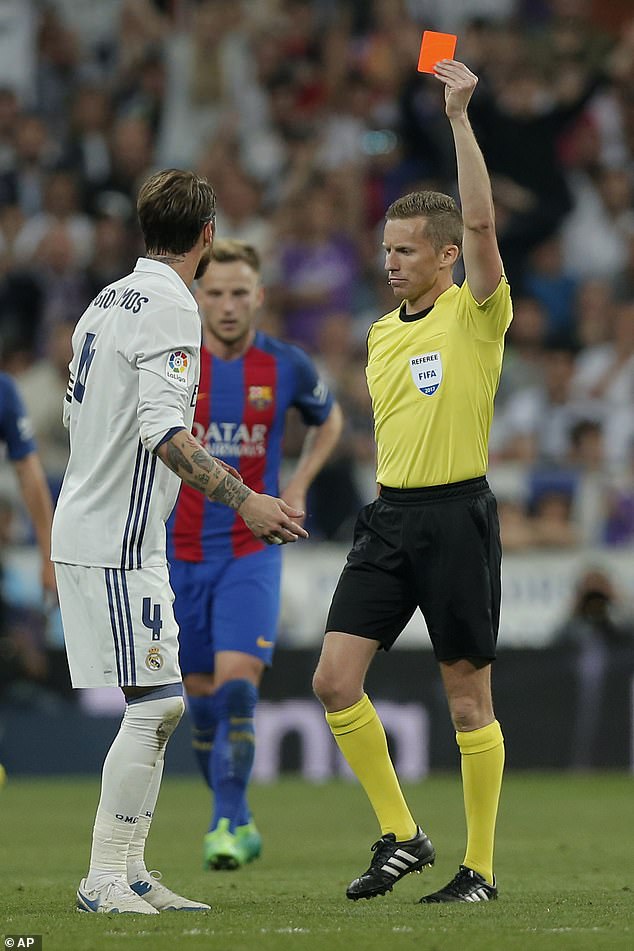 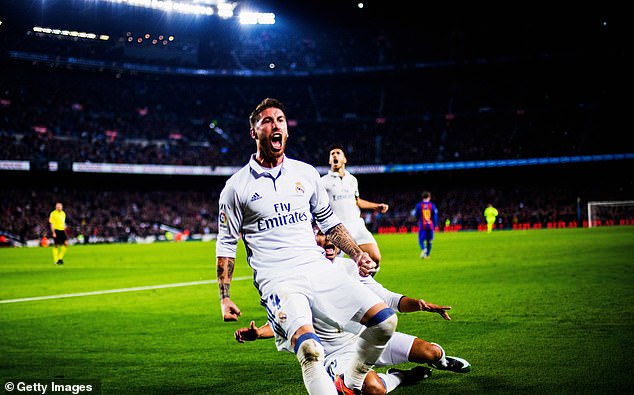 Nobody embraced Jose Mourinho’s battle cry to bully Barca more than Ramos and no one has carried on the tradition since. Sunday will be no different.

The Captain will start the game with all the same passion that he has started the previous 38, and Madrid supporters will hope, that for the good of the team, he is still on the pitch at the end.

It was the game that Wayne Rooney admitted made him rise from the sofa and applaud the Barca team, the match that Xavi would later tell Sportsmail, even had the Barcelona players giving themselves an ovation in the dressing room afterwards, and it was all too much for Ramos’ pride.

He took one too many kicks at Lionel Messi and was sent off by Eduardo Iturralde in injury time. 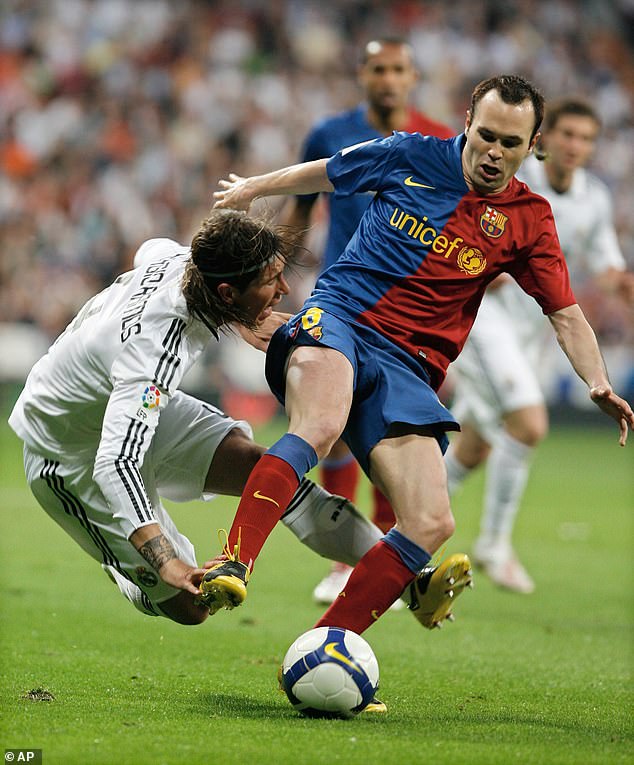 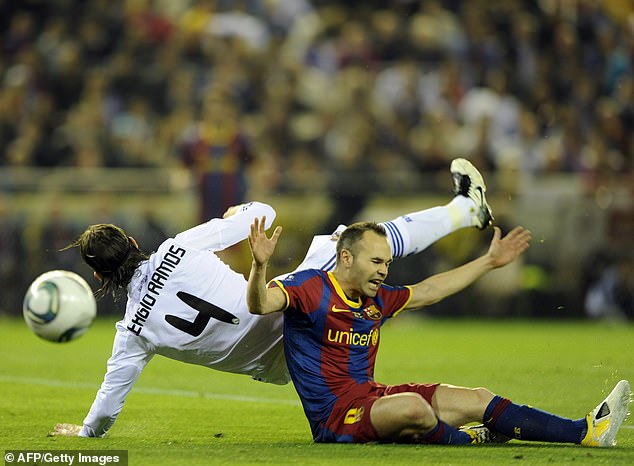 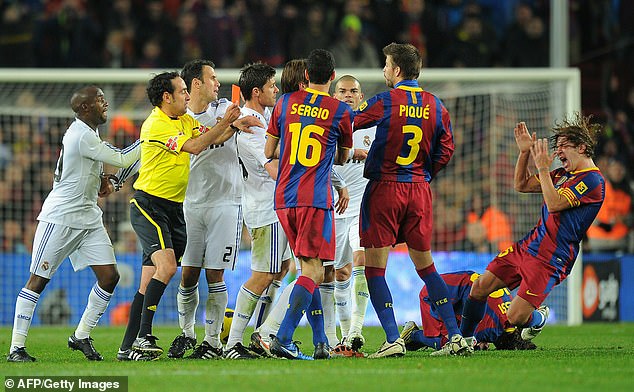 Ramos in the Clasico

Madrid had been taken apart and Ramos was determined that if he couldn’t leave his mark on what was a monumentally one-sided match he would at least leave a mark on Messi.

As he left the field, he also put a hand in the face of Carles Puyol sending him flying backwards and gave Xavi a piece of his mind. It was the Clasico that tore the Spain team apart, Ramos was at the heart of it.

His last came with another one of those Olympic lunges at Messi earning him a straight dismissal.

‘Later you can moan about the referees,’ he said to Gerard Pique as he walked off the pitch.

His comment made reference to comments Pique had made before the match suggesting referees were unfair on Barcelona and that Spain (the entire country, not just the league) was run from the Madrid directors box – reference to it frequently being full of politicians. 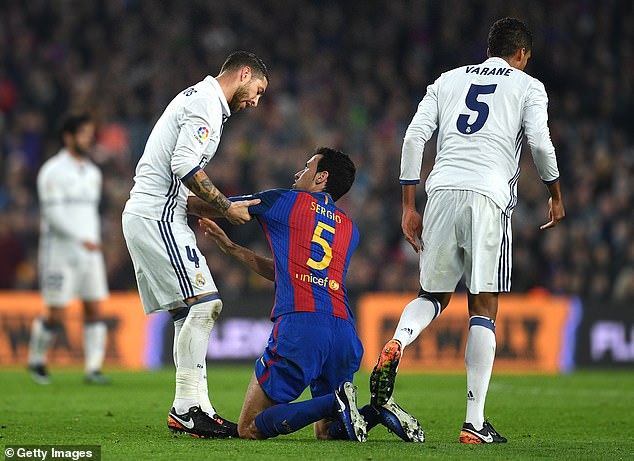 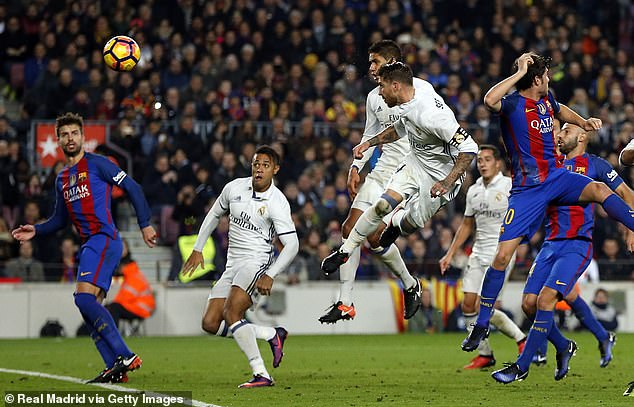 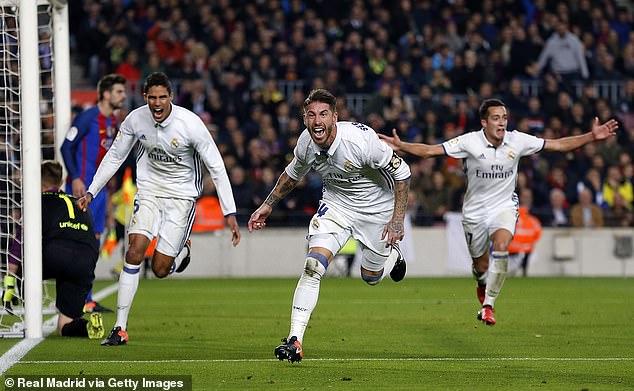 Naturally, Ramos didn’t hold back in his celebrations after scoring against the old enemy

‘He had both feet in the air and he got nowhere near the ball, he will regret it when he sees it later at home,’ was Pique’s response to Ramos agricultural challenge and subsequent early shower.

Going head to head with Pique is part of the reason Ramos gets so up for these matches. Beating Barca also means him getting one over on his former Spain team-mate.

The pair did their best to get along when they were wining trophies together at international level, now that Pique has retired there is no need for that pretence anymore.

Two of the greatest defenders in the history of La Liga they are very different personalities and they have quite different disciplinary records too.

Ramos is also the record holder for La Liga reds (19), Real Madrid reds in all competitions (24) and most yellows in the Champions League (38) so it’s probably no surprise that he tops the Clasico card count.

What does shock is that he has never been sent off for Spain. 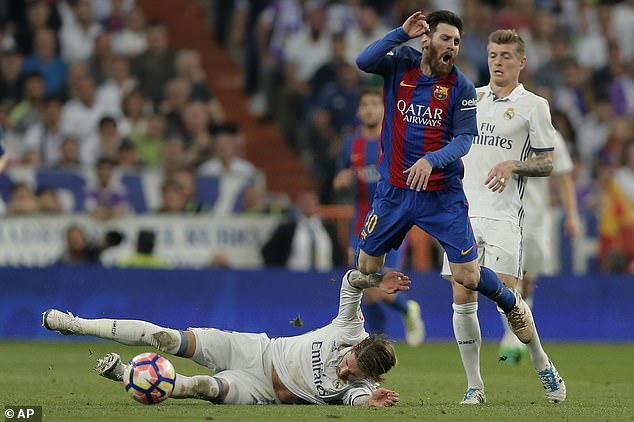 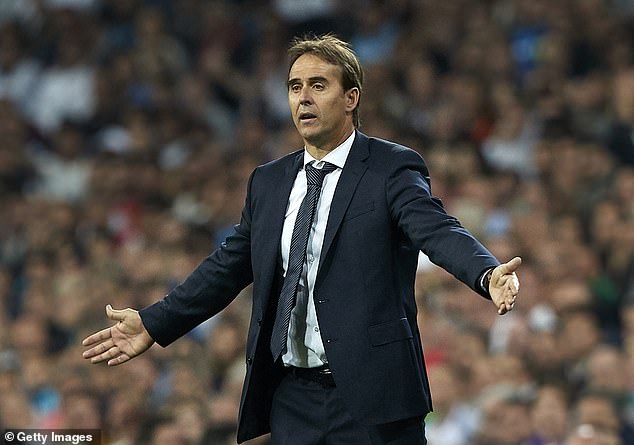 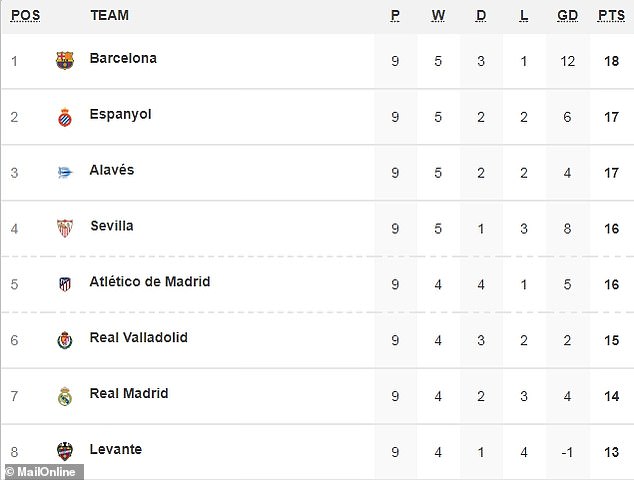 Real Madrid sit seventh in the La Liga table ahead of Sunday’s game, with Barcelona top

The defender gets fired up for his country but there is nothing like a domestic dust-up to get him riled and nothing quite like facing Barcelona to bring out the worse… and, it should be said the best, in him.

There have been some very good performances and some vital goals too. In 2016 he headed in Luka Modric’s free-kick with just a minute on the clock to equalize Luis Suarez’ goal and earn Madrid a point.

Those two men could be the central figures on Sunday. With no Messi to hunt down Ramos will be able to dedicate 90 minutes to stopping Suarez. There was no Messi in 2015 either and ‘only’ having to stop Suarez did not go well for him.

Real Madrid won 4-0 at the Bernabeu with Ramos picking up a booking, risking a red by clashing repeatedly with Suarez, and being unable to stop him scoring twice.

That defeat cost Rafa Benitez his job much as a similar scoreline will be the end of Julen Lopetegui.

That manager’s future is in the hands of his players and no player more than Captain marvel Ramos who was the man who suggested the club hire Lopetegui.

Having his future in Ramos hands will fill Lopetegui with trepidation. He can be sure the skipper will give everything, but will that ‘everything’ be too much for referee Jose Maria Sanchez Martinez and the eagle eyes of VAR?