Rangers 1-1 Kilmarnock: Greg Stewart cancels out Alfredo Morelos’ opener as Steven Gerrard’s side fail to bounce back from cup disappointment

For Rangers, these last few days have turned into a pretty horrible repetition of recent history. Just as it was last season, a bruising defeat in the Betfred Cup semi-finals has been immediately followed by an inability to vanquish Kilmarnock on home turf.

Even the 1-1 scoreline was identical. As is the Ibrox outfit’s consequent total of 18 points after 10 Premiership games. The booing at full-time confirmed these are not happy memories.

The difference, of course, lies in the fact that last October’s instalment of gloom witnessed the long-awaited end of Pedro Caixinha’s hapless reign. Steven Gerrard’s tenure is still in its infancy. But sustaining the optimism about this season that grew through his first five months in charge – and a highly creditable Europa League run – is going to require a far greater domestic durability. 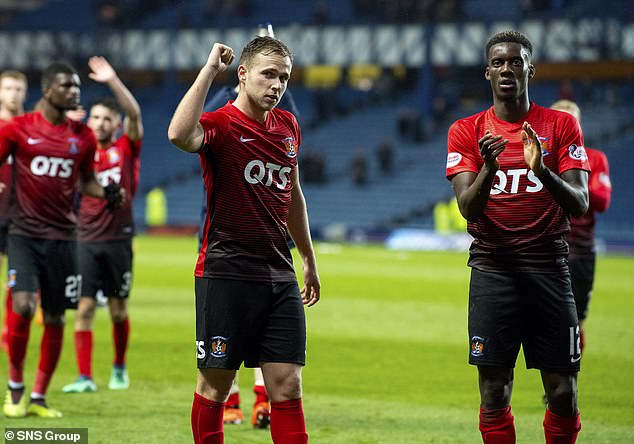 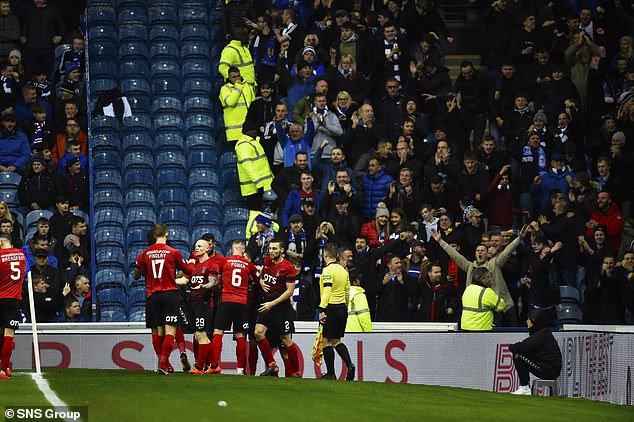 On the evening the club posted a thumping £14.3 million off-field loss for the 12 months to June 30, they were unable to register any gains on it. Hope of wiping away their weekend woes went unanswered.

Sunday’s grim defeat to Aberdeen at Hampden had witnessed just one Rangers shot on target, leaving Gerrard to bemoan a lack of quality in the final third.

The former England captain had been blunt about the need for a strong reaction. And, to be fair, there was actually more threat fashioned here. More chances created. Just not enough to see off a Kilmarnock team whose doggedness is all but unsurpassed.

That was again shown when Greg Stewart rapidly cancelled out an Alfredo Morelos opener in the first half. For all the further opportunities – at both ends – the scoring ended there.

Changes to the line-up that flopped at Hampden were inevitable for the Ibrox boss. In the end, four were made. 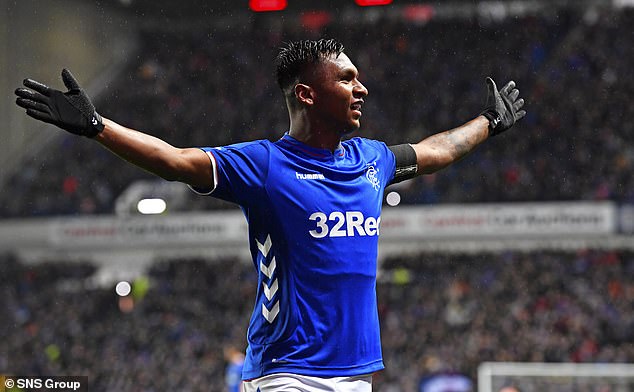 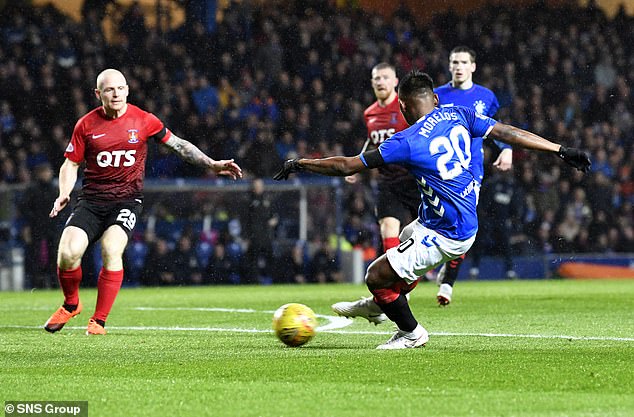 Allan McGregor, Ryan Jack, Umar Sadiq and Ovie Ejaria – who had been struggling with an ankle knock – all dropped out. Wes Foderingham, Andy Halliday, Scott Arfield and Morelos were the names introduced.

Rangers entered the fray with ears burning from their manager’s words. Bluntly, it was time to stand up and be counted as they sought to expunge the disappointment of the first truly significant set-back of Gerrard’s reign.

Kilmarnock were hardly an opponent one would hand-pick for such a mission. The Ayrshire outfit are always deployed with a tactical discipline that reflects Clarke’s expertise.

And so it proved here during an even first half. After trading goals in the opening quarter of hour, Kilmarnock pretty much gave as good as they got.

Ibrox hoped – in vain – that their resilience would be broken by the early Morelos strike.

Nine minutes were on the clock when James Tavernier won the ball in his own half before feeding Daniel Candeias. The Portuguese winger was impeded but referee Nick Walsh played a good advantage, enabling Ryan Kent to take over.

He fed Morelos and the Colombian’s angled strike deflected off Kirk Broadfoot to nestle in the far corner of the net for his 13th goal of a productive season. 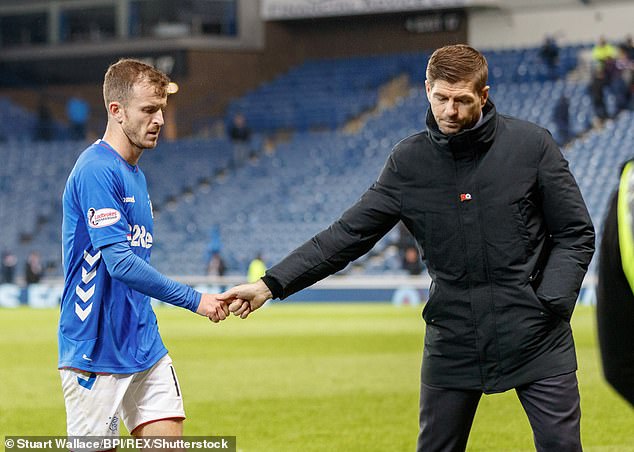 The ripple of joy that spread around the stadium didn’t last for long. Six minutes, to be exact.

Stewart was only able to play after his club decided to contest a disciplinary charge over an alleged head-butt on Hamilton’s Scott Martin last weekend. The wisdom of that call was quickly made apparent as the Birmingham loanee levelled in exquisite style.

His chance arose after Joe Worrall failed to get his head on a long pass played into Rangers territory. The ball broke to the right flank, where Stewart got a break as he tried to dodge past the first, flimsy challenge. No luck was needed for the finish. Shifting to balance perfectly, he curled home a majestic effort from just inside the angle of the penalty area.

Agitation began to rise among the home support. It was a feeling that became more voluble as Gerrard’s side were thwarted in their attempts to regain supremacy.

Connor Goldson saw a header from a Tavernier corner blocked before Morelos’ bid to squeeze in the rebound was smothered by defensive numbers. The Ibrox captain would then clip the bar with a terrific right-foot drive from distance. A couple of inches lower and it would have been the perfect way to celebrate his 27th birthday.

Tavernier’s ambition was, however, matched by his counterpart at right-back. Scotland cap Stephen O’Donnell wasn’t far away with his own blockbuster from 30 yards. With Kilmarnock exploiting space on the flanks, they continued to carry a sense of menace. 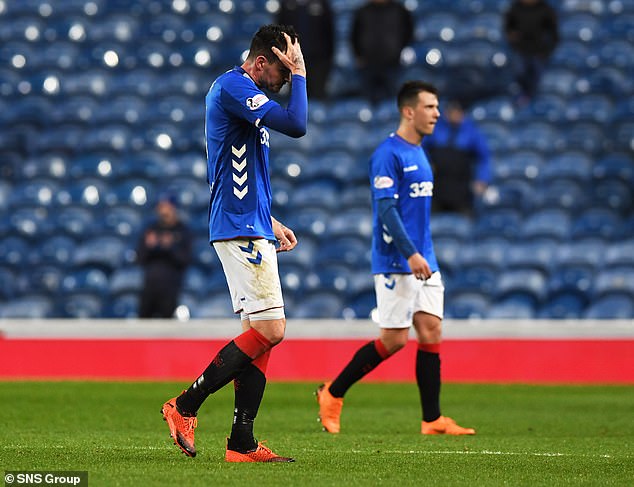 At times, that was aided by Jon Flanagan’s performance at left-back for Rangers. The ex-Liverpool man had toiled throughout the first half and it was no shock to see him replaced at the interval. Jack was introduced in his place, with Halliday shifting from midfield to defence.

It was a measure of Gerrard’s impatience that another change followed within ten minutes of the restart. This time, Lassana Coulibaly made way to bring the pace of Glenn Middleton into action and prompt a change of shape to 4-2-3-1.

Now there was a greater tempo about the Ibrox side. Scott Arfield sent a shot spinning across the face of goal before Goldson had a header pushed over the top by Jamie MacDonald. The Kilmarnock goalkeeper further excelled when stretching out his left hand to touch a bobbling, curling effort from Ryan Kent around the post.

Rangers continued to press but the visitors remained resistant. Morelos hollered for a penalty after a tangle with Broadfoot, but referee Walsh remained unmoved. The striker was booked for dissent, as was Jack a few seconds later.

Five minutes of stoppage time signalled the final cavalry charge from the home side, yet it was their opponents who had the best opportunity.

Stewart skipped through the inside right channel and into the area, nimbly evading challenges as he went. His little toe-poked shot was blocked away by Foderingham to prevent even deeper angst in Govan.