Ulises Davila’s personal cheer squad was out in force again as a depleted Wellington Phoenix held a fast-finishing Western Sydney Wanderers to an enthralling 2-2 draw on Sunday.

Davila’s assist for Mirza Muratovic gave the Phoenix the lead after just nine minutes, but they did well to come away from Wollongong’s WIN Stadium with a share of the spoils after weathering a blistering second-half storm from the Wanderers. 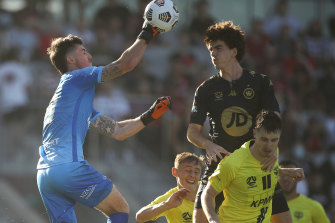 Two goals in the space of six minutes from Kwame Yeboah and Bruce Kamau enabled the Wanderers to hit the lead – but Louis Fenton was able to return fire for Wellington from a set-piece moments later to square the ledger.

They will be the happier team with the draw, given the absence of injured defensive stalwart Luke DeVere and suspended striker David Ball, who joined Tomer Hemed and Jaushua Sotirio on the sidelines.

The point – the first the Phoenix have earned at their temporary home away from home this season – also keeps the New Zealanders off the foot of the table, clear of struggling Melbourne Victory.

The Wanderers threw on returning favourite Mitchell Duke and ex-Premier League midfielder Jordon Mutch for their first minutes of the season in the second half but will be left to rue their sluggish start to the match. 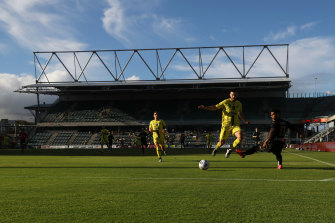 Wellington jumped out of the gates with Muratovic’s opener, which was deftly crafted by skipper Davila, who was cheered on all evening by the same crew of raucous, drum-bashing Mexican fans who turned up to their match against Sydney FC earlier this month to cheer on their countryman.

This time they were guests of the Phoenix, waving yellow club flags, and had their chanting accompanied by a saxophone – and with the Red and Black Bloc also in good voice, it made for a cracking atmosphere that lifted the players.

Wellington’s home end nearly had more reason to cheer in the 17th minute when the lively Reno Piscopo rattled the woodwork with a wicked half-volley, only for the ball to bounce harmlessly clear.

The Wanderers grew into the contest and were all over Wellington after half-time, with the introduction of Simon Cox, Duke, Kamau and Mutch off the bench – eye-watering firepower for any A-League side – turning the game on its head.

Yeboah and Kamau were both spotted at the back post for their goals in the 71st and 76th minute, by crosses from Keanu Baccus and Daniel Wilmering respectively, and Western Sydney looked home and hosed.

However, the Phoenix had the final say, with Alex Rufer heading Clayton Lewis’ set-piece across goal just three minutes later to Fenton, who was able to nod in the equaliser.