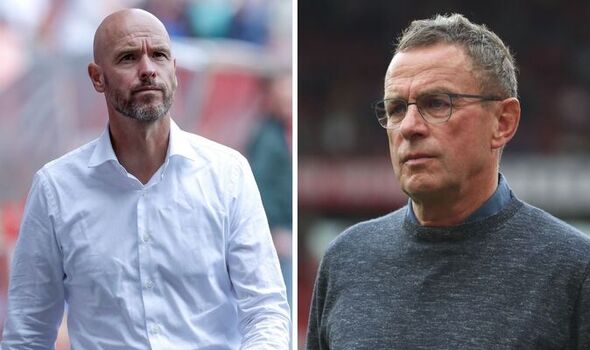 Manchester United chiefs have already decided their five priorities ahead of the summer transfer window when a blockbuster squad revamp is anticipated following the arrival of Erik ten Hag. The Dutchman is set to get to work immediately once the season has been completed with Ajax and the 52-year-old has already requested a say on transfers at Old Trafford.

He will know the size of the task at hand following United’s 4-0 midweek defeat to Liverpool at Anfield, with a number of the club’s players now playing for their futures.

Sky Sports say United have already decided to push for a new centre-back, two central midfielders, a winger and a striker before the start of next season.

There could be up to £200million to spend on new signings with several deals already thought to be on the agenda.

That includes Kalvin Phillips, who United are looking to sign having already drawn up the framework of the move.

Darwin Nunez and Richarlison are also on United’s list of attacking targets.

Ultimately, the club’s final budget could hinge on potential outgoings and the report also claims up to 18 players may depart.

Edinson Cavani, Paul Pogba, Jesse Lingard and Juan Mata will all leave upon the expiry of their contracts.

Meanwhile, Dean Grant and Nemanja Matic will also be heading for the exit door.

Several United players – including Cristiano Ronaldo – are also down to the final years of their contracts.

Beyond that, Dean Henderson, Anthony Martial, Eric Bailly and Brandon Williams could also be off.

United are unlikely to stand in anyone’s way who wishes to depart.

That was already made clear earlier this year when several of United’s players were alleged to be unhappy at the club after struggling to warm to Ralf Rangnick.

The German said up to 10 players could arrive this summer after the embarrassing demolition job on Merseyside in midweek.

“There will be a rebuild for sure but that does not help us when we still have five games to play,” Rangnick said.

“If you analyse the situation it is not difficult to analyse. For me, it is clear there will be six, seven, eight, maybe ten new players.

“Before you sign those players you need to be aware how you want to play.”