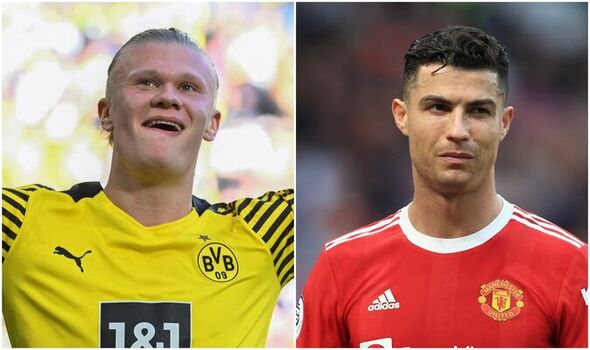 Manchester City have reportedly agreed to pay Erling Haaland a staggering £500,000-a-week – the same figure as Manchester United’s Cristiano Ronaldo. The reigning Premier League champions are understood to have ‘agreed terms’ with the representatives of the in-demand Borussia Dortmund star which will see him become the league’s joint-highest earner.

According to the Daily Mail, the 21-year-old has accepted the mammoth financial package offered by City as he moves one step closer to sealing an eagerly-anticipated transfer away from Dortmund. Wages of £500,000-per-week will see him match Ronaldo atop the Premier League’s payroll, comfortably ahead of City’s current highest-earner Kevin De Bruyne, who is believed to pocket around £385,000.

With the player’s terms agreed, City are now expected to trigger Haaland’s £63million release clause this summer to win the race for his sought-after signature. Pep Guardiola’s side appear set to pip a number of Europe’s elite to the signing of Haaland, as a five-year deal is expected to be reached with the Bundesliga outfit within the next week or so.

The Norwegian hitman struck a double in Dortmund’s thumping 6-1 win over Wolfsburg to bring his personal tally to 33 goals in 31 appearances for club and country this season. Haaland’s Bundesliga brace means the free-scoring forward has now hit an astonishing 82 goals in 85 outing since joining the Black and Yellows from RB Salzburg back in January of 2020.

In completing a deal for Haaland, City would be beating a number of top teams from across the continent to his signature. The likes of Real Madrid, Paris Saint-Germain, Barcelona and Bayern Munich are all believed to have expressed an interest in the Norwegian forward, however he now appears destined for the Premier League.

The Leeds-born striker looks set to follow in the footsteps of his father Alf-Inge by turning out for City in England’s top-flight. Dortmund were said to be hoping to persuade Haaland to remain in German for one more year, however his transfer saga now appears set to reach its conclusion come the end of the season.

City currently top the Premier League standings as they hold a one-point advantage over Jurgen Klopp’s Liverpool. Despite this, Guardiola’s side have appeared short up-front at times and the Spaniard has himself made no secret of his desire to add a striker to his star-studded ranks.

City failed in their pursuit of Tottenham’s Harry Kane last summer as attention has since turned to acquiring Haaland. Guardiola’s side are already one of the most-feared teams in world football and the addition of the Dortmund striker, one of the continent’s hottest properties, will see them become an even more formidable force.