Liverpool have received positive news from Scotland boss Steve Clarke on the fitness of Andy Robertson. The Reds were facing the daunting prospect of having none of their first-choice defence available for next weekend’s clash with Leicester, after Robertson picked up a hamstring problem while away on international duty.

He played the full 120 minutes in Scotland’s memorable penalty shootout triumph against Serbia in midweek, helping his country qualify for their first international tournament since 1998.

Speaking after the game, Robertson revealed he felt his hamstring tighten up, which was why he did not put himself forward for a spot-kick in Belgrade.

Scotland were beaten 1-0 in Slovakia earlier today and face another Nations League clash with Isreal next week before club football returns.

Robertson missed the clash but now Clarke has refused to rule out his return for the trip to the Middle East. 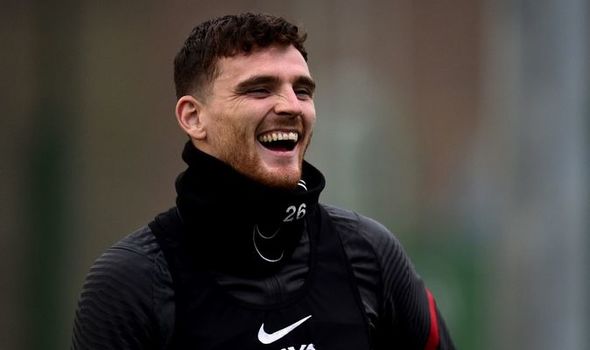 Klopp will be desperate to ensure Robertson returns to Merseyside without any further problems with Liverpool now down to bare bones at the back.

They have already lost Joe Gomez during this international break, after the defender suffered a serious knee injury in England training earlier this week.

Gomez was forced to undergo surgery but is now on the road to recovery alongside centre-back partner Virgil van Dijk.

Trent Alexander-Arnold is also out for around a month after damaging his calf muscle in the 1-1 draw at Manchester City.

It means as things stand, Robertson is the club’s only fit defender from Klopp’s favoured backline.

Liverpool do have back up in the form of Kostas Tsimikas, should Robertson not be fit for the visit of the Foxes on November 21.

Robertson told Sky Sports after the win in Serbia on Thursday night: “I think I was next or seventh [in the penalty order] but my hamstring seized up.

“Then in the second half of extra-time I had a bit of cramp, it was my left one as well so I was just a bit worried it was going to cramp up.”

Camavinga signs with ICM Stellar Sports after sacking his agent