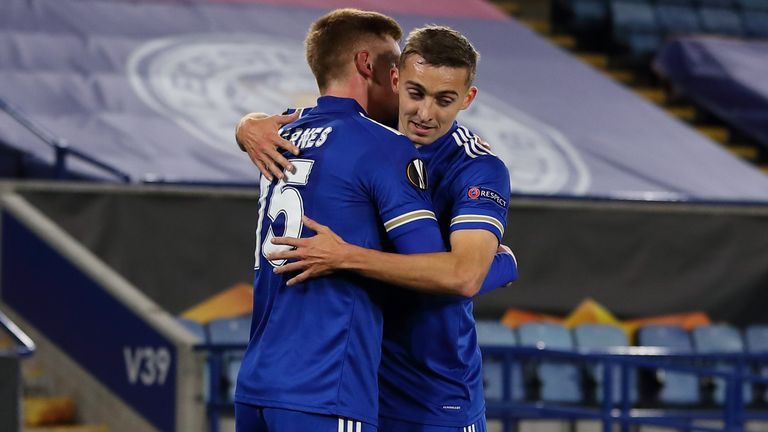 Leicester eased to a 3-0 victory over Ukraine’s Zorya Luhansk on their return to European action at the King Power Stadium.

James Maddison broke the deadlock (29) with a simple finish after Harvey Barnes’ shot struck the inside of the post before Barnes himself doubled Leicester’s lead with a cool finish on the stroke of half-time (45).

Brendan Rodgers’ men extended their lead when Kelechi Iheanacho pounced on a mistake by Dmitriy Ivanisenya to complete a comfortable night for the Foxes.

Leicester travel next to face AEK Athens, who were comprehensively beaten by Braga in the other fixture in Group G on Thursday. Man of the match: Harvey Barnes.

This was the first competitive meeting between Leicester and Zorya Luhansk, and the Ukrainian side made an encouraging start as Vladen Yurchenko saw an early speculative shot just clear Kasper Schmeichel’s crossbar.

Leicester, who made two changes to the side that were beaten 1-0 by Aston Villa, were competing in there first Europa League game since the 2000/01 season – and Schmeichel was forced to make a brilliant point-blank range save to deny Vladislav Kabaiev from Maxim Lunev’s cross after 22 minutes.

The miss proved costly as seven minutes later, Maddison was rewarded for his perseverance to nudge Leicester in front. Barnes was the orchestrator as he collected Iheanacho’s pass before cutting inside and striking the post. The ball fell kindly for Iheanacho, who readjusted his feet to set up Maddison for a simple finish. Iheanacho and Barnes combined once more for the latter to test the gloves of Mykyta Shevchenko in the Zorya goal before a poor clearance from Schmeichel nearly led to a soft equaliser as Dmitriy Ivanisenya was unable to sweep his shot from distance into the unguarded net.

James Maddison made his second start of the season in Leicester’s Europa
League opener against Zorya Luhansk.

Wes Morgan, Marc Albrighton and Cengiz Under were named on the bench.

Moments later, the hosts doubled their advantage as Barnes ran on to collect Iheanacho’s back to lift his shot superbly over Shevchenko – and Rodgers’ men were dominant in the second period. Wesley Fofana came close to stretching the lead when he rose to meet James Maddison’s corner but could only plant his header wide. Maddison was next to go close as he took Barnes’ pass from the left but after a sublime piece of footwork, he could only curl his shot over the bar.

But Leicester didn’t have to wait long for their third as moments after Maddison’s withdrawal, a slack pass from Ivanisenya allowed Iheanacho to score the goal his performance deserved as the Foxes got their Europa League campaign off to a fine start.

The second half was a formality, and having not operated in what is now known as the Europa League for 20 years, this was an early statement of intent from Leicester. Leicester boss Brendan Rodgers told BT Sport: “It’s nice to get off to a good win in the first game, with a clean sheet which was important. We had to work very hard in the game and there are still aspects we can be better in but we can have no complaints.

“I’m very pleased for the players as Zorya played a 4-4-2 diamond. It’s a system you can have joy against on the outside but they can hurt you on the inside. We had joy going forward, but they were a threat at times. In the second half, we went to a 4-4-2 diamond ourselves as we looked to fill the game, and we still managed to create chances on top of that.”

“The players deserve a huge amount of credit for carrying out what I asked of them and we managed to keep the clean sheet. At the top end of the field, we still need a bit more movement as were a bit static at times, but the front three did well and the goals will be good for confidence levels.”

Man of the match – Harvey Barnes Leicester had two Englishman (Maddison and Barnes) score in a single European game for the first time since September 1961 against Glenavon in the Cup Winners’ Cup (Kenneth Keyworth, Hugh McIlmoyle and Gordon Wills).

Having been unfortunate not to open his account for the season during the recent 3-0 defeat to West Ham, and been disappointing in the defeat to Aston Villa, it felt as though Barnes had a point to prove.

In Jamie Vardy’s continued absence with a calf injury, Leicester have been seeking a functioning Plan B, and with Barnes, Maddison and Iheanacho working so well in tandem, Rodgers will been keen for the trio to build on this free-flowing display in the competition. Leicester travel to face Arsenal in the Premier League, live on Sky Sports Box Office on Sunday; kick-off is at 7.15pm. The Foxes return to Europa League action next week when they travel to face AEK Athens at 5.55pm on Thursday.

On the same night, Zorya Luhansk host Braga as the group stage continues.