Competition is intensifying between eight Australian and five New Zealand cities who are battling each other to impress FIFA officials to win the right to stage matches in the biggest women-only sports event on the planet, the 2023 Women's World Cup.

Officials of world soccer's governing body hope to arrive in Australia and NZ in the new year to cast their eye over prospective venues for the tournament, and local soccer bosses are determined that they will pick stadia that only provide a legacy for soccer, not Australian rules football.

Football Federation Australia chairman Chris Nikou confirmed the visit, although they are dependent on the quarantine regulations that are in place at that time. 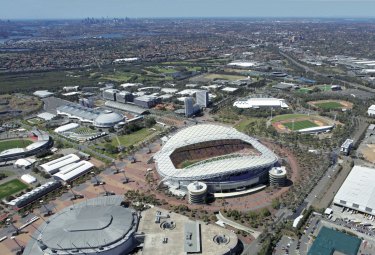 The Homebush stadium, in Sydney’s west.

"There is a planned visit from inspectors in January with a decision on the successful host cities in February. There have already been virtual meetings and plenty of discussions remotely, but they do want to come and physically look at them if they can," Nikou said.

He said FFA had steered away from recommending predominantly AFL and cricket venues in its bid because it was conscious of leaving a legacy for soccer.

"We want our game to benefit from putting on such a major global showcase tournament. There is no point in us helping get investment for AFL grounds; this World Cup represents a great opportunity for football to gain not just status and publicity but real investment and a boost to the infrastructure for the game," he said.

Australia has put forward eight potential venues in seven cities – two in Sydney and one each in Melbourne, Adelaide, Perth, Brisbane, Newcastle and Launceston.

New Zealand has proposed games should be staged in Auckland, Wellington, Dunedin, Christchurch and Hamilton as prospective match venues.

FFA has proposed that a minimum of 10 venues be used although FIFA has the final say. The opening game will be in NZ, while the final will be at Homebush in Sydney.

In France, where the last Women's World Cup was held in 2019, 12 stadia and cities bid but nine were selected, so there is potential for disappointment if FIFA bosses decide that not all bidders will be chosen.

Nikou says there has been discussion with state governments and their tourism bosses who see hosting matches as important drivers for their economies, especially if the coronavirus crisis is over by 2023 and international travel has resumed to the level that was considered normal pre-COVID.

'"It is the biggest female sporting event in the world and hopefully as things get back to a form of normal and the tournament comes closer then interest will continue to build," Nikou said.

Is Everton vs Leeds on TV? Kick-off time, TV channel and how to watch Premier League fixture

Ancelotti confident his Everton squad can cope without Lucas Digne