18:40: For those living under rocks are had something better to do with their lives on Saturday – this is how the first leg went down.

Kemar Roofe hit a second-half winner to give Leeds a slender 1-0 advantage over Derby.

Roofe coolly slotted home after 55 minutes for his fourth goal against the Rams this season.

Leeds were left breathing a huge sigh of relief when referee Craig Pawson overturned a decision to give the home side a penalty with 12 minutes to go, after Jayden Bogle and Jack Harrison collided in the box.

Something a certain Mr Lampard was not too impressed with.

18:35: Hello everyone and welcome to our LIVE coverage of Leeds vs Derby.

But who knows – if I run out of content later perhaps I’ll mention it up again. Exciting, eh?

Moving swiftly on, tonight’s Championship play-off semi-final at Elland Road sees Frank Lampard’s Derby look to overturn a 1-0 deficit from the first leg if they are to keep alive their promotion dream.

However, NONE of the previous 17 teams to lose the first leg of a second-tier play-off semi-final at home have progressed to the final.

Yesterday’s clash at The Hawthorns was no different. What do they say? Records are made to be broken… 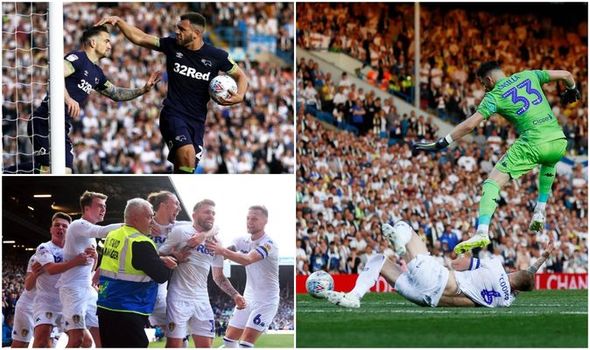 Leeds have been dealt an injury blow as Kemar Roofe has been ruled out of the return leg of their Sky Bet Championship play-off semi-final against Derby.

Roofe’s 15th goal of the season secured Leeds a 1-0 win on Saturday at Pride Park in the first leg, but he will play no part at Elland Road on Wednesday due to a calf strain.

Patrick Bamford is expected to start in Roofe’s absence after serving a two-game ban, while Pontus Jansson remains doubtful and Adam Forshaw, Tyler Roberts, Barry Douglas and Gjanni Alioski are definitely out.

Derby are hoping that Martyn Waghorn will be fit. The 13-goal striker missed the first leg with an Achilles injury but he has been training since.

Left-back Ashley Cole could also be involved after he resumed training following an absence with a groin injury.