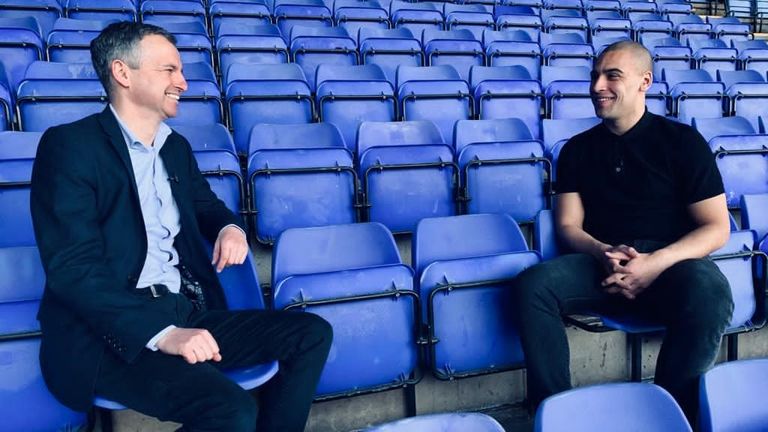 “It was the perfect day.” James Vaughan has spent half his life playing professional football, but nothing he has experienced compares to his very first game.

Now, aged 32, the Tranmere Rovers striker is still thriving in the game and enjoying a promotion push in League Two with the Wirral club. Vaughan was just 16 years and 271 days old when, across the Mersey, Everton manager David Moyes sent him on for the final quarter of an hour at Goodison Park with the instruction to, “go out there and enjoy it”.

It was April 10 2005 and Everton were fighting tooth and nail and for a Champions League spot, occupying fourth place in the Premier League, ahead of city rivals Liverpool. Three goals up against Crystal Palace, Moyes decided the moment was right to introduce the academy graduate to the home support. 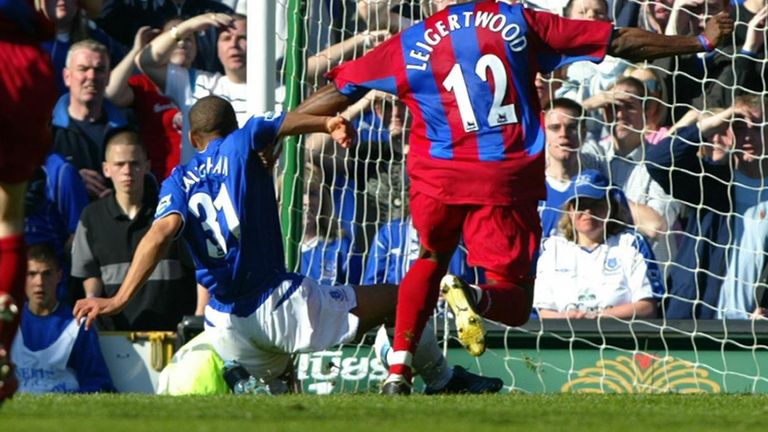 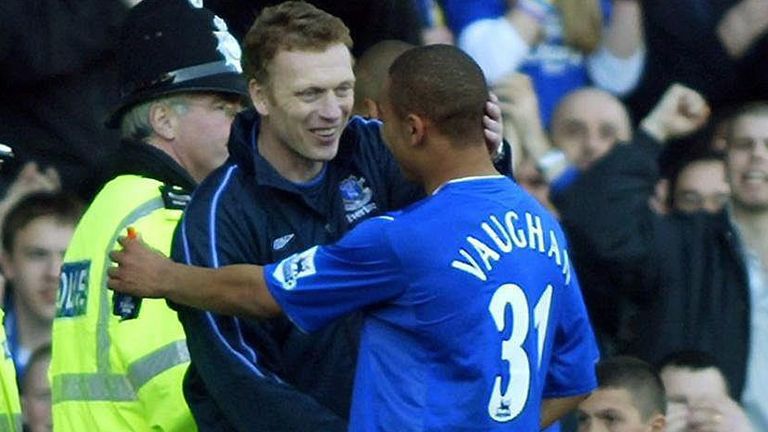 “It was the perfect situation, as a young lad, coming on for a game where we were in control,” Vaughan recalls. “It was all a bit of a blur. I remember making a tackle and the crowd went mad and I just thought if I kept doing that, I’d be alright. And I remember the goal clearly, I can’t forget that. The keeper rolled it out to Leon Osman, then Kevin Kilbane took it on the overlap and put in a great ball. I always say I owed him a lot.”

“It was a fantastic team,” Vaughan continues. “It was a group of lads working for each other, working for the manager and the staff, and the atmosphere around the place was fantastic. The manager managed to get the most out of the players we had at the time and that showed in the results we were getting. All that squad from when I made my debut like Lee Carsley, Alan Stubbs, David Weir, Duncan Ferguson – just to mention a few – those senior pros, they were old school. Alan Irvine and David Moyes were brilliant with me at the time. All of it, it was just a fantastic education to the game. The whole feel about the place was old school and it brought me up in that manner and I still play the game like that now.”

With the creativity of Mikel Arteta and Tim Cahill supplementing the more physical elements of the side, Everton had become a considerable force. So, was it intimidating to come into a side full of such established stars? 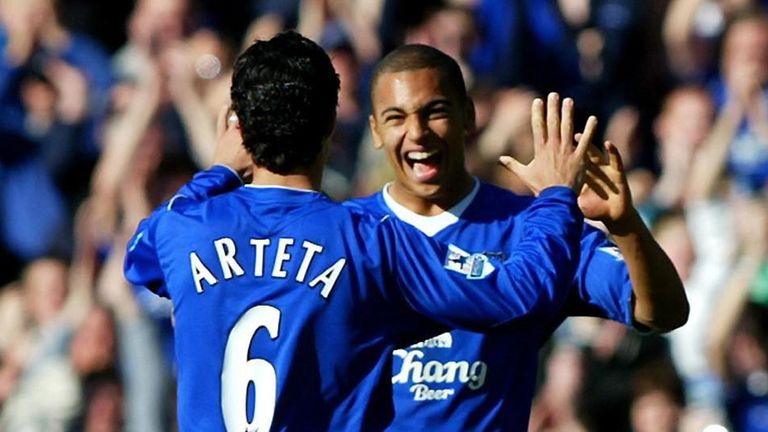 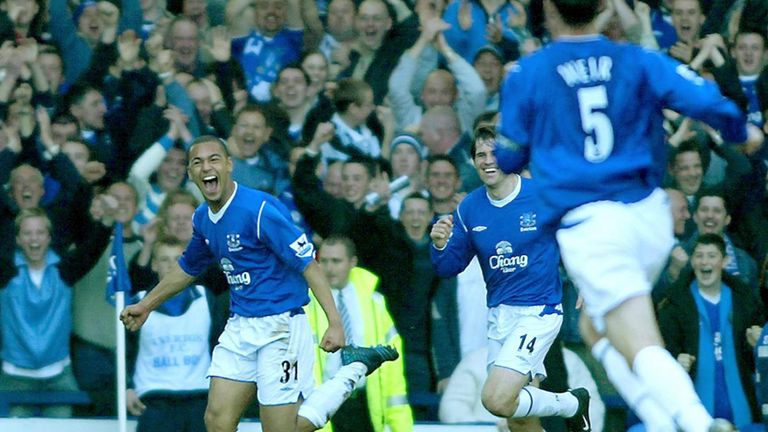 “Because I was so much younger and they were all senior, they just looked after me. I remember playing in a game with Duncan Ferguson and someone smashed into me. He just said, ‘I’ll get him back for you, don’t you worry’. It was just a case of them looking after me. As a 16-year old, you’re fearless and you just want to go out there and play the game you’ve dreamt of playing, and that’s what I did.”

Fearless. That trait often ascribed to a prodigious talent on the way up. Vaughan’s goal broke Wayne Rooney’s club record and James Milner’s Premier League record. Vaughan had every reason to think his career could follow a similar path but he was struck down with several injuries at a young age, notably a knee ligament injury while playing with England U18 team.

“I don’t think it’s possible to stay fearless,” he adds. “As you become a first team player regularly there’s people’s wages, jobs and careers on the line. You know you’re responsible for part of that, and you have to take that responsibility on. But as a kid you don’t have that so you can just go out and play and enjoy your football.”

Six years on from his debut, after loan spells at Derby County, Leicester City and Crystal Palace, Vaughan realised he had to look beyond Everton for regular first-team football.

“It was definitely a tough decision, but it was something I knew I had to do. I got to the point where I was 22 and I wanted to play. But with Louis Saha and Yakubu in front of me it was going to be difficult at the time. So it was a decision I had to make to go and play some games and see where it got me. I’ve managed to achieve a lot of things I could only have dreamt of as a kid so I’m very fortunate, but I’m dead grateful to Everton because without that grounding I would never be here today still playing.” 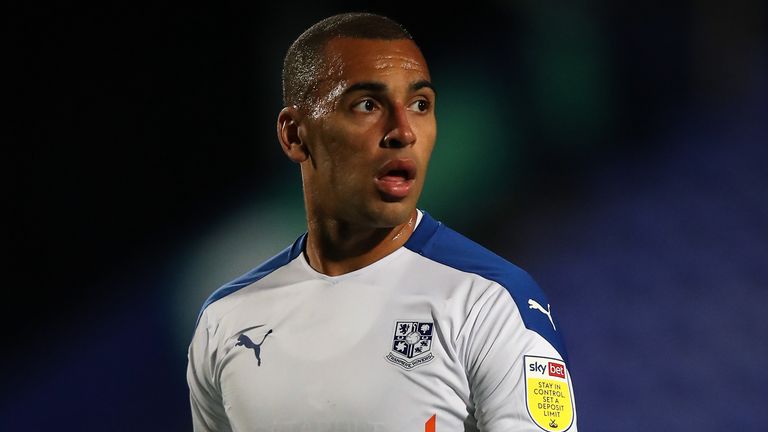 Vaughan’s 18 league goals before injury struck once more, ruling him out of action since the end of February, have helped Tranmere Rovers mount a title challenge in League Two. They were relegated in controversial circumstances last season, after a majority of League One clubs voted to end the truncated 2019/20 season using a points per game method. Micky Mellon’s side were placed in 21st position, 0.04 points behind Wimbledon. Mike Jackson took over in the summer, but was soon replaced in the autumn by Keith Hill after a poor start to the 2020/21 campaign. Those players who remained have been spurred on by the off-field events of last season.

“Everyone knows what happened, it wasn’t right,” Vaughan says. “I believe that if the season had continued we would have stayed up. We were coming into some good form and that’s definitely been a little chip on our shoulders. We want to put that right and the lads have all bought into it. We’ve just been working for each other and hopefully we can keep the record straight. The manager and assistants Ian Dawes and Andy Parkinson alongside him have been fantastic. They’ve kind of let us manage ourselves, set a framework for us and we’ve gone along with it. It’s been really successful so far so hopefully we can get the job done.” 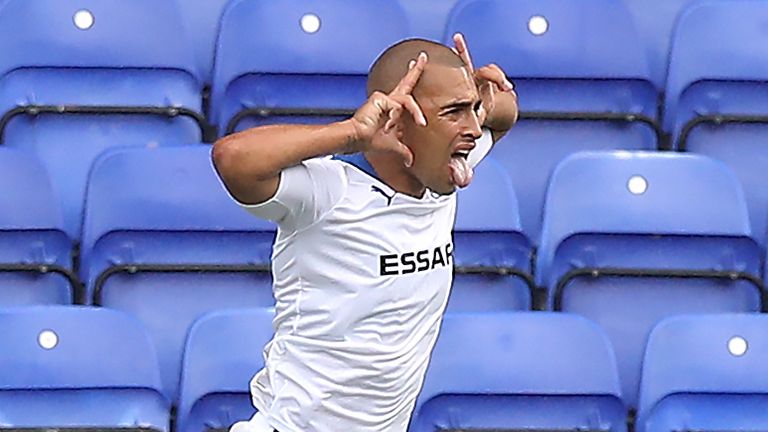 Vaughan’s hopes for the club extend beyond promotion. It is 20 years since Prenton Park staged football at Championship level, even dropping as low as the National League for three seasons between 2015-18, but the striker has been impressed with the work of chairman Mark Palios and the board.

“The club has got great foundations. There’s a good feel about the place, it’s a good family club and everyone looks out for each other and helps each other out. I’m sure, with a bit of luck too, the success can come back. The club has been perfect for me, where I am in my life. It’s local to home and the lads are brilliant. Some senior players with some young lads and we play some good football, so I’ve managed to benefit from that this season and I’m really enjoying it.”

Vaughan is open minded about how much longer he will remain in the game, aware that injuries have always played an intrusive part in his career. And there will be a reminder of that record-breaking start to his professional life when Everton take on Crystal Palace at Goodison Park on Monday, almost 16 years on from his debut.

“At the time you don’t really take in what you’ve done, but my little boy is starting to get into football now so it’s a really proud thing for me to show him,” he adds. “Everton is always going to be close to my heart. I’m really grateful for everything they have given me and to be part of their history is something I’m really, really proud of.”