'I was in so much pain': Coufal's fight to be ready for the Hammers

‘I was in so much pain, my wife had to help me out of bed’: Vladimir Coufal’s incredible fightback from a groin injury to be ready for West Ham’s historic week including their first European semi-final in 46 YEARS

Before he leaves the dressing room for two of the biggest games of his career, Vladimir Coufal will do what he always does.

He will kiss the bracelet his wife gave him and place it on his seat. He will strap tape around his other wrist, pick up the ball that is left for him by the kitman and make his way out on to the pitch.

Coufal knows how big this week is in the history of West Ham. A trip to Chelsea with slim hopes of the top four still alive before the big one on Thursday: a Europa League semi-final first leg against Eintracht Frankfurt, the same side they faced — and beat — in their last European semi-final 46 years ago. 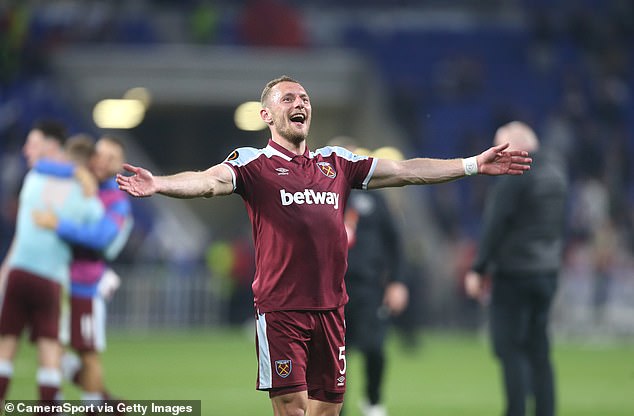 Nevertheless, for Coufal, he won’t change a thing. ‘It is historic for West Ham,’ says the Hammers full back. ‘I am quite superstitious and I have my rituals but it is not just about the massive games.’

For Coufal, son of an Olympic gymnast and brother to two international figure skaters, it will be about more than just the occasion. It was only two months ago that he was in so much pain due to a groin injury that he could no longer walk, he says, ‘like normal people’. His wife Hana had to help him in and out of bed.

The Czech international suffered the injury during the Euros but played on through pain for most of the season. His performances slumped because of it. It was only after limping off against Leicester in February that he had surgery.

‘I didn’t want to make an excuse about my performances,’ he says. ‘It was my decision to play with pain. I was taking medication every day, small tablets in the evening, and I was able to play with some level of pain. After the Leicester game it was breaking point. 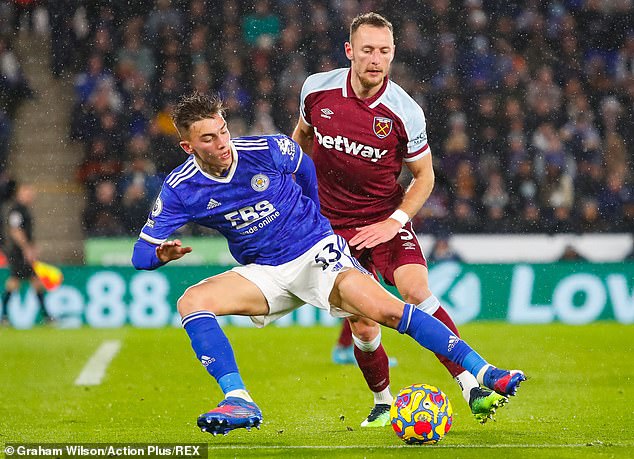 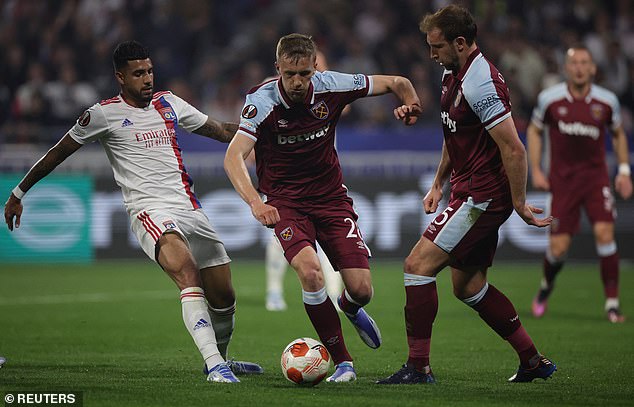 Filip Kostic walked over to the Eintracht Frankfurt fans in the Nou Camp and held his shirt aloft.

He had scored twice and set up another as the Bundesliga club beat Barcelona to book their place in the Europa League semi-final. ‘Best No 10 at the Nou Camp,’ tweeted Frankfurt’s official account in a dig at Barcelona and Lionel Messi, the man who wore that famous shirt there for so many years.

Now, Frankfurt take on West Ham in the final four. Here’s the lowdown on the German side…

ON STRIKE TO RIGHT ON TARGET

Kostic’s display in Catalonia took him to seven goals and 12 assists this season, the most of any Frankfurt player. He refused to train last August as he tried to force through a move to Lazio. Colombian striker Rafael Borre is the top scorer with nine.

Oliver Glasner’s side have only lost once in Europe and even that went to extra-time and they won on aggregate. Yet in the league Frankfurt have won just three of their last 14 and sit ninth.

HOW MANY FANS WILL GET IN THE GAME?

Around 30,000 Frankfurt fans found their way into the Nou Camp despite an allocation of only 5,000. West Ham have said they will ban any home fans who sell them their tickets for this week’s home leg against the Bundesliga outfit.

WILL HISTORY REPEAT ITSELF FOR HAMMERS?

Frankfurt were West Ham’s opponents 46 years ago in their last European semi-final. Trevor Brooking scored twice in the Cup Winners’ Cup home leg as West Ham won 4-3 on aggregate, only to lose to Anderlecht in the final.

‘I couldn’t get out of bed and couldn’t walk like normal people. My wife helped me a lot, the medical staff too. I had a lot of time to think about my decision to carry on playing but I’m of an age where it’s difficult to change my personality. Even if it’s just a little bit possible, I want to play.’

He’s not the only one. He smiles when reminded of Craig Dawson playing on with a bloody nose, his fellow Czech team-mate Tomas Soucek sporting cuts and scars.

‘That is the West Ham DNA,’ Coufal says. ‘To never give up. We are fighters.’

When he wasn’t playing, he found it hard. ‘It wasn’t easy with me mentally because one day you are full of energy and excited to train and another day you feel a little bit of pain inside your wounds and it’s not a good feeling,’ Coufal says.

‘I need to enjoy football. I like every session. I am that guy who enjoys it, and when you’re thinking that you cannot kick the ball properly without knowing the pain, it’s not a good feeling. I have started to enjoy it again and it is beautiful.’

Coufal returned earlier this month, five weeks after surgery, starting the with the defeat at Brentford before the 3-0 win in Lyon that secured their place in the Europa League semi-final. He is used to setbacks by now.

Coufal is still driven on by the frustration of being released as a teenager by Banik Ostrava, his local club near Ludgerovice, a small village in the east of the Czech Republic with a population of just under 5,000.

‘They said I will never play professional football because I was too small, too weak. They destroyed my dream and sent me to play for a team with 40-year-old men in the third-lowest division in Czech Republic. The guys played for sausages and beers after the game. It’s still inside of me, this feeling.’

When Banik Ostrava tried to resign Coufal later in his career, he refused. Then there were family pressures to contend with.

He is now. A £5.5million move from Slavia Prague in 2020 to the Hammers, a club transformed under David Moyes from relegation survivors to European semi-finalists and Champions League hopefuls. 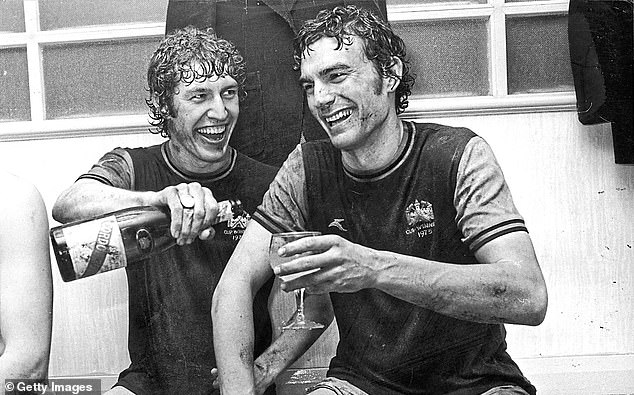 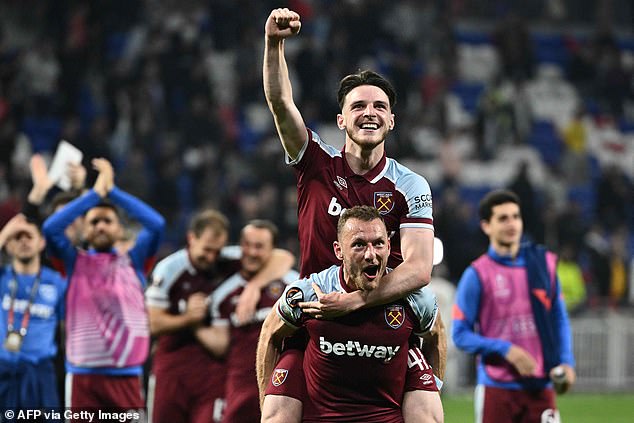 If West Ham win the Europa League, they will take their place in the Champions League next season. Finishing in the top four is still an outside possibility with Chelsea, Arsenal and Man City still to play. Yet three wins in their last nine league games and a raft of defensive injuries, including Kurt Zouma, do not play to their favour.

But these are the clubs with which West Ham strive to compete with, an elite of which they wish to be a part. Coufal knows, though, there is still a way to go.

‘We were able to beat Liverpool and Chelsea at home so I could say we are not far from them but also some games we lost like away to Burnley,’ he says. ‘Liverpool, for example, don’t have these losses. Sometimes we are not so far but sometimes we are very far.’

By the end of this week, they will see just how close they are. 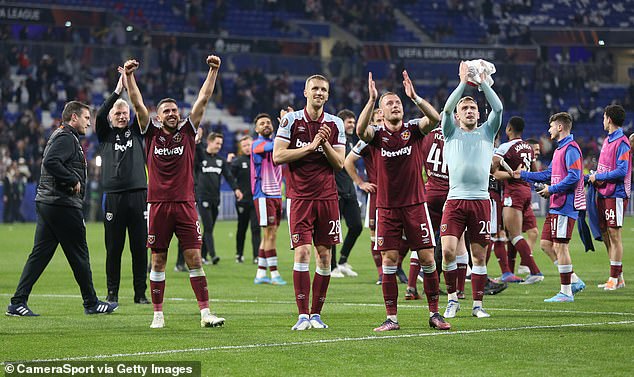