Cantona was the catalyst and Bruce’s brace against Sheffield Wednesday sealed it… but Shearer’s injury helped: Thirty years on, how Manchester United won the inaugural Premier League season

In our second piece marking the 30 year anniversary of the Premier League’s first season, Sportsmail tells the story of the season on the pitch which culminated in Manchester United winning their first top-flight title for 26 years.

After all planning, hype and build-up, the eagerly-anticipated opening day arrived on August 15, 1992.

In contrast to the cosmopolitan league of today only 14 of the 242 players who started the first round of games were foreign, compared to 130 last season, while 16 of the managers were English and the remaining six Scottish.

On the pitch, the first weekend was a sign of things to come during the debut Premier League season – the division’s strikers were central to the story. 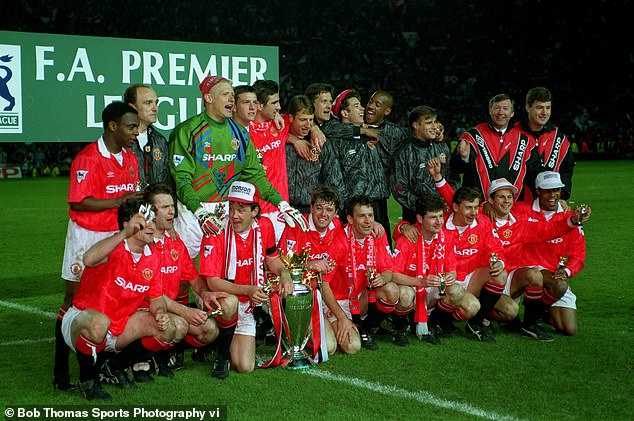 Down at Arsenal, Sutton remembered: ‘We were 2-0 down and 15 minutes into the second half [manager] Mike [Walker] made an inspired substitution – he took me off, put Mark Robins on and Norwich end up winning 4-2, Robins scoring a brilliant chip, and we were off and running. It’s amazing what a bit of confidence can do. We had lost every pre-season game and were as surprised as anybody.’

At Crystal Palace, £3.6million English record signing Alan Shearer was finally showing his Blackburn team-mates what the fuss was about.

‘In pre-season he didn’t show any of the form that warranted that type of fee,’ Blackburn goalkeeper Bobby Mimms said.

‘Being brutally honest as a bunch of players we were probably thinking “what have we signed here?”

‘Alan will be first to admit he hated running. Pre-season was all about that and he was stiff and achy. I’ve only beaten one person on the longer running because I’m no athlete myself and Alan is that man!

‘Then when the balls come out, God he can run. As soon as the season started, what a player. He’d run his socks off for the team, scored unbelievable goals, every type you could imagine. The first game, he smashed two in from outside the box and you’re thinking “God, we’ve got a player here.”

Mimms also remembered Blackburn’s 3-3 draw at Palace for another reason.

‘That was the first season where the referees could wear green and [team-mate] Kevin Moran was colour blind and Kenny [Dalglish] says “you can’t play in green,’ the colour of our goalie top,” Mimms said.

‘So on the hottest day of the year, I end up in a big thick rugby top. Kevin said if I’ve got the same colour on as the ref he’ll end up passing to him! It didn’t impact me, apart from me thinking “you look like a scruff on the opening day of the season.” 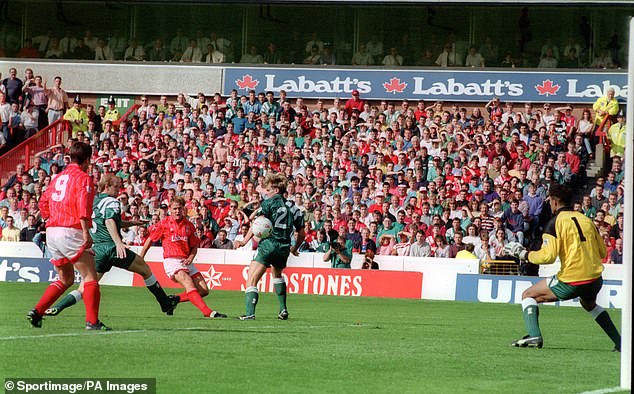 It was his final Forest goal before a £2.1m move to Tottenham, where he scored 21 more to win the golden boot.

And, according to former team-mate Roy Keane, it was a sale that led to Forest’s demise and eventual relegation, confirmed on an emotional May day that doubled as legendary manager Brian Clough’s final home game in charge.

Buoyed by opening day victory at Arsenal, Norwich were the surprise Premier League pace setters until the end of December.

Though in November, Manchester United signed Eric Cantona from defending champions Leeds, a shock £1.2m capture that transformed their season and proved the catalyst for their era of Premier League dominance.

Parker said: ‘Steve Bruce and Pally [Gary Pallister] said good things about him to the boss because when they were up against him at Leeds and the boss listened. He really believed what they were saying about players and sometimes you have to listen to players. Good managers, top managers listen.’ 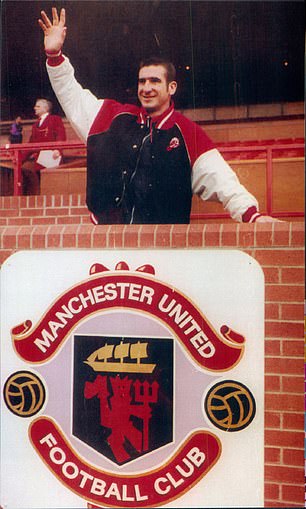 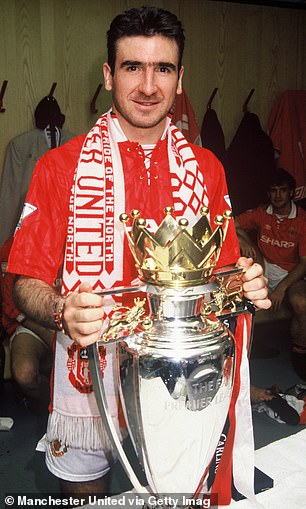 Cantona’s impact was transformative. In his autobiography, One, former United goalkeeper Peter Schmeichel said: ‘Thanks to Eric suddenly individual training became the culture. One of Eric’s biggest contributions was demonstrating an awareness of what the job of a footballer should be. He infused a culture that you can actually improve your skills without having a coach there helping you.’

Parker, a long-time Prostate Cancer UK ambassador supporting the charity’s upcoming Football March in September, added: ‘Manchester United’s first title was predominantly about Eric Cantona. There were [good] players there but sometimes you need that maverick, someone who can play off the cuff, do something different. He raised everyone, got the fans really believing that it was going to be that season. No other player in that era could have walked into a football club and did what he did.’

United were bottom of the first ever Premier League table published after losing their first two games and eighth when Cantona joined but went top for the first time after a 4-1 win against Spurs that would have pleased Ferguson for more than just the swashbuckling nature of the performance.

‘He wasn’t keen on London teams, didn’t want to lose to them. Hated it,’ chuckled Parker, who scored his only United league goal in the Old Trafford game. 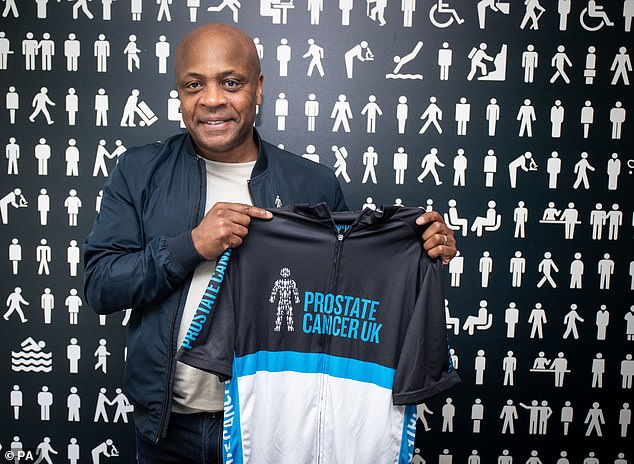 ‘I don’t know why he just kept wanting to tell me and Paul Ince how he hated London teams.

‘He would have been really smiling because to beat Spurs and go top of the league as well would have definitely made his weekend.’

Shortly before that on Boxing Day, Shearer suffered the season-ending knee injury against Leeds which robbed then second-placed Blackburn of their best hope of remaining challengers.

‘That injury put us on the back foot,’ now-Norwich academy goalkeeper coach Mimms recalled of the setback for 16-goal Shearer who, despite not playing again, ended the season only six short of top scorer Sheringham.

‘We thought we could do something really good that season which we did but it was a disappointing because you lose Alan’s goals out of the team and it is difficult to replace. He came back a different player to be honest, more of a target man, stronger player, still as effective but a different player I think.’

Hard as it is to imagine now, it was not until February that the Premier League’s first sacking came when the late Ian Porterfield lost his job following a 13-game winless run and was replaced as Chelsea manager by David Webb in what was also, incredibly, the only managerial change during the season.

‘This is the first time I’ve ever heard of it when you just said that,’ a stunned Webb told Sportsmail. I ‘I’ve got a badge now. I scored a winning goal in a Cup final [1970 FA Cup] and was the first manager to replace a sacked manager!’

Webb, who steered Chelsea to safety that season, may have made another notable contribution to English football had things turned out differently.

He said: ‘I remember writing to Martin Edwards when I owned Torquay saying we should have a 100-club league, one Premier League, first and second division north and first and second south. That way the local derbies would keep bringing in the money for the clubs at the lower levels. He wrote back and said it was a good idea bit the powers that be at the top already had their mind made up and their only concern was getting their breakaway. They weren’t worried about the old Football League, only what ended up as the Premier League.’

Back on the pitch, without Shearer, Blackburn’s form inevitably suffered while United, Norwich and Aston Villa took turns to occupy top spot until a defining week in April.

In a Monday night fixture United travelled to Norwich for a crucial head-to-head and all but ended the Canaries’ title hopes in a stunning display of counter-attacking football. 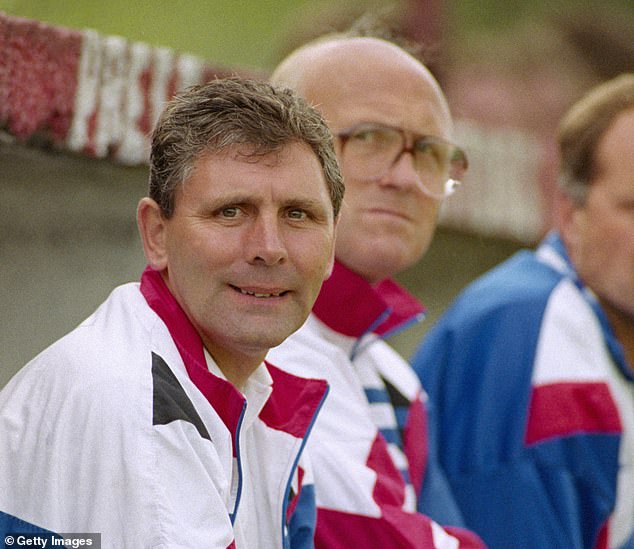 Sutton said: ‘It was deemed as a bit of a head-to-head and if we won it we could have gone on to win the Premier League. They wiped the floor with us. It was 3-0 at half-time [and 3-1 at full-time], I was centre-half and watching back I made some terrible decisions.’

Though having nearly got relegated the previous year, losing every game in pre-season, being among the relegation favourites and having a new manager in Walker, Norwich’s eventual third-placed finish was still a remarkable story from the 1992-93 season.

It was also the highest a club have ever achieved with a negative goal difference, Norwich finishing on minus four.

‘Now there’s a massive difference in terms of budget between the teams at the top and bottom but it was more of a level playing field at the start of the Premier League era.

‘Looking back you think “blimey it would have been lovely to take that next step” though maybe we never had that necessary mentality and belief within the club but there was a nice freedom about the club and the way we played.’ 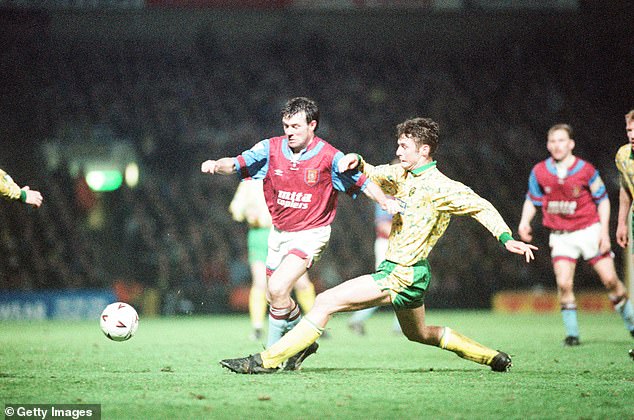 United followed their Norwich win with their most dramatic victory of the season against Sheffield Wednesday thanks to two late Steve Bruce headers, including a 96th minute winner.

Parker said: ‘It was a huge day. The boss might have made one of his best ever managerial decisions in that game – he took me off! It was to bring an extra forward on and all of a sudden it all changed.

‘It was one of those games when you know something was meant to be. If it didn’t happen against Sheffield Wednesday all the bad memories of Easter the previous season when [United won just one point from four games in eight days] and Leeds won the Championship we would have revisited. A defeat would have been a nightmare mentally.’

Instead United staged one of those comebacks that helped create the legend of Fergie time.

Schmeichel said: ‘Without ’93 there might have been no ’99 (the Treble sealed by two injury time goals in the Champions League final against Bayern Munich.’

Parker added: ‘There are always little margins that make a difference, maybe in a lifetime, and that Sheffield Wednesday game, that added to Manchester United’s already great history. Those two Steve Bruce goals, if that didn’t happen, so much after could have all gone completely wrong.’

United did not look back after that, remaining top for the rest of the season and being handed the league title after nearest challengers Villa lost at home to Oldham ruining the hoped-for script of the first title being sealed on Monday Night Football in front of a live TV audience. 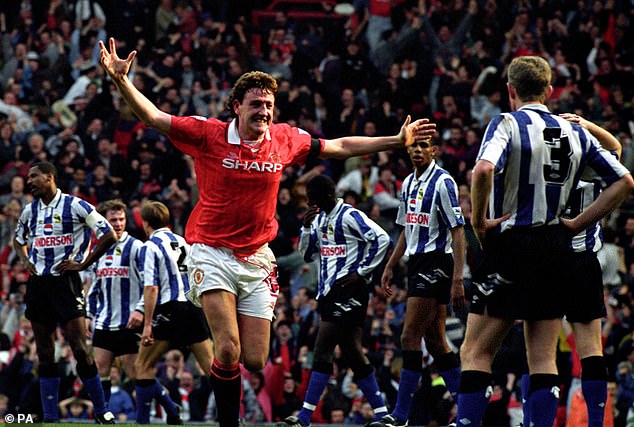 Darke said. ‘I was commentating on the Sunday and Martin was going to do the Monday one [instead] as the number one commentator to do United’s big crowning moment but it was something of an anti-climax.’

Bruce, it turns out, also was not overly-impressed with the commemorative mini-Premier League trophies United were given instead of medals for winning the first title, which were made by renowned jewellers Asprey and cost around £1,400 each.

‘He said ‘it looks like an effing darts trophy’, Parker laughed. ‘But once you put them inside the blue box it looks proper. It’s a bit different to a normal medal and that’s what makes it stand out.’

United’s joy at ending their 26-year title wait was in stark contrast to Crystal Palace’s pain as they were relegated at Arsenal on the final day, joining Middlesbrough and Forest in going down as Oldham produced an inspired run of final-week form to pull off a miraculous escape and survive on goal difference.

Salako said: ‘We went down on 49 points. I remember we won the last home game [against Ipswich] did a parade on the pitch, convinced we had done enough and by the end of the next week [after Oldham won their last three games] it was heartbreak. So devastating to go down from the Premier League because it is the magic circle, the cream and where everyone wants to play.’

Thirty years on that is one thing about the Premier League that has not changed. 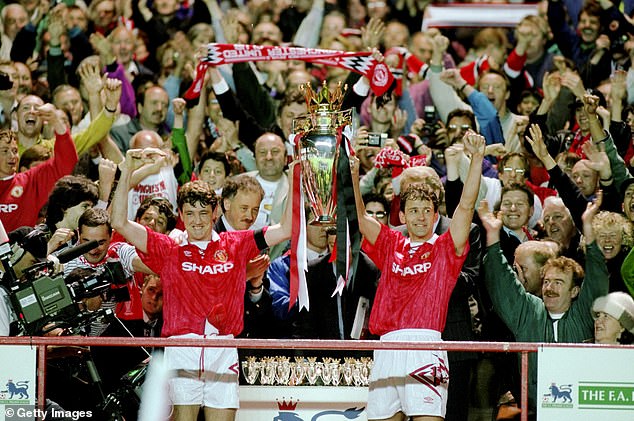