From thrilling to miserly… is THIS the way Liverpool can win title?

From intoxicating and thrilling to miserly and undefeated… is THIS the way Liverpool can win the title?

As thrilling as it was it couldn’t really go on. Watching Liverpool last season was too often like a visit to a theme park. You didn’t quite know what would happen, only that you would enjoy yourself.

Games — particularly at Anfield — were breathless, intoxicating experiences. Liverpool scored goals like the world was about to end but occasionally they defended like that too. It made Jurgen Klopp’s team the best watch in the Premier League but whether it was football designed to win the Premier League was another thing entirely.

So far this season, things have been a little different, partly by design and partly by coincidence. Klopp has tweaked his team’s pressing game a little to make sure they are not so exposed high up the field when it doesn’t work. Equally, some of his forward players are short of last season’s exalted standards. 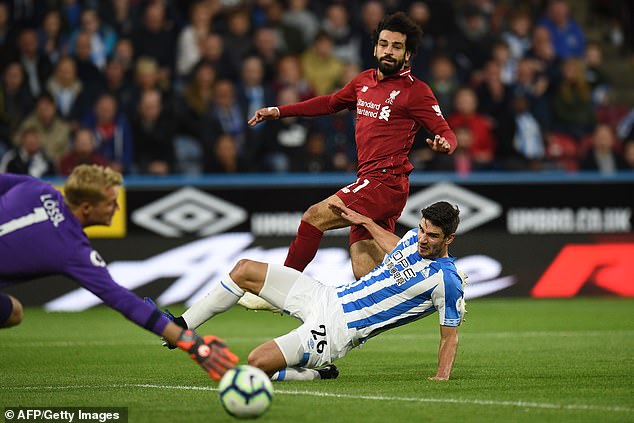 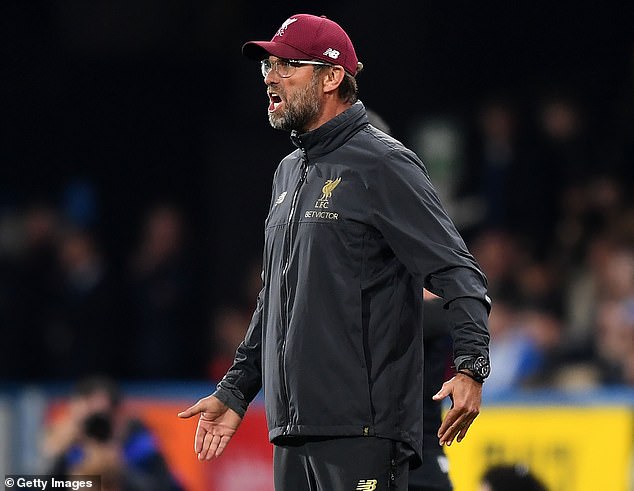 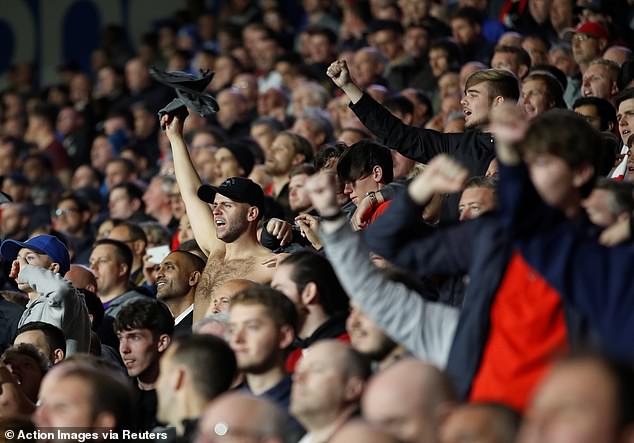 They conceded just 16 goals in their 42 league games, with only four at Anfield, and kept 28 clean sheets.

Currently this adds up to an unbeaten start to the season and some surprising numbers. Liverpool have conceded only three goals in nine league games. If that were to carry on, they would beat that incredible record of 16 league goals conceded in the 1978-79 season 40 years ago.

Just as surprising is that Klopp’s team have scored just 16 times in the Premier League so far. That is the same number as Bournemouth, 10 fewer than leaders Manchester City and only one more than Jose Mourinho’s mundane Manchester United.

So, yes, Liverpool are different so far this season and there was evidence of that here in West Yorkshire. Klopp was right when saying Liverpool’s attack suffered on the back of some uncharacteristically poor final passes. They scored one lovely breakaway goal but passed up opportunities to fashion a couple more.

However Liverpool were much better without the ball than they were last season. Huddersfield played well and looked particularly dangerous when they worked the ball to wide areas. 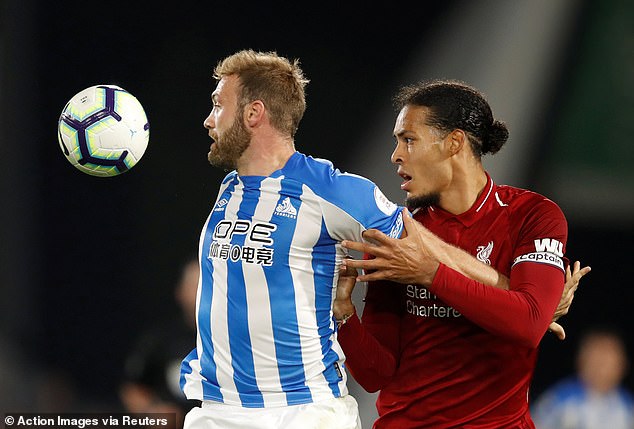 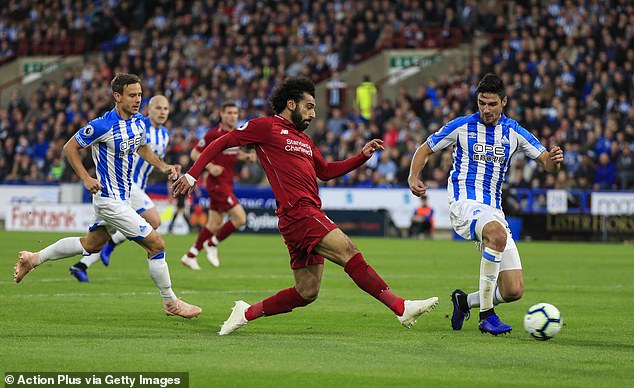 But after seeing a good handball penalty appeal waved away in the first half, David Wagner’s team were never able to regularly penetrate Liverpool’s back four.

Asked what lay behind his team’s defensive improvement, Klopp said: ‘It is developmental. You have to develop, of course. We were 1-0 up and then we defended in a different space. We had to do it.

‘Last year our big strength was high pressing and then when there were moments when they (the opposition) didn’t want to play football. It was like “sorry” we have to do it differently. It’s like a dog. If you don’t give him his favourite toy and you throw something else, he thinks, “No, I don’t want that, I want the other one, I want to play high press”. So that’s how you develop, step by step, doing different things.

‘I saw at least five or six situations where we had the ball in the right space. We just had to pass one ball, the run was already there. But the last ball hit the leg of another player or something.

‘And that hurts because you’re going in one direction, then they win the ball and you have to go in the other direction. So for us it’s not cool and for them it’s a boost. That’s how a game like this develops. But I’m fine with the result.’ 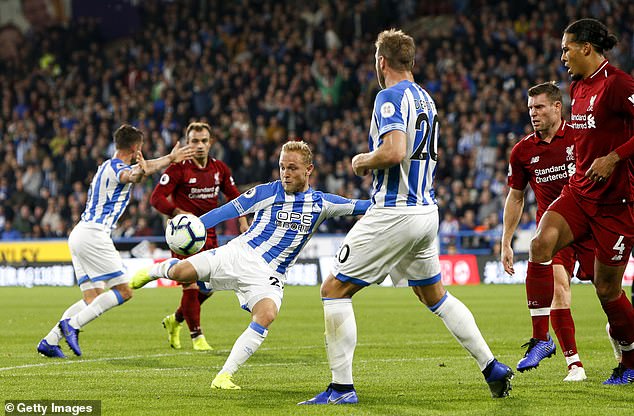 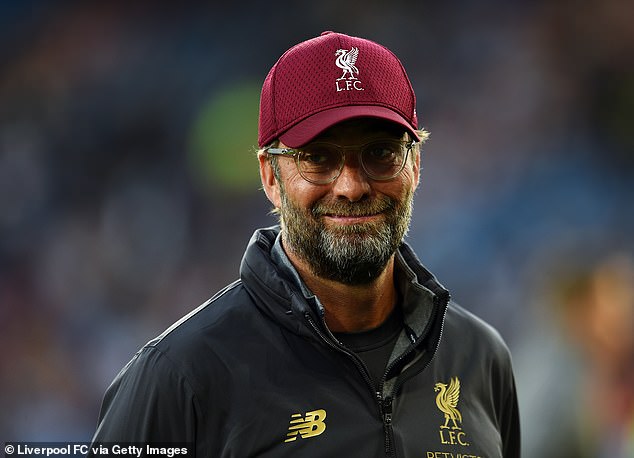 On some of the thrilling games of last season, Klopp said: ‘You cannot play always like that’

It was a reasonable summation by Klopp, who changed his team a little for this game with players such as Xherdan Shaqiri taking the opportunity well. The midfielder played in Mo Salah superbly for the goal after receiving an equally decisive and crisp pass from full back Joe Gomez.

Elsewhere the combinations between Salah and Daniel Sturridge didn’t always come off and this was one of the reasons why Huddersfield remained in the game for so long.

Wagner’s team were far better than their recent publicity suggested they would be and were backed by the most consistently vocal crowd I have come across this season.

Huddersfield deserved a point but have not scored at home this season and must raise themselves to this level of performance when the less glamorous teams come to visit if they are to stay in the division.

They made Liverpool defend for long periods and Klopp’s team did it well. Goalkeeper Alisson still looks vulnerable when pressed with the ball at his feet and another calamity may be round the corner for the Brazilian.

But Liverpool look a better team out of possession this season, for sure. Asked about some of the thrilling games of last season, Klopp said: ‘You cannot play always like that. But from time to time it should be possible.’

That sounds about right.