From flying in an FA Cup final, to trying to find your wings again

Callum McManaman was all set to soar.

He had stolen the show for underdogs Wigan Athletic as they pulled off one of the great FA Cup final upsets, defeating a star-studded Manchester City 1-0 at Wembley in 2013. 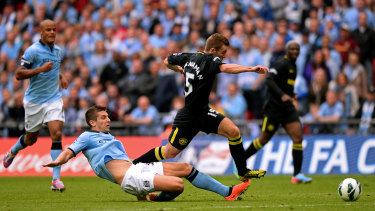 Callum McManaman in his Wigan days was man of the match in their massive FA Cup final win over Manchester City in 2013.Credit:Getty Images

Just turned 22, McManaman stood out so much that he was named man of the match.

His career trajectory should have been on an upward curve from that moment on: instead it nosedived through poor luck and the wrong moves as he looked to find the right environment in which to unlock once more that talent that had shone so brightly that day at Wembley Stadium.

Ask him about that incredible victory, and the memory lights up his eyes.

“That day was unbelievable. At that point I was flying – getting man of the match against City in the FA Cup final doesn’t get much bigger and I thought my career was going to keep going up from there, but it didn’t,” he said.

“No one gave us a chance against City. We were massive underdogs, but we deserved to win. It wasn’t a smash and grab, we were the better team on the day.

“That was brilliant, but then we got relegated on the Tuesday so we couldn’t really celebrate. I ended up moving to West Brom, and I didn’t play as much as I would have liked; it killed my confidence.”

Now he is here in Australia and playing for Melbourne Victory in the A-League as he tries to rehabilitate a career that promised so much but has largely been unfulfilled. 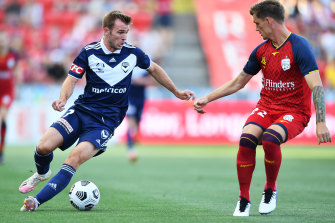 Callum McManaman (left) is feeling welcome at Melbourne Victory and aims to rekindle the spark.Credit:Getty Images

Helping to galvanise Victory’s season won’t rival the achievements of earlier in his career, but everything is relative.

McManaman turns 30 in April but feels that the talent is still there and that a form of redemption can be salvaged in a country and league that he would never have imagined being part of.

He made an impressive start, rolling back the years to score a brilliant solo goal in the first half of Victory’s opening game of the season against Brisbane but he picked up an injury in the subsequent match against Adelaide and has been absent ever since.

He is in the match-day squad for Sunday’s important clash with Newcastle, and hopes to rekindle the spark that once saw him dominate one of world soccer’s biggest occasions.

His story underscores just how brittle the self-belief of even the best players can be once things start to go awry – and how much they need support, even at the top of their game.

“It is fragile … it was tough mentally to get back and prove to everyone that I could,” McManaman said.

“It took time, it was a gradual thing, getting over it. I feel confident as ever, I feel hungry.

“Now I am starting to feel as though I am wanted and needed here at Victory.”

Meanwhile, the Socceroos will fly to Nepal to play their March World Cup qualifier, but the vast majority of the Asian qualifiers will now be played in June because of COVID-19 concerns.

The Socceroos’ game is one of only four qualifiers that will take place in March. On March 25 Saudi Arabia will host Yemen in Riyadh while Tajikistan and Mongolia will also play. Five days later, Mongolia will travel to Tokyo to take on Japan and Australia head to Nepal.

Australia have three remaining qualifiers – against Jordan, Kuwait and Chinese Taipei – and want to play them in a quarantined hub in this country in June. FA is negotiating with the Asian Football Confederation.