Fabinho says finishing in the Premier League’s top four would count as a successful season for Liverpool, given their perilous position two months ago.

Last season’s champions can close the gap on fourth-place Chelsea to a single point with victory at already-relegated West Brom on Sunday, live on Sky Sports.

The top four looked out of reach when the Reds lost 1-0 at home to Fulham in March, their sixth successive Premier League defeat at Anfield.

But since then they have gone seven league games unbeaten and reignited their Champions League qualification hopes with a 4-2 win at Manchester United in midweek.

When asked if finishing in the top four would make it a successful season, Fabinho told Sky Sports: “If you asked me at the beginning of the season, I would say no.

“At the beginning we are always optimistic, I would talk about winning trophies.

“Right now, I would say yes because the season has been a little bit strange. After the injuries, the bad moments we’ve had, being in the top four would mean a success.”

Liverpool can clinch a top-four finish with victory in their three remaining games, while also overhauling Leicester’s goal difference advantage of one.

After Sunday’s trip to the Hawthorns, they visit Burnley on Wednesday before bringing the curtain down on their season at home to Crystal Palace on May 23.

“Now is the decisive part of the season,” said Fabinho. “We have three finals to play, to win.

“We have to try and play our best football but in finals you have to win. If we don’t play our best but can get the three points, I will take it because that is what we need in this moment.”

Liverpool manager Jurgen Klopp is looking forward to an “exciting” end to the Premier League season and says he is used to chasing teams as the top-four battle heats up.

After 35 games last term, Liverpool were already champions and 21 points clear of Manchester City in second, but Klopp insists he is usually the one playing catch-up.

“Most of the time I’ve been in a chasing role so if I’m enjoying it, I don’t know. Sometimes yes, but I’m used to it,” he said.

“It hasn’t happened a lot to me that the teams I’ve coached were running away or whatever, so it’s a normal situation. It’s a good situation.

“Usually, when I’m involved, seasons go to the wire. I can’t remember many seasons when we didn’t play for anything in the last few games. It’s like this again and it’s all good. It’s exciting.

“Last night was very much needed, but it gave us a good feeling as well. After a long season, playing Thursday, Sunday, Wednesday, Sunday is a tough one, but let’s give it a try.” 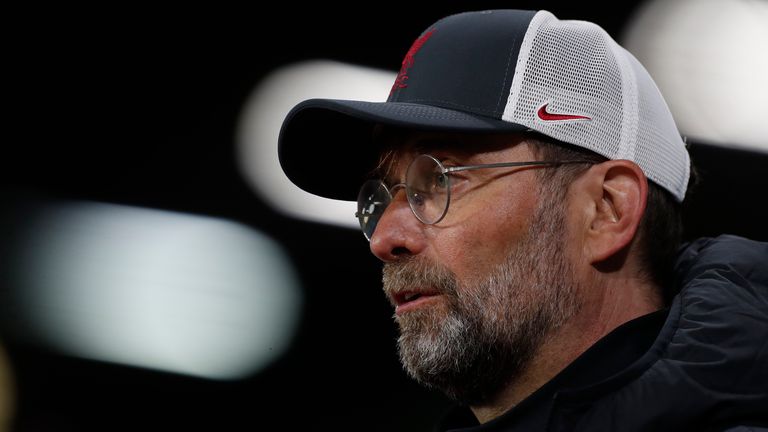 ‘We must prove we deserve Champions League place’

Klopp insists his side have to prove they deserve Champions League football next season after Thursday’s win over Manchester United, coupled with Chelsea’s defeat to Arsenal, put a place in the top four in their own hands – an unlikely prospect a fortnight ago.

Klopp said the example of Juventus, Serie A’s Champions League regulars who look like they may miss out, showed no-one should think they are entitled to a place in Europe’s elite club competition based on their reputation.

“I don’t think they give us a wildcard because of that,” said the Reds boss, whose side won a sixth European Cup in 2019.

“Some other good teams are not in yet as well – imagine a Champions League without Juventus. You have to deserve it and then you are part of it.”

Liverpool will go into Sunday’s trip to relegated West Brom with inexperienced duo Nat Phillips and Rhys Williams at the heart of their defence for a third successive match.

Klopp is delighted the one positive to come out of his side’s injury crisis has been the formation of two “proper careers” for the back-up defenders.

Injury to Ozan Kabak, loaned from Schalke in January as cover for the injured trio of Virgil van Dijk, Joe Gomez and Joel Matip, has seen the two academy graduates pair up in central defence for the last two victories over Southampton and the Red Devils.

Last season, Williams, who turned 20 in February, was on loan at Kidderminster but he made his first-team debut in the Champions League group stage – a competition Phillips was not initially eligible for having been left off the squad list as he was expected to join another club.

Klopp believes both have shown they can cut it at a high level.

“The boys did incredibly well: Nat for weeks already, Rhys mainly at the start in the Champions League as Nat was on the list,” Klopp said.

“Now they played together and I loved what they did (at United). This year created two proper careers, which is nice.

“When you are at an academy, that is not written in stone but they could show how good they are.”