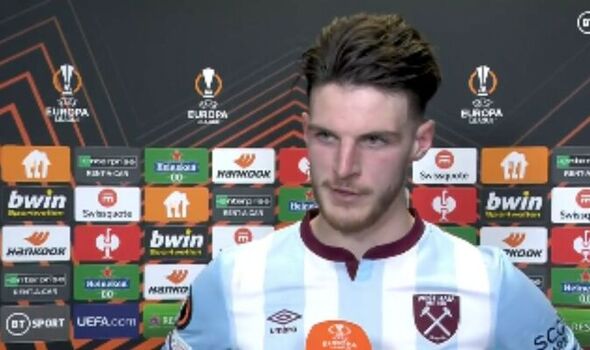 West Ham’s skipper in Germany Declan Rice believes the referee was against his side in the heat of their 1-0 Europa League semi-final defeat to Eintracht Frankfurt. The Hammers suffered heartache in the last four as the Bundesliga side set up a final showdown with Rangers in Seville later this month.

West Ham trailed Eintracht 2-1 heading into the second leg but their task got even harder when Aaron Cresswell was shown a straight red for a last-man foul following a VAR check.

Frankfurt frontman Rafael Santos Borre then struck the opener for the hosts, as the Irons ran their socks off to try and get back into the game.

It simply wasn’t to be though as West Ham suffered an agonising defeat and after the game, Rice made it clear he felt the officials were against his team.

He told BT Sport: “I think it’s an overlook of the whole game and the decisions that were made to be honest with you.

“The sending off was probably a sending off looking back at it but some of the decisions were poor tonight.

“Nothing seemed to go for us and the ref seemed to make every decision go for them.

“In the end when you’ve got someone who is against you, you can’t really do much.”

It’s been an incredible run for the Hammers, who beat both Sevilla and Lyon on their way to the semi-finals and Rice believes there is plenty to be proud of.

“We had a genuine belief around the camp, around the fans and even players from other teams text us saying go out there and do it. People really wanted us to do it.

“Now they’re celebrating and I have to listen to that. I’m strong enough to take it, I’m young but I want more, the lads want more and this club deserves more.

David Moyes was also handed his marching orders following a heated touchline incident that saw him kick a ball in frustration.

The Hammers boss has since apologised for his antics, saying: “I have to apologise for kicking the ball but the ball boy left it short and it was nicely on the volley for me.”