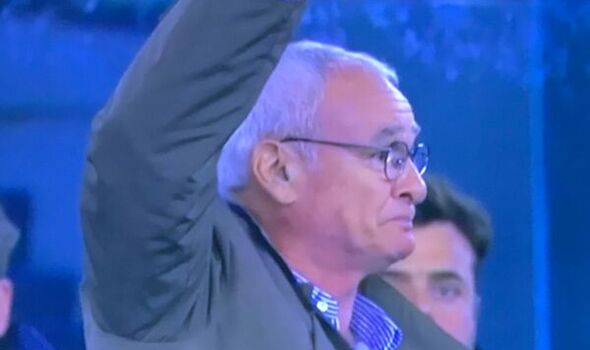 Iconic Italian football manager Claudio Ranieri looked visibly emotional as AS Roma and Leicester City fans gave him a standing ovation during their Europa Conference League semi-final second leg on Thursday. The 70-year-old was in the stands as a spectator at the Stadio Olimpico to see two of his former teams in action.

Ranieri enjoyed two spells at Roma between 2009-2011 and in 2019, and is a native of the city. At Leicester, meanwhile, he achieved the impossible by winning the Premier League with the Foxes in 2016.

He is clearly a hugely popular figure with both groups of supporters, and at one stage during the game between the two he was shown watching the action on a big screen. It led to an a raptuous reception from the whole stadium, and he reciprocated it by standing up and gesturing in thanks.

After drawing 2-2 in the first leg at the King Power Stadium last week, Roma took the lead both on the night and on aggregate with an early strike from former Chelsea striker Tammy Abraham.

Speaking ahead of the game Ranieri admitted he would be supporting Roma, telling Gazetta dello Sport: “My relationship with Leicester was purely professional. I’m a Roma fan, and that reconnects me to my childhood. I can’t betray my childhood colours.

“I think overall Roma have 55% chances of going through because this time around they’re playing at the Olimpico. It’s great to see a full stadium. I want to congratulate the club on its policy regarding ticket prices.

“If you have Mourinho sitting on your bench, you’re in good hands. José said it best last time around, ‘The fans must use their hearts, whereas we must use our heads.’ He’s right. Leicester have struggled and have been less effective when playing away from home.”

He did, however, praise Leicester boss Brendan Rodgers, adding: “However, Brendan Rodgers has brought organisation to Leicester, they always attack the space to make the most of Jamie Vardy’s characteristics. Beware of James Maddison, a quality player.

“Roma looked in control of the match in the first leg. Sometimes they had to sit back, but their counter-attacks were always efficient, and they could have won.”