It has taken Maurizio Sarri just three months to earn a small place in Chelsea’s record books after his side recorded a 10th unbeaten game to start a Premier League season – a feat none of his illustrious predecessors at Stamford Bridge is able to match.

While the Italian will be keen to deflect the personal praise to come his way as a result of such an impressive start, he will be no doubt delighted at the way his side maintained the pressure on Liverpool with a seventh league win to climb to second and in doing so cut the leaders’ advantage at the top to two points.

After shipping five last week against Manchester City, Burnley were again swept aside with contemptuous ease by one of the top flight’s big beasts, to leave them with just one win in their last 26 meetings with the division’s established top six – ironically an opening day victory at Stamford Bridge last August.

The hugely impressive Willian, Ross Barkley and Ruben Loftus-Cheek added second-half goals to a fourth of the campaign before the break from Alvaro Morata to put a more realistic tint on the final scoreline, leaving the hosts a perilous three points above the drop zone after suffering their heaviest home defeat under Sean Dyche. 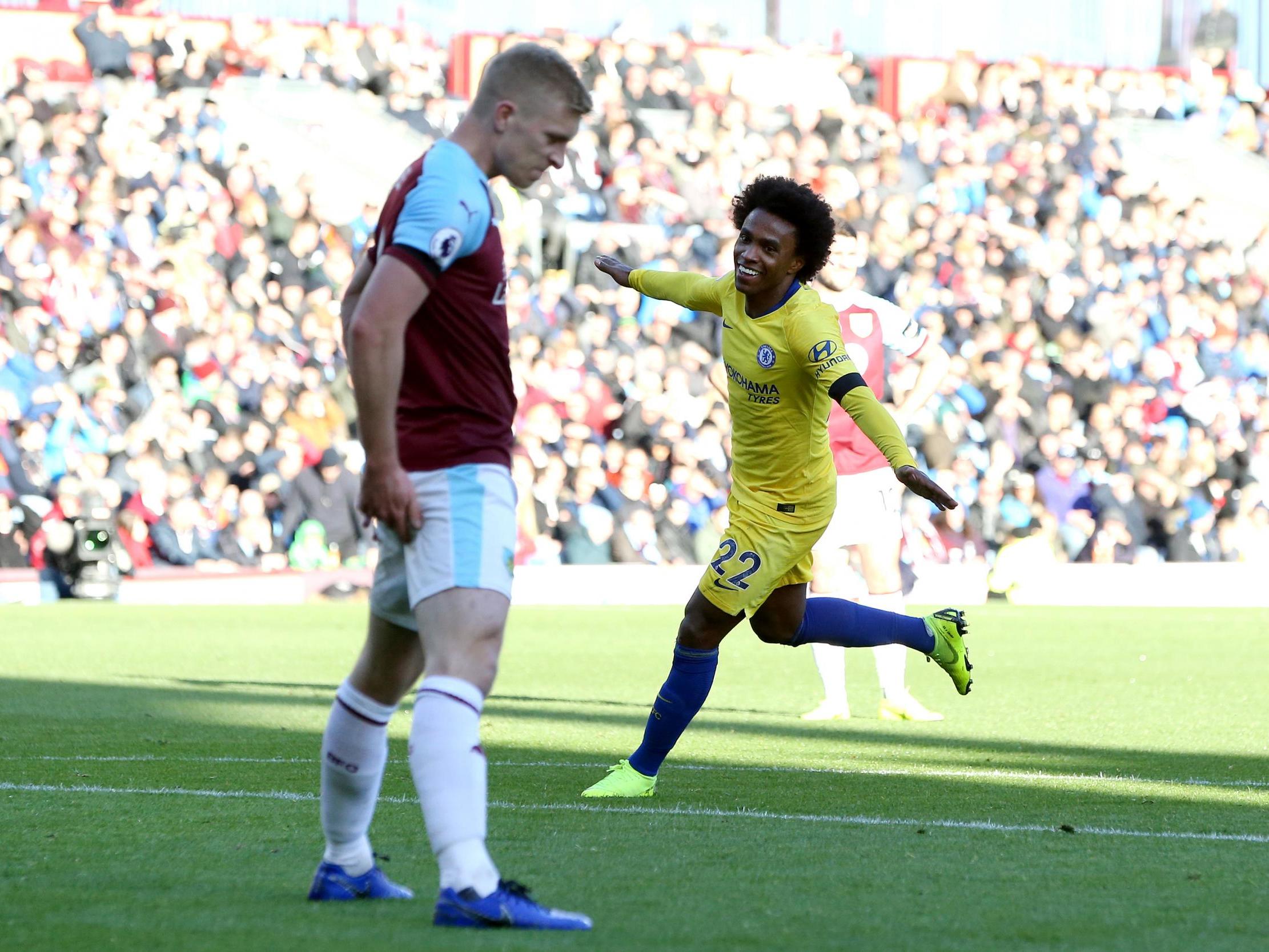 Chelsea made light of the absence of leading scorer Eden Hazard, who was ruled out for a second straight game by a back injury sustained in the draw with Manchester United, an injury that is likely to also keep the Belgian midfielder from facing Derby County in the Carabao Cup in midweek.

There was also further frustration for Loftus-Cheek, whose Europa League hat-trick was not enough to secure the England midfielder a starting role, though who nevertheless played a full part in the victory, earning an hour-long run-out at Turf Moor as a first-half substitute for the injured Pedro, and added the fourth goal from close range in stoppage time.

Dyche’s side enjoyed their best period immediately from the first whistle, and had Sam Vokes managed to touch home a fierce early cross shot from the returning Robbie Brady, the outcome might have been different. However, once Morata broke the deadlock in the 22nd minute with an unflustered finish past Hart from Barkley’s precise through-ball, the result never remotely looked in doubt. 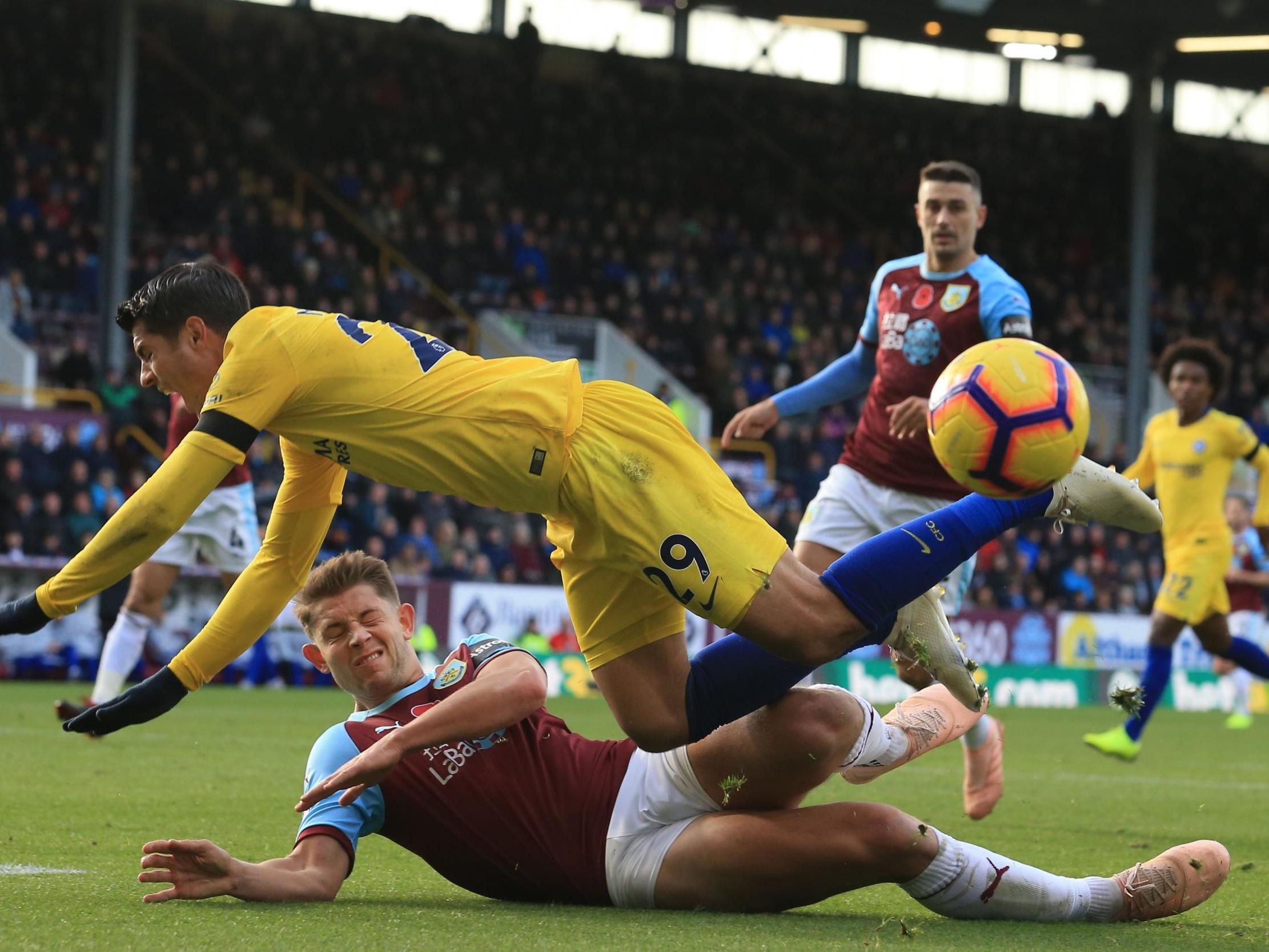 Indeed, without several interventions by Hart, Burnley could have been left embarrassed, as the former England international excelled with a fine early save from Morata’s deft glancing header, while also denying the Chelsea forward from close range with a brave block when a sumptuous pass from Jorginho unlocked the Burnley defence. When Sarri’s side found a way past the former England goalkeeper, the woodwork came to their rescue as a low curled effort from Willian struck the upright.

Morata headed badly over when meeting Willian’s cross at the near post, but any fears Chelsea had that their wastefulness would prove costly were eased thanks to two further goals in the space of five minutes early in the second half. Shortly before the hour, Barkley surged forward from Kante’s pass to find the bottom corner past Hart from 20 yards.

That soon became three when Willian was rewarded for his efforts, leaving two defenders trailing as he cut in from the left to find the same bottom corner as Barkley, right-footed from the edge of the area. Substitute Olivier Giroud should have claimed a fourth but shot across the face of goal, but it mattered little as Burnley’s fate had long-since been sealed, perhaps the only downside for the visitors arriving with first-half cautions for Morata and Willian for simulation, referee Craig Pawson correct on both occasions.