Charlton Athletic vs Sunderland, LIVE: Follow all the action from the League One play-off final at Wembley

The Football League play-off weekend continues with the League One final on Sunday as Charlton Athletic take on Sunderland at Wembley battling for a Championship return.

The Addicks just missed out on a return to the second tier after finishing third in the table but face a tough test against the North East outfit who are looking to bounce back from relegation at the first attempt.

Neutrals will hope for a repeat of the teams’ classic play-off final from 1998 which featured eight goals. Follow Sportsmail’s coverage of the 3pm kick-off here.

Charlton are out on the Wembley turf for their warm up. Just over 40 minutes to go until kick-off.

…and here come the Sunderland boys as well.

? Let’s get warmed up… #cafc pic.twitter.com/1QMW0hgLgd

London has been turned red and white all weekend by both Sunderland and Charlton Athletic fans.

Thousands are filing into Wembley Stadium right now, waiting to see who’ll be moving up to the Championship next season.

Will it be Sunderland at the first time of asking? Or will Charlton make it back after a few years away? 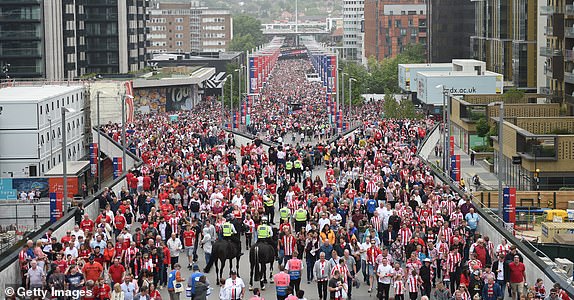 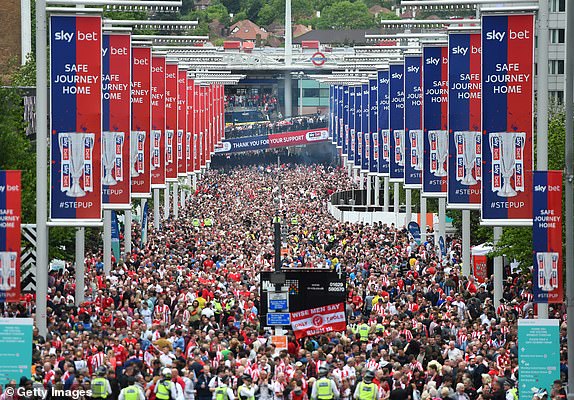 With the Monaco Grand Prix about to start, fans at Wembley will be hoping for similarly fast-paced action with plenty of twists and turns.

Back in 1998, Charlton and Sunderland met in the old First Division play-off final, and it was one for the history books. An incredible match saw the two teams finish 4-4 after extra time, and the penalty shootout went to sudden death before Charlton came out on top.

The League One play-off final between Sunderland and Charlton Athletic is only an hour away from the 3pm kick-off.

The team sheets are in!

TEAM NEWS ? Here's how the Addicks line up at Wembley this afternoon ? #cafc pic.twitter.com/NTjopV0H4X

Today's team news is in, in association with @aphrodite1994…

Unchanged from our second leg at Portsmouth, with @MaxStryjek and Aiden McGeady named on the bench. #NotDoneYet #SAFC pic.twitter.com/d9CJ0FArSd