‘It’s something that no coach, manager or player in that workplace should have to go through’: Brendan Rodgers jumps to defence of under-fire Hibernian manager Neil Lennon

He had barely steadied himself on his feet on the Tynecastle touchline when it began. A predictably depressing dirge of hollow arguments and whataboutery purely aimed at clouding the issue.

From ex-players to shock-jocks and from keyboard warriors to former police officers, the formula was all too familiar. A quick leap on to the moral high ground to condemn a criminal action, the inevitable ‘but’ and then the five words that briefly make you lose all hope. He brings it on himself.

Neil Lennon heard the same feeble response when he was sent bullets in the post, was assaulted in the street and when someone tried to run him and his daughter off the road. He could have set his watch by the same garbage being floated by many who should know better after being struck by a coin on Wednesday. 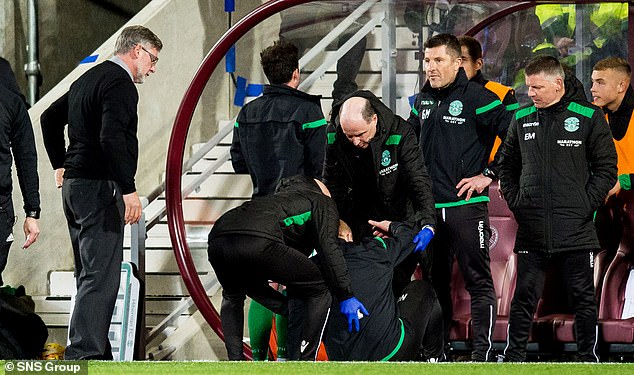 To all decent-minded people, the very fact there is a debate to be had seems fundamentally absurd. When someone is assaulted at their place of work, there is no discussion to be had or justification that can possibly be made. And yet still it’s trundled out.

‘It shouldn’t even be a question,’ insisted Celtic manager Brendan Rodgers. ‘You get some coaches who’ll participate with the crowd when there’s banter coming from the stands and it goes back and forth. Okay. But you should never be hit with a coin when you are out there at your place of work.

‘It’s something that no coach, manager or player in that workplace should have to go through.

‘From Neil’s perspective, I’m sure it shocked him.’ Just as Scottish football was beginning to admire itself in the mirror again, sporadic outbreaks of hooliganism have appeared like a wart on the chin.

The end of September saw the assistant referee at Livingston’s game with Rangers struck by a coin. The same fate befell his colleague at Tynecastle on Wednesday. In the same game, Hearts goalkeeper Zdenek Zlamal was punched by a Hibernian supporter before Lennon was felled for having the temerity to give a little bit back to his tormentors after a late goal had been chalked off.

For those engrossed in potentially the most engaging season for a generation, the fear is of a growing pattern of violence hijacking the agenda.

‘The young guy at Livingston that day, he smiled and got on with it,’ added Rodgers (below). ‘But it doesn’t make it right.

‘It’s not the perception that we want to have up here of the game where you are switching on and that’s what you are seeing. It’s not good when there is so much good going on right now.

‘The passion up here is so huge for football but there always has to be a lid kept on it. You look at these grounds and it’s very intense and hostile. The bigger picture is we don’t want that (coin throwing) as a representation of the Scottish Premiership and society up here.

‘The one safe environment you should have as a player or manager is on the field. It’s your job.’ 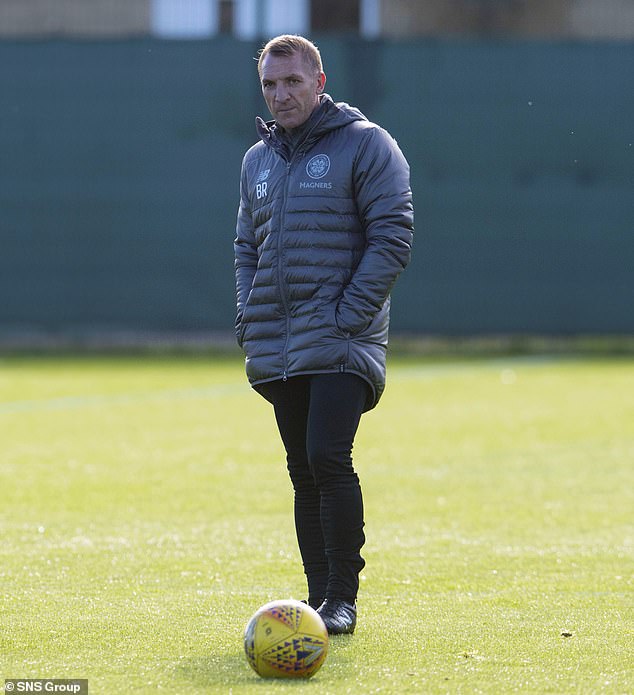 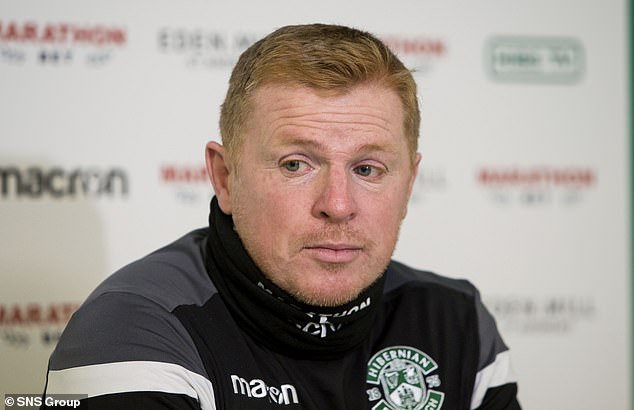 A narrow escape from one flying pie aside, Rodgers hasn’t quite found himself in the firing line in quite the same way the Hibernian manager has. His fervent hope is that a cluster of recent incidents is just that. An unfortunate spike in the graph which doesn’t point towards a growing trend.

‘I’ve never really had it but it doesn’t matter as we’re all different as managers,’ he said. ‘We’ve different traits and personalities. But no matter what the personality is or who it is, you still have to be able to work in a safe environment.’ Some 65 miles from the mayhem in Gorgie, Celtic’s scintillating victory over Dundee went slightly under the radar. For those in attendance, though, this was confirmation, if any were needed, that Rodgers’ side are truly back in business.

Since losing in the league at Kilmarnock on September 23, Celtic have won six domestic games across all competitions, keeping clean sheets in five of them. Hearts will not relish their visit to Glasgow’s East End on Saturday.

Scott Brown’s absence has still been felt but has opened the doors to others. Callum McGregor’s recasting in a holding midfield role in midweek left his manager struggling for superlatives.

‘How many positions does he play?’ asked Rodgers. ‘He’s just got the inbuilt brain for football.

‘I said to him that if Tom Brady got injured in the NFL, I’d probably get a call for him to go and play quarter-back.

‘His view of the game is up there with the very best. He knows the game tactically. He’s played in that role and been outstanding.’ If McGregor’s sparkling contribution, even in an unfamiliar position, surprised few, the sight of Ryan Christie scoring in successive matches in a Celtic jersey was one many doubted they would witness.

Having spent 18 months on loan at Aberdeen over two spells, the odds on the forward making the required impact at his parent club seemed lengthy. Suddenly, those who longed for an answer to the departed Stuart Armstrong are recognising that it may have been right under their noses all along.

‘He is a different player and we have played him in a different position,’ said Rodgers. ‘But he is one who gives us that penetration when we haven’t got the ball.

‘You look at the balance of our midfield the other night. A passer like McGregor, who is as good a passer as you could wish to see.

‘Then you’ve got Tom Rogic who finds space, knows where to find the ball. The balance for that is the runner. Ryan gives us that.’