Mesut Ozil may have left Arsenal earlier this year, but the club is yet to completely free themselves from him. Ozil signed a three-and-a-half-year deal with Fenerbahce after joining the Turkish side on a free transfer in January to finally end a long-running saga with the Gunners.

The German playmaker had long been a thorn in Arsenal’s side, with the club committed to paying his huge wages, despite manager Mikel Arteta freezing him out of the first-team setup.

Ozil, who joined Arsenal from Real Madrid for a club-record fee of £42.5million, signed a three-and-half-year contract extension worth £350,000 per week in January 2018 following a period of fine form, but things rapidly deteriorated soon after.

The midfielder had a poor relationship with former Gunners boss Unai Emery and was pushed to the fringes of the team.

Things did not improve under interim manager Freddie Ljungberg and Emery’s successor Arteta and Ozil was left out of Arsenal’s Premier League and Europa League squads for the 2020/21 season, with the club desperate to move on their highest earner.

That eventuality did not come to pass last summer, but with Ozil entering the final six months of his contract, he was able to negotiate with a new club and move on a free transfer in January. 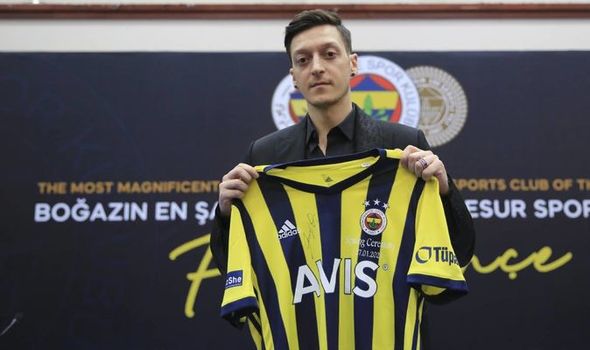 Fenerbahce agreed to take the 32-year-old in January and the move appeared to signal the end of a drawn-out and costly period for the North London side.

However, despite Ozil having been in Turkey for nearly three months, it appears Arsenal are not completely clear of the World Cup winner.

That is because, despite Ozil leaving on a free transfer, The Athletic reports that Arsenal agreed to pay 90 per cent of his £350,000-a-week salary until the end of June, when his bumper Gunners deal was to expire.

Ozil has made a slow start to his career with Fenerbahce, making just seven appearances in all competitions since his move in January.

Chelsea may be about to sign another Pedro, Drogba and Hazard

He has started just four times in the Super Lig and is yet to score or record an assist.

Ozil may still be draining his old club’s finances, but he remains a supporter of Arsenal. When he left at the start of the year he claimed he would remain a “Gunner for life” and it seems he is keeping that promise.

After Tottenham lost the Carabao Cup final to Manchester City 1-0 on Sunday evening, Ozil could not resist poking fun at Arsenal’s rivals, tweeting, “It remains dusty…#LeagueCupFinal.”