Arsenal's Gabriel Jesus is a huge upgrade on Alexandre Lacazette

Gabriel Jesus is the ‘gamechanger’ for Arsenal… the No 9 is a HUGE upgrade on Alexandre Lacazette, making more touches, passes and dribbles, he has matched the Frenchman’s goals last season after just seven games – and he even wins more tackles

Mikel Arteta’s ‘project’ at Arsenal has divided opinion, even induced ridicule, after some of his training methods and pre-match preparations were revealed in the recent Amazon Prime documentary.

Blasting You’ll Never Walk Alone across the training ground ahead of a trip to Liverpool and holding hands in the dressing room to feel the energy of team-mates became lightning rods for frustrated fans, disappointed that Arsenal had blown their chance of Champions League qualification, last season.

But the method in the madness is there for all to see now. 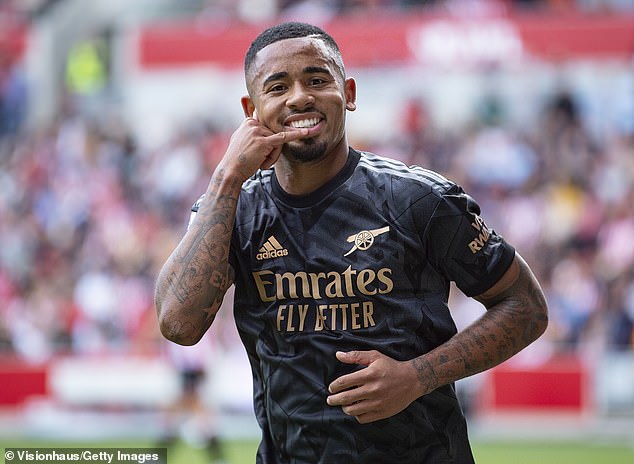 Arsenal were turned over at Brentford on the opening day of last season. In the weeks and months that followed they steadily became more disciplined and committed. The team toughened up, their resolve strengthened.

This season, with five new additions, Arteta has been able to build on that solid foundation and Arsenal have gone to the next level. No one is more important to them at this moment than Gabriel Jesus, who powered home a header to put the Gunners two-up, on their way to a 3-0 win at the Gtech Community Stadium on Sunday.

Still smarting from their humiliation at Brentford in the last campaign, the Gunners were determined to put the Bees back in their box this time around and they did so; emphatically.

The performance epitomised the progress made by Arteta as his team returned to the top of the Premier League table with six wins from seven.

And the new No 9, Jesus, has led from the front in every sense. 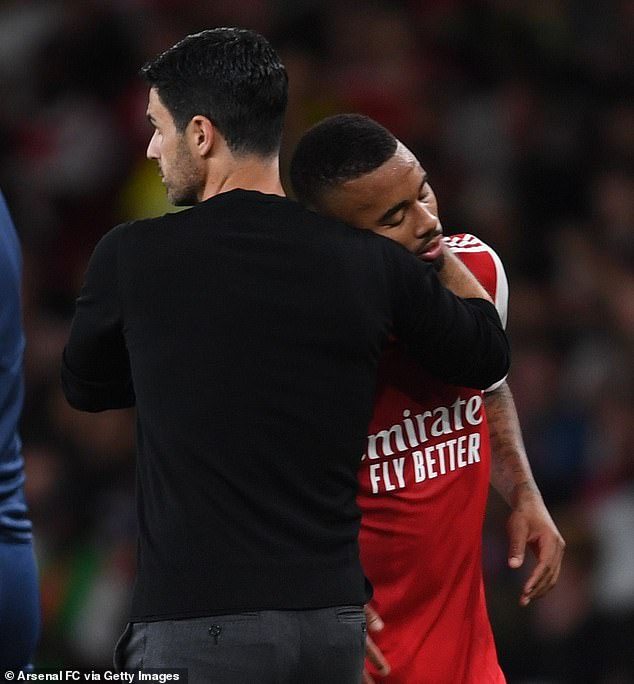 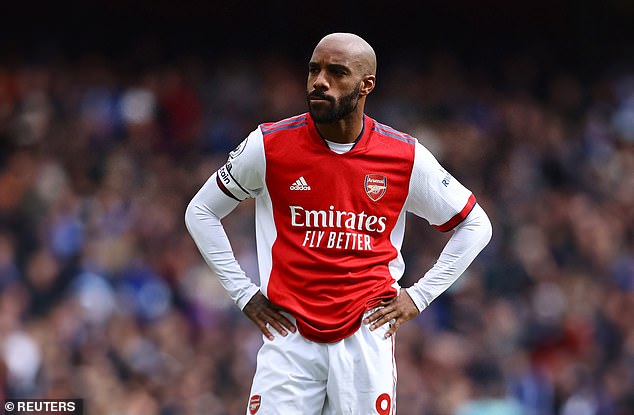 Jesus has proved a significant upgrade on former No 9, Alexandre Lacazette

‘Jesus is Arsenal’s real game-changer for me,’ Shearer told the BBC. ‘Jesus is already a huge part of what Arsenal are about now – it’s not just his goals and creativity that make him so important to them, it’s his relentless energy.’

Jesus, who signed from Manchester City in the summer, sets the tone. At Brentford, he could be found wresting for possession at left back as well as way up on the left wing, in the dying minutes of the game.

He will drop short and fight for the ball to bring others into play, or charge in behind forcing opposition defenders to drop off and create space for his talented team mates, like Martin Odegaard, Fabio Vieira and the rejuvenated Granit Xhaka.

The fact is, the Brazilian is huge upgrade on Alexandre Lacazette. At least, the Lacazette who played out the final year of his contract at the Emirates, last season.

If during that campaign, Arsenal developed a stronger jaw, to borrow a boxing metaphor, this season they have added a punch. Only Erling Haaland has been involved in more Premier League goals this term than Jesus. 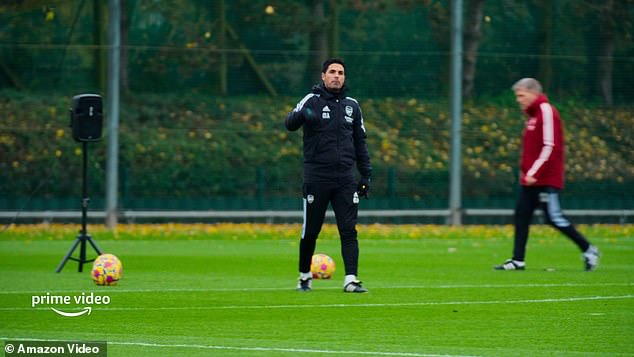 Arteta has stuck to his guns despite doubts over his ‘project’ at Arsenal, which has seen some creative work in match preparations, including playing ‘You’ll Never Walk Alone’ in training 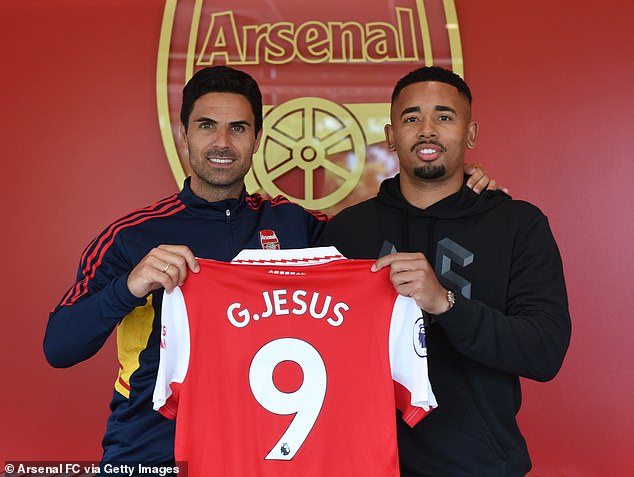 The striker has already matched Lacazette’s tally of four top-flight goals in the whole of the last campaign, and we are only seven games in. And Jesus is returning better numbers in almost every aspect of his play.

He has delivered roughly double the number of shots on target per 90 minutes, as well as goals and assists, so far this season. The Brazilian has 50 per cent more touches of the ball per game and he is much more prominent in the middle and attacking thirds as he looks to link the play.

He even makes more blocks and interceptions and wins more tackles than the Frenchman achieved last season. ‘Relentless’ is an apt description.

Despite his success, there is an admission from the man himself that he can do more after he was left out of the latest squad for the national side. 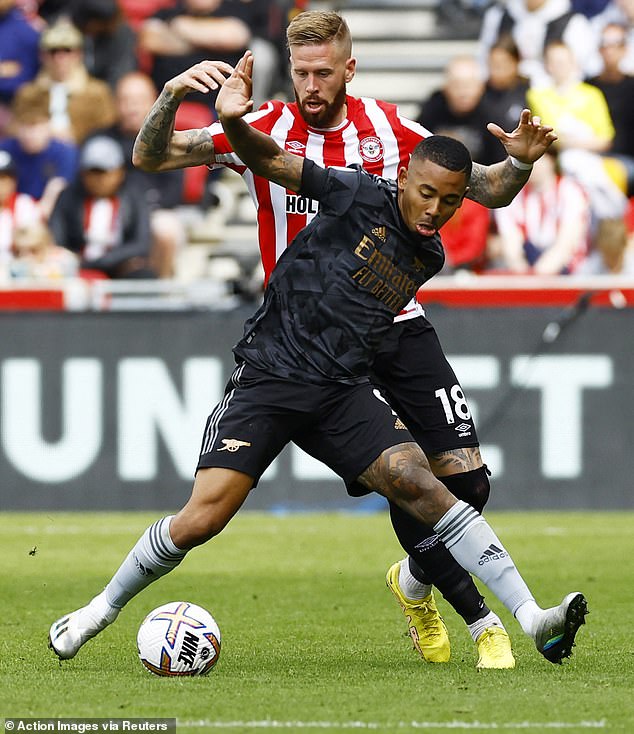 ‘There was (contact), after the call-up, yes,’ he told ESPN Brasil. ‘I respect the coach’s decision a lot, I respect Tite, the entire staff.

‘As I said, I’m Brazilian, I’ll always root for the team. And I also respect the other players, who have a lot of quality. I’ll keep doing my best to have the opportunity again.

‘What is in my control is my performance. I will always try to give my best, finish the plays. Today I had some chances that I could also improve a little more, I know. I’ve been training, trying to do my best.’

That kind of mentality has been serving him well and no doubt he will be impossible for Tite to overlook if this season’s form continues.

Of course, Jesus has been helped by playing in a successful team strengthened by the addition of Oleksandr Zinchenko from Manchester City, Vieira from Porto, William Saliba’s return from loan, as well as his himself. And Arsenal now enjoy more possession of the ball and the team is significantly more inclined to play forwards. 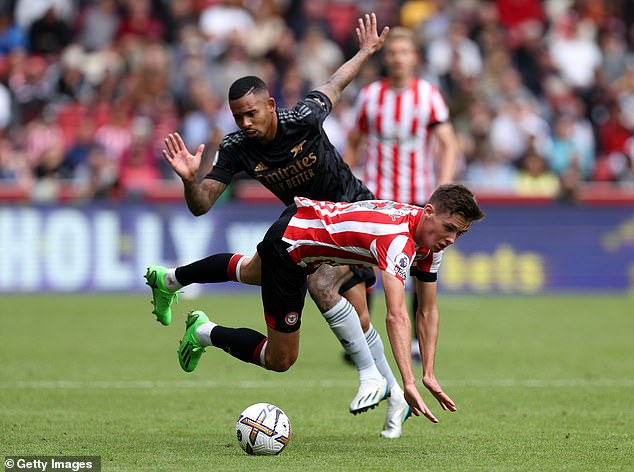 He has proved to be hugely competitive and strong, leading the line for Arsenal

‘Laca’ earned a fond farewell after five seasons at Arsenal, which brought 71 goals in 206 appearances. He was the club’s top scorer in two seasons and has a place in Arsenal’s top ten scorers in the Premier League. When he left he was warmly praised for his all-round contribution. There is no doubt he was a good servant of the club.

However, it is also true that Lacazette’s contribution fell away dramatically from what he gave Arsenal at his peak. In 2018-19, when he was named the club’s Player of the Year, his statistics, while below those achieved by Jesus now, were more comparable.

And to be fair, Jesus is currently ‘playing like a man possessed’, according to former Tottenham Hotspur striker Garth Crooks.

‘His enthusiasm and appetite for the game is immense,’ said Crooks, who included the Brazilian in his BBC Team of the Week.

‘He’s not just scoring goals for the Gunners but leading the line. His movement around the pitch is fantastic and he plays the game with an infectious arrogance that is spreading through the Arsenal team like wildfire, and the reason why they currently sit on top of the Premier League.’ 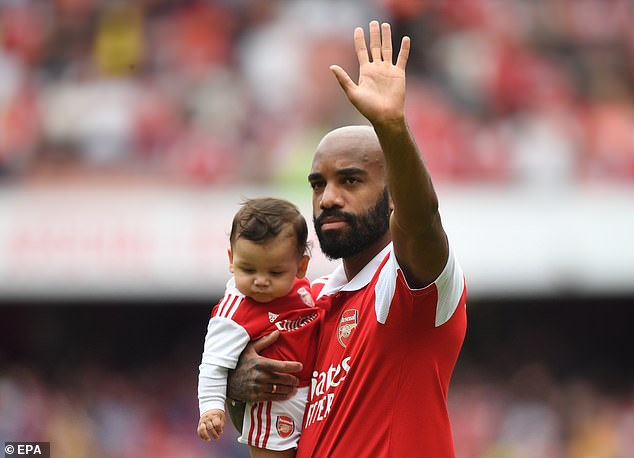 Arsenal have shown they mean business this season, but the Bees’ boss Thomas Frank’s assessment that they will be challenging for the Premier League title sounds a little premature.

The Gunners have failed their biggest test so far this season, losing 3-1 away at Manchester United, where they were caught out on the counter attack on the only occasion they have lost points.

Their next game, at home to Spurs on October 1, will be intriguing.

Former Aston Villa, Chelsea and Marseille striker Tony Cascarino says that Arteta finally has the team he has craved since taking on the Arsenal job almost three years ago, one capable of emulating his former club, Manchester City.

‘[They] won the ball back quickly, passed with pace and produced clinical finishing – just like City do,’ Cascarino told The Times.

‘The next test is winning big games like City do and it doesn’t get much bigger than the North London derby.’

The international break will give Arteta and his staff time to regroup. It will also allow Jesus to recharge after his explosive start to the season after being inexplicably left out of the Brazil squad. The striker will return full of energy and with a point to prove.