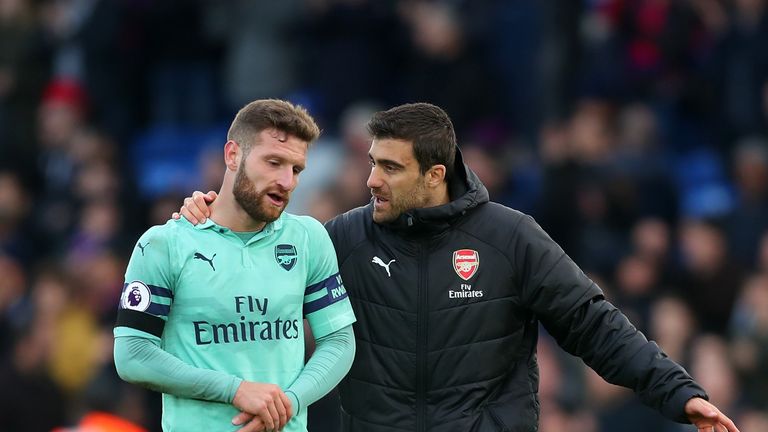 Are Arsenal’s defensive performances a cause for concern? We take a look at the statistics after their winning run ended with a 2-2 draw against Crystal Palace on Super Sunday.

Unai Emery’s side recovered from a goal down to lead 2-1 at Selhurst Park thanks to goals from Granit Xhaka and Pierre-Emerick Aubameyang, but Luka Milivojevic clinched a draw for the hosts when he converted his second penalty of the afternoon in the closing stages.

Arsenal are still in touch with the top of the Premier League and remain undefeated since August, but has their winning run masked defensive deficiencies?

Arsenal’s two goals conceded against Crystal Palace took their total for the Premier League season to 13 in nine games. It puts them level with Palace and Brighton and it is nearly twice as many as any of the other four sides occupying the Premier League’s top five positions.

The issues stem from an inability to prevent opposition chances. On Sunday at Selhurst Park, Palace managed 16 shots on goal over the course of the 90 minutes – their second-highest total in any Premier League game this season. 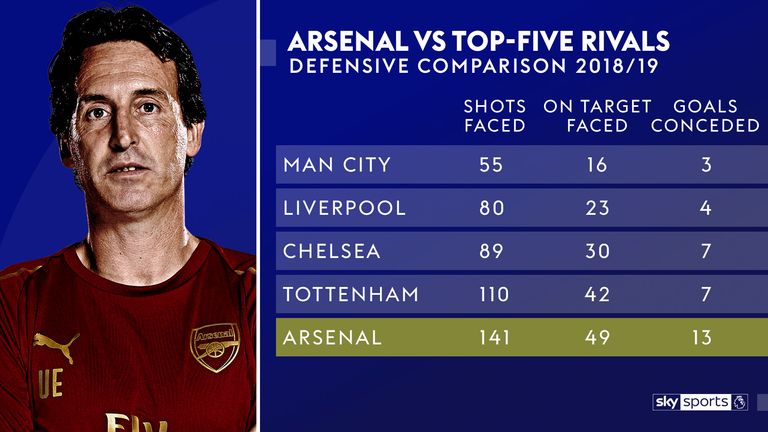 Indeed, the result could easily have been worse for Emery’s side, with Andros Townsend and Max Meyer among those to spurn presentable opportunities for the hosts.

For Arsenal, it continued a troubling trend. The stats show Emery’s side have faced 141 shots so far this season – considerably more than Manchester City, Liverpool, Chelsea or Tottenham – and more, even, than Cardiff (135), Huddersfield (134) and Southampton (131).

The number of chances Arsenal are giving up points to collective issues but individual mistakes are causing problems, too.

On Sunday, there were defensive errors in the lead-up to both Palace goals. First, Bernd Leno, preferred to Petr Cech in goal, failed to get any distance on his punch from a Palace corner, then Shkodran Mustafi lunged in on Cheikhou Kouyate to concede the penalty.

Xhaka was exposed for the equaliser. The Switzerland international, who was playing as a makeshift left-back, clumsily tackled Wilfried Zaha, who went to ground to win the penalty. The individual defensive lapses have been another unwanted theme of Arsenal’s season and the statistics prove it. According to Opta, the Gunners have made the joint-most errors leading to opposition shots in the division – level with relegation-threatened Fulham.

By contrast, Manchester City, Liverpool, Chelsea and Tottenham have only made two, three, three and five respectively. Arsenal’s errors proved costly against Palace and Emery will be aware of the need to eradicate the complacency during the tough run of fixtures that lies ahead.

Of course, Emery’s efforts to improve Arsenal defensively have not been helped by a string of injuries.

The Spaniard was forced to deploy Xhaka at left-back because of injuries to Nacho Monreal, Sead Kolasinac and youngster Ainsley Maitland-Niles – who has deputised in the position in the past – and he now faces a potential headache at right-back, too, with Hector Bellerin forced off at half-time against Palace due to a muscle problem.

It is not just in the full-back areas that Arsenal have had issues. Sokratis Papastathopoulos has had niggling injuries since his arrival in the summer, while fellow centre-back Laurent Koscielny has only recently returned to training following his ruptured Achilles. Emery will be hoping the influential Frenchman can get back up to speed quickly.