One flash of magic, early in the second half supplied the proof the Christian Eriksen was back and the ball was once again performing under his spell.

First, an intricate exchange of passes with Son Heung-min as Tottenham’s Danish prince wriggled out of a tight space and a change of pace before a cross whipped onto the head of Harry Kane at the back post.

On the bench, Mauricio Pochettino, will have savoured the moment. He needs his playmaker to be in the groove and full of confidence to give Spurs another dimension. 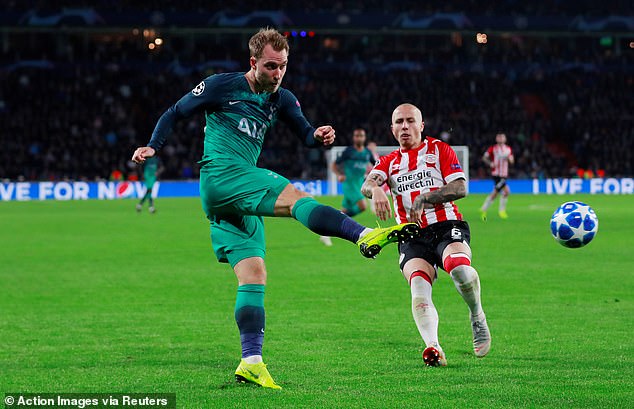 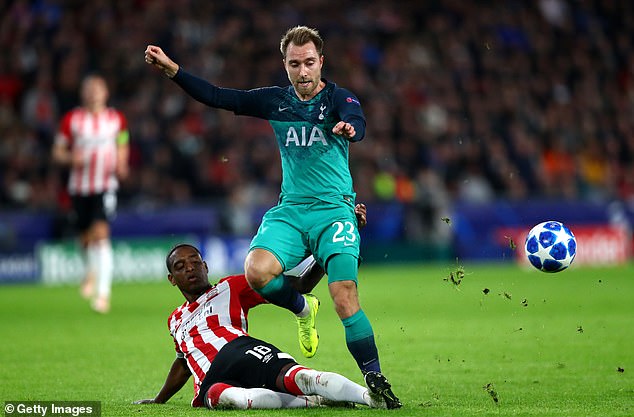 What Pochettino could have done without was Eriksen’s next key contribution; a blind pass which proved the trigger for PSV Eindhoven to launch a swift counter-attack to unzip their visitors.

Toby Alderweireld was lurking too deep, playing Hirving Lozano onside and Hugo Lloris charged from his goal and commit the reckless foul for which he was dismissed, leaving the Londoners to defend a one-goal lead with 10 men.

It proved beyond them. They conceded late, just as they did at Inter Milan and their Champions League prospects are bleak.

The fact that Eriksen was fit again, having started for the first time in a month, suddenly seemed to be scant consolation.

An abdominal strain forced him out and there were alarms when the Denmark manager Age Hareide claimed it was a ‘chronic’ problem.

Pochettino brushed this aside easily enough with the Dane back in the squad, on the bench at West Ham on Saturday and in the team in Eindhoven, operating as a classic number 10 behind Kane. 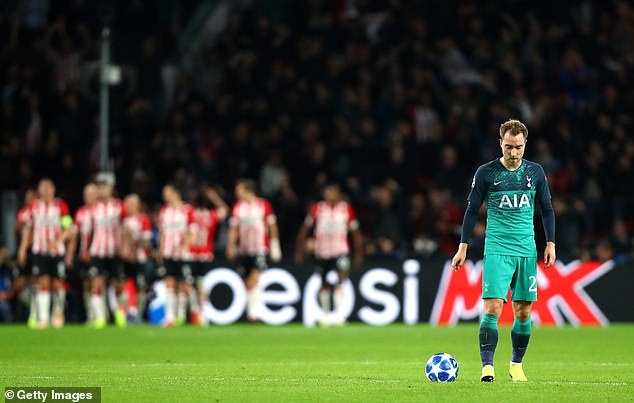 It was Eriksen who gave Tottenham’s campaign such a positive start with the opening goal at Inter, before another late collapse left them defeated at the San Siro and then beaten again by Barcelona at Wembley.

Things can unravel at remarkable speed in a group like this with three clubs of great pedigree, all former European champions.

PSV understood the threat of Eriksen, who joined Ajax at the age of 16 and won the Dutch title three times before his £12.5million move to the Premier League.

Inside the Philips Stadion, his name was greeted with the piercing whistles of derision reserved for those of an Ajax affinity when the teams were revealed and there was a robust challenge by centre-half Nick Viergever to welcome him back.

Like his Spurs team-mates, Eriksen was slow to find his rhythm. Unable to influence the game in the opening half hour, his passing lacked its normal precision but once they went behind the Londoners stirred.

Moving the ball at a quicker tempo they were able to generate more pockets of space, capitalised upon by Eriksen, Lucas Moura and Kieran Trippier around the fringes of the PSV penalty area, and this was the trio which produced the equaliser. 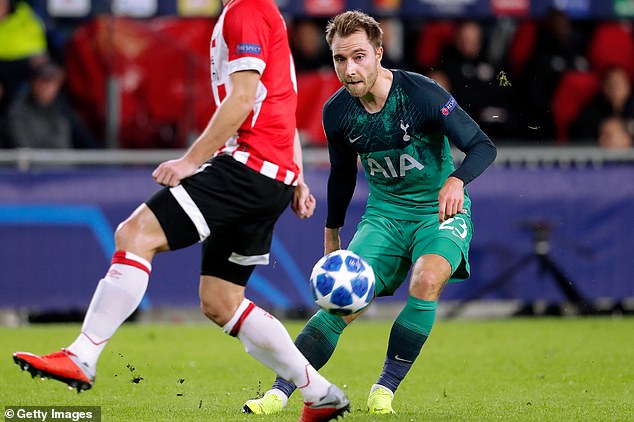 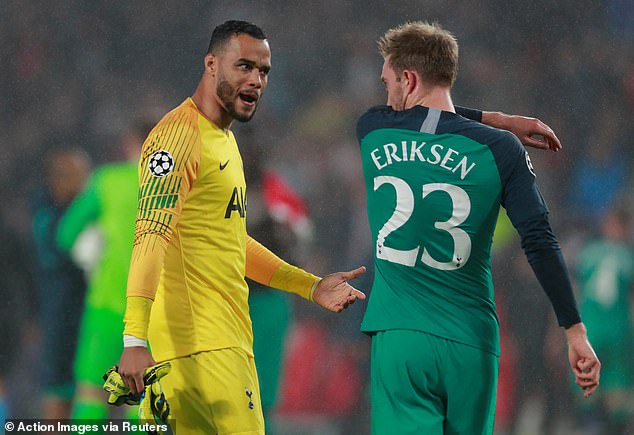 Eriksen delivered a beautiful pass to Trippier. For a fraction of a second it seemed to lack power when, in fact, it was perfectly weighted, inviting the full-back to accelerate and rap the ball square for Moura, who scored with the help of a deflection.

After the interval, the ball was back under his spell and the Dane was firmly back into his groove. His touch was sure and his decisions clear.

On a wavelength with Kane, he read a dummy, latched onto Trippier’s pass and tested goalkeeper Joroen Zoet with his left foot from the edge of the area.

Then came the flash of brilliance to create the second goal. Then came the Lloris red card and PSV’s fight back. Eriksen might be back and they are much better with him but Spurs are starting at the exit.