Wallabies No.8 Harry Wilson was a notable absentee from Saturday's captain's run due to illness ahead of Bledisloe II but Australian officials are confident he will be ready to line up at Eden Park for his second Test appearance.

Close-up photos appeared on the Wallabies' social media channels of players posing for the usual team photo at Eden Park. 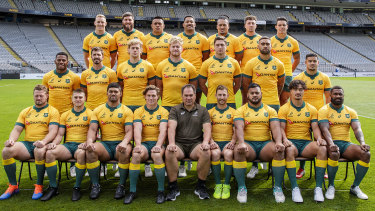 The Wallabies, without No.8 Harry Willson, pose for a photo at Eden Park ahead of Sunday’s second Bledisloe Test. Credit:Getty

However, a wide shot taken at the ground showed only 22 players in gold jerseys on the eve of a blockbuster clash at a venue Australia hasn't won at against the Kiwis since 1986.

Wilson, who had a stellar debut last week in Wellington, didn't train on Saturday and remained at the team hotel while others completed a light session.

A Wallabies spokesperson said Wilson didn't get a good night's sleep, with team management deciding it was best to let him rest and rehydrate.

It is believed Wilson is recovering from a stomach bug.

Wilson will be eager to run out at Eden Park in his preferred jersey of No.8, having switched to the back of the scrum from No.6.

Captain Michael Hooper said he wanted more of the same from Wilson after an excellent first-up performance on the international arena.

"He had a really good physical presence and some nice finesse in his carries down the edge there," Hooper said. "He was physical through the middle and his defence [was good]. More of the same from him."

If Wilson was a late scratching, the Wallabies could bring Pete Samu back into the No.8 spot after starting there in Sunday's 16-16 draw.

There are a number of other options too, which include bringing Samu to No.8 and starting someone like Liam Wright or Rob Simmons at No.6 in place of Ned Hanigan, who can play second row as well.

Meanwhile, the All Blacks have called in centre Peter Umaga-Jensen as cover for Rieko Ioane, who has reported hamstring tightness.

Ioane, 23, was dropped to the bench after bombing a certain try on the weekend and his inclusion in the side won't be confirmed until just before kick-off.

All Blacks captain Sam Cane was hopeful Ioane would get a chance to redeem himself after dropping the ball over the line and costing his side a try in the first half of the Bledisloe opener.

"Fingers crossed," Cane said. "Between him, the medical staff and Fozzy [coach Ian Foster], they'll do what's right by the team.

"No one in our circle is blaming Rieko by any means. He has carried on and prepared as well as he has every week and I'm sure he'll bounce back."