In a helter-skelter contest that recalled the famous Fijian upset in Nantes that bundled the Welsh out of the 2007 World Cup, the Pacific Islanders led 10-0 after nine minutes and again after a penalty try in the 54th minute. 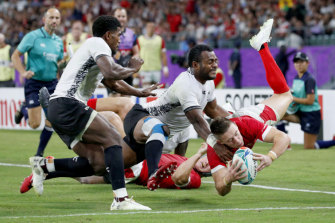 Adams' first two scores gave the Six Nations champions a 14-10 lead at half time and his third, a brilliant flying finish in the left corner, put them back in front before a 69th minute Liam Williams try ultimately sealed the bonus-point victory.

The Fijians, upset by Uruguay earlier in the tournament but inspired by standout winger Semi Radrada, kept running the ball until the final whistle but now bow out of World Cup in the pool stage for the third successive time.

Wales, who beat the Wallabies, will top the group if they beat Uruguay in their final pool match. Australia play Georgia in their last pool game on Friday.

The Pool D winner advances to a quarter-final against the Pool C runner-up, at this stage likely to be France.

The Pool D runner-up is projected to get a tougher match against England, who are favoured to win Pool C by beating France on Saturday.

Earlier on Wednesday, Russia ended their second World Cup tournament with a 61-0 loss to Scotland, which kept the Scots' hopes of advancing to the quarter-finals alive until their final match against Japan on Sunday.

Argentina posted a 47-19 win over the United States, but for the first time since 2003, the Pumas will be watching the quarter-finals from home after their earlier pool defeats to France and England.

"Today was very good in lots of areas," said Argentinian coach Mario Ledesma, "but ultimately how I feel about this World Cup is that I'm not satisfied."