Scotland bounced back from last weekend’s humiliation in Nice with a gritty 17-14 win over France at Murrayfield.

Gregor Townsend’s side were still disjointed at times and made some basic errors but they found a way to win – which will be a huge confidence boost ahead of next weekend’s trip to Tbilisi to take on a Georgian team who will be desperate to cause an upset.

Scotland lasted 14 seconds longer than they managed in last week’s 32-3 defeat before conceding a score.

On this occasion, Peter Horne was the culprit when he forced a pass under pressure towards Stuart Hogg, which was picked off by French wing Damian Penaud, who galloped home unchallenged.

5 – Finn Russell has assisted five tries for @Scotlandteam in 2019, no tier one player has assisted more in Test rugby this year. Spark. pic.twitter.com/Oyk4ZQKTqr

The match clock said one minute 50 seconds as the Clermont man dotted down under the posts. Thomas Ramos added the conversion.

It is three games in a row that Scotland have conceded a try inside two minutes of kick-off – Jack Nowell got England off to a flyer when the two sides met back in March – and it is a habit that they need to get out of soon.

Scotland recovered to narrow the gap through a Greig Laidlaw offside penalty, and they had a few more half chances during the next 20 minutes, although they struggled to click as an attacking force and were hesitant in defence. 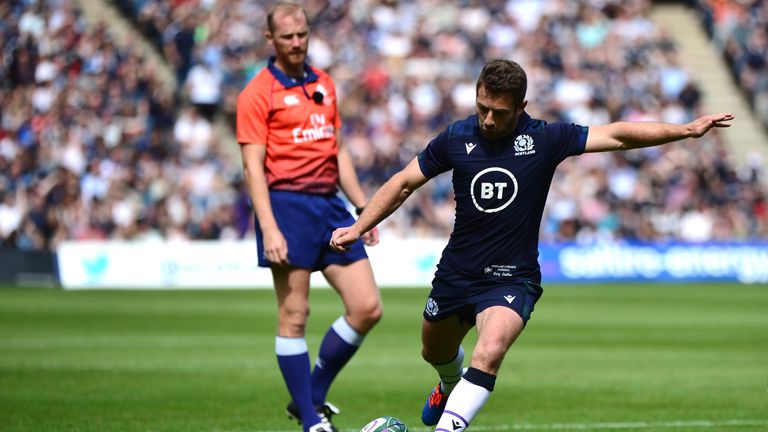 Winger Tommy Seymour had to come off because of a knock to the head and there was another major injury concern when Sam Skinner hobbled off midway through the second half with what looked like a knee injury.

France, on the other hand, looked far more comfortable on and off the ball, and they extended their lead on 26 minutes when Russell failed to gather a high ball.

From the turnover, Sofiane Guitoune swept outside Ryan Wilson before sending Penaud in for his second try of the afternoon.

Scotland struck back just before half-time when Ramos directed a hospital pass at Penaud on his own 22. Chris Harris made the hit, Kinghorn scooped up the loose ball, and Harris got straight back into the game to collect Kinghorn’s offload. 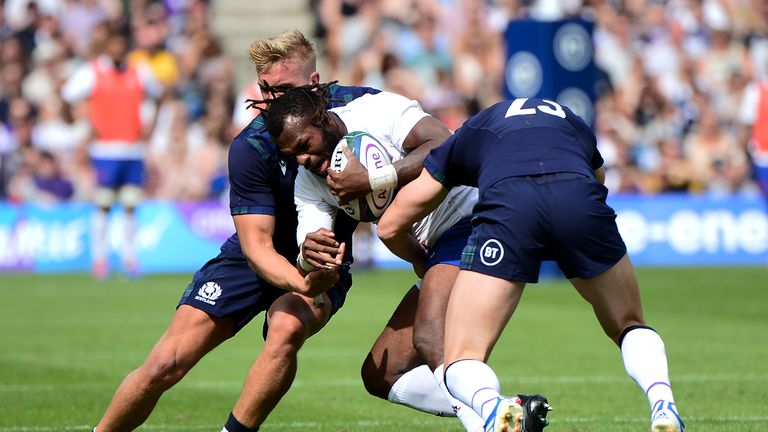 The centre was pulled down just short of the line, but Scotland recycled quickly. Pete Horne had a dart in midfield to suck in the French defence, then another quick recycle gave Russell the chance to send Sean Maitland in for a score in the corner with a trademark floated pass over Charles Ollivan’s head. Laidlaw struck the conversion.

Murrayfield came to life when Hogg sent a long kick up the right touchline and Kinghorn did well to close down the French as they tried to clear the danger. A few minutes later, Harris hit the line like a runaway train to score under the sticks.