Rugby World Cup: What does Typhoon Hagibis mean for England and Scotland? 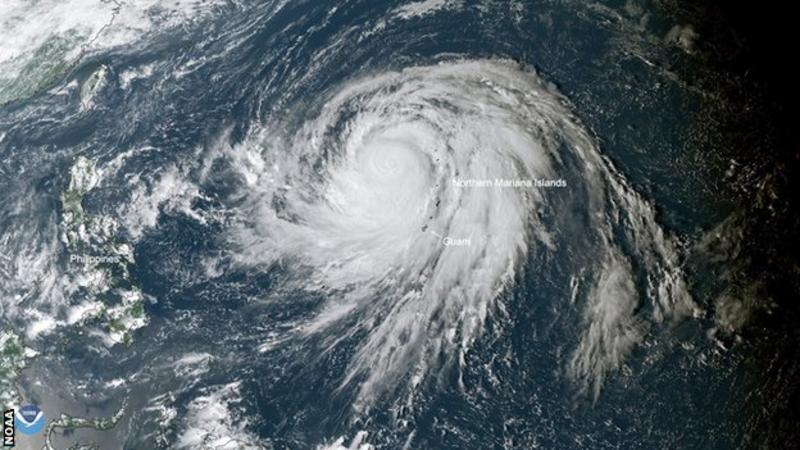 Hagibis is moving towards Japan and expected to make landfall on Saturday.

Both England’s game against France in Yokohama on Saturday (09:15 BST) and Scotland’s vital match with hosts Japan at the same venue on Sunday (11:45 BST) could be affected.

BBC weather presenter and meteorologist Simon King said it is “one of the most powerful tropical cyclones this year”.

World Rugby has called a news conference on Thursday at 04:00 BST to discuss what action will be taken.

What is the forecast?

A Met Office spokesperson said on Wednesday that Typhoon Hagibis was in the western North Pacific and on track to hit Japan this weekend.

It was located around 900 miles south of Tokyo with estimated wind speeds of around 120mph and gusts of 170mph.

King explained: “It is equivalent to a category five hurricane, making it one of the most powerful tropical cyclones around the world this year.

“The typhoon will start to weaken as it continues its track northward. However, forecasts from the Joint Typhoon Warning centre and the Japanese Meteorological Service suggest it will make landfall in southern Honshu, around the Tokyo area on Saturday lunchtime UK time.

“By this point, it’ll still be categorised as a ‘very strong typhoon’ with wind gusts in excess of 100mph and bring between 200-500mm of rain.

“This will be significant in a built-up area such as Tokyo with damage and flooding expected.”

Could it change before the weekend?

“Forecasting the path of a typhoon is a tricky one and while there is growing confidence of a landfall near to Tokyo, it still could shift path slightly, even up to 24 hours before time.

“However, Typhoon Hagibis is huge, covering a diameter of around 500 miles.

“On landfall, the most powerful winds are expected to extend out 60 miles from its centre. Therefore, even if the location of direct landfall changes, the winds, flooding rain and impacts will still be felt over a large area.”

What are the options?

Organisers could move games away from the area where Typhoon Hagibis is expected to make landfall. It had been suggested that England’s meeting with France, due to be played in Yokohama, could be shifted 600 miles away to Oita.

However, Oita is a far smaller venue, with space for 40,000 spectators compared to Yokohama’s capacity of 72,327, and that option is considered unlikely. Instead the matches could be played behind closed doors to limit the risk to spectators.

It has also been suggested Scotland’s match with Japan could delayed by 24 hours but, according to the tournament rules, it is not possible to postpone pool-stage matches to another day.

If both matches are cancelled, this would result in them declared a draw, with two points awarded to each team.

What does it mean for the World Cup?

England and France are vying for top spot in Pool C having both already qualified for the quarter-finals, but should their match be cancelled it would mean England will progress as winners.

Eddie Jones’ side would then face a probable quarter-final against Australia, who knocked them out at the pool stage of the last World Cup en route to the final, with Wales expected to top their group and therefore play France.

The consequences would be far worse for Scotland if their game against Japan is called off.

Gregor Townsend’s team need to win to go through and may also have to rely on bonus points but – if Ireland beat Samoa in Fukuoka on Saturday – a weather-enforced two-point haul would mean they finish third in Pool A and go out.

When will we find out?

World Rugby has announced a media conference to discuss the impacts of Typhoon Hagibis on the tournament for 04:00 BST on Thursday.