Join Sportsmail’s WILL GRIFFEE for all the live action, with regular updates from CHRIS FOY and LUKE AUGUSTUS from Twickenham Stadium.

England would be absolutely delighted to make it 3-3 at this stage. They’ve not been in the Springbok 22 once but Farrell has his first shot at goal.

Ominous for England. They are so aware of the Springboks’ forward threat and so fixated by the desperate scramble to stop it that they are succumbing to far too many disciplinary lapses. They need some control, but such is the obvious power deficit at this stage that it seems unlikely to be achieved – certainly while they’re down to 14 men.

17 mins: Hartley in at the side and South Africa have another line-out five metres away. This time it’s overthrown to give England some relief. Youngs clears well and that’s a massive passage of play for England to survive. They’ve got to slow the game down now to get Itoje back on with minimal damage. 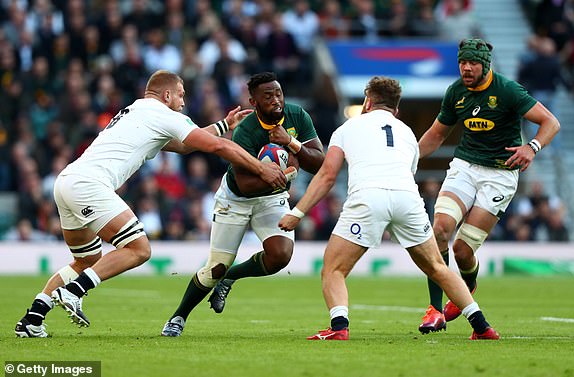 It looks for all the world like South Africa are going to score. Pollard hangs up a cross-kick, Daly is beaten in the air Nkosi but England hold him up short. The ball then comes out and Itoje makes the tackle but he kills it, doesn’t roll away and he’s been sent to the bin. South Africa with an attacking line out again.

Slow start by England, they’ve been sloppy in possession while South Africa have been the aggressors. 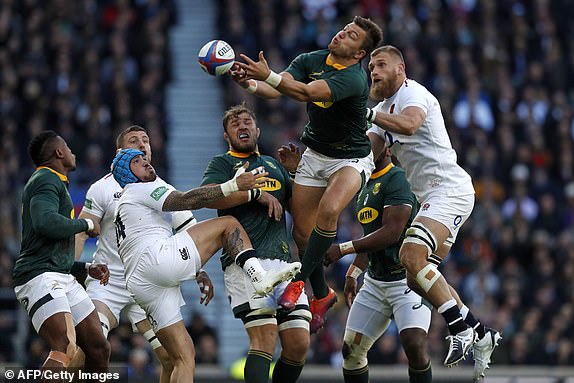 11 mins: South Africa claim a box kick over Elliot Daly and rumble forward. Eventually Nkosi is knocked into touch but at points England were stretched there. Marx is making his weight tell in the carry and it’s been an accomplished start from the Boks. Daly then belts one back into South Africa territory.

Not the ideal start for England here; scrum under immediate pressure, a strong early maul drive by the Springboks pack and two penalties conceded by the hosts already.

Pollard knocks over the penalty for the first points of the afternoon. A regulation strike from in front around 35 metres out.

4 mins: Henry Slade puts in a delightful grubber through and it looks for all the world like May is going to race onto it but the ball just bounces into touch at the last moment. Bright start from England, Ben Youngs heavily involved and Jones’ side are giving it plenty of width. 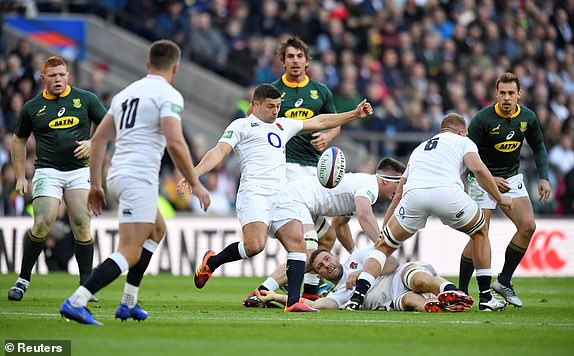 Owen Farrell was first to emerge from the tunnel, leading England out for this game. It will be interesting to see if he has more involvement in dialogue with the referee. Dylan Hartley, England’s other co-captain, is more likely to have those key conversations with Angus Gardner.

Lovely hanging kick-off from Pollard but the Springboks knock on and England have an early look at the scrum. They win it and Youngs clears with a box to midfield.

The Boks’ won the toss and have elected to kick off at a Twickenham bathed in glorious sunshine. 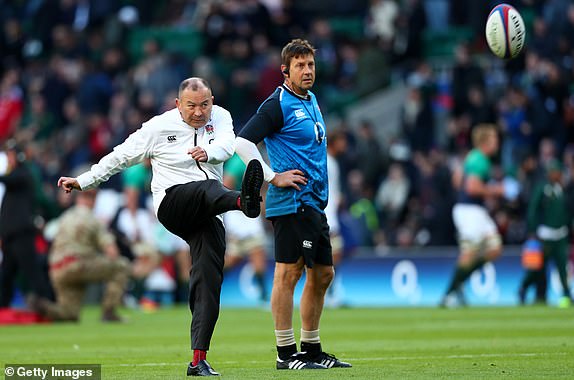 Time for the anthems, South Africa’s ‘Nkosi Sikelel’ is a belter. There’s a huge sense of anticipation about this one and it feels like a bit of a step into the unknown.

If you aren’t already buzzing for this one, this should do the trick.. Those Youngs dummies were magnificent last time the Springboks were in town.

Marx, Etzebeth, Vermuelen. Those three will give the Springboks plenty of go forward and if England can nullify that trio, they’ll be well on their way.

Keep an eye on Willemse at fullback, a young man with bags of pace and the ability to create something out of nothing.

No Mako, no Billy, no Anthony Watson and those are three names you’d pen in England’s strongest starting side. But despite injuries and suspensions, It’s still a line-up with plenty of talent.

The new look front row of Hepburn and Sinckler will be fascinating to see, as will Te’o’s fitness, given the Worcester man’s lack of sharpness. 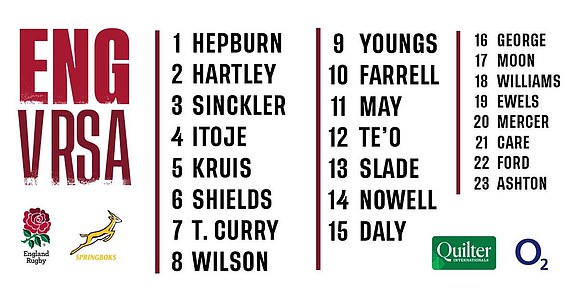 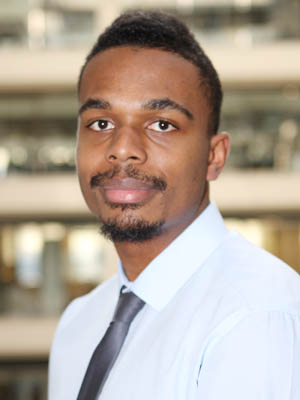 The atmosphere is building outside and around the grounds. There was a strong presence of green on the trains en route – do expect likewise in the stands at HQ. 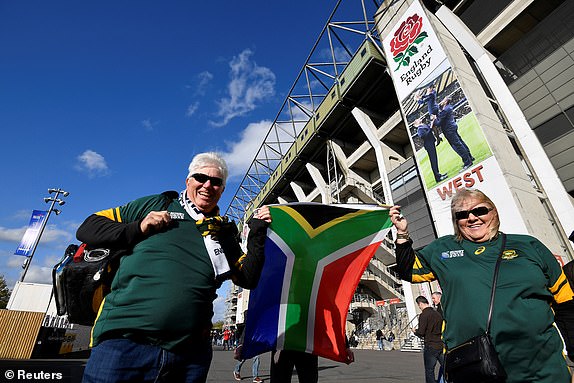 England’s autumn campaign begins in just 30 minutes. By 5:00pm this afternoon, we’ll have a far better idea of where Eddie Jones’ side stand a year out from the World Cup.

South Africa are the visitors and have brought a monstrous pack to Twickenham, looking to bully England and back up their series victory in the summer. The Boks’ are on an upward curve and it will be fascinating to see how England handle them on home turf. 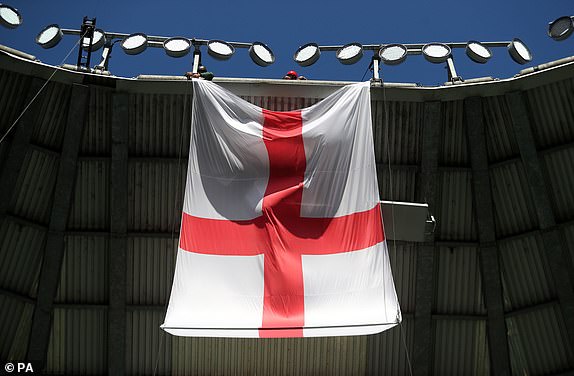 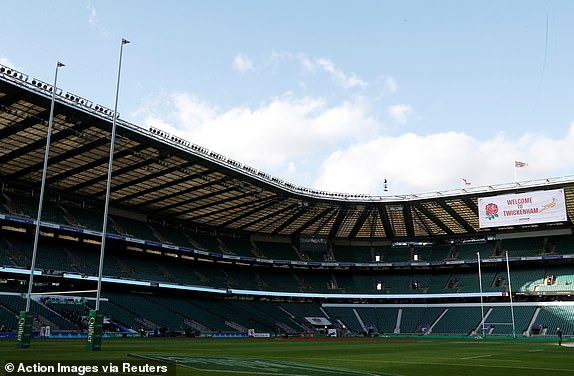 England welcome the Springboks to Twickenham on Saturday afternoon with a new-look starting XV.

South Africa have made the trip to these shores in arguably their finest form for some years, having beaten Australia and the All Blacks in back-to-back Tests in September.

Owing to injuries and suspensions, Eddie Jones has been forced to make a number of changes to what many would consider to be his favoured XV.

However, despite a poor run of form, Jones and Co will be boosted by the knowledge that they beat South Africa last time out at Newlands in the final Test of a three-match series this summer.