Why is the AFL changing the rules again?

New rules are designed to tire out players to “spread the field”. But what else is behind the latest changes?

In a sporting year marked by hubs, bubbles and masks, there was one issue that put the forever agile and flexible AFL in a particular bind.

It involved rules – and not the COVID kind.

Nine new laws of the game – introduced at the start of 2019 to improve the spectacle and increase the number of points scored in a game, among other things – had not achieved their aim.

On the one hand, they wanted the AFL to ease congestion so the rolling mauls of players around the ball disappeared – they wanted the game opened up, and more chances to score.

On the other hand, the strong message from fans was "don't change the rules".

The AFL knew that more goals helped broadcasters too, but that wasn't the its motivation, nor was pressure being applied from rights holders.

The league's objective was merely to make the game a better spectacle.

It knew the global trend in sport is about highlight creation – or what AFL head of football Steve Hocking calls "Dusty Moments".

No change was not an option.

On November 18, when Hocking told the AFL competition committee that the AFL Commission had approved a new suite of rule changes, committee members were shocked. They had been brought together from various clubs in 2018 for the very purpose of discussing in detail issues confronting the game before they went to the AFL Commission.

The feeling was that, even though the changes were ostensibly minor, momentum for change had won out over extensive research into the potential effects of the changes, a roundabout process the AFL puts down to being a COVID-dictated abnormality.

So what are these changes? What impact will they have? And will they make the game more "televisual"? 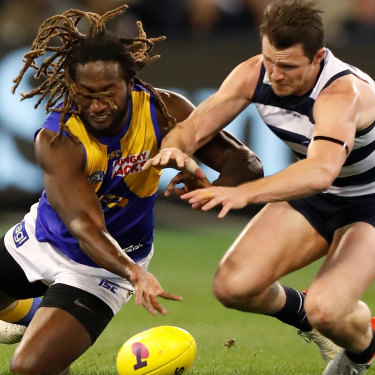 Nic Naitanui, left, shown here with Patrick Dangerfield, plays only 70 per cent of game time due to injury. Interchange reductions will force West Coast to rethink how they use their star ruckman.Credit:Getty Images

Why does one of the rules seek to tire out players?

Interchange rotations have been reduced from 90 to 75 per team per match – they were 133 per match (including changes made at breaks) at their high point when unregulated in 2013.

This shift will fatigue players so space opens up on the ground as they struggle to get into a defensive position or lay tackles.

The competition committee was dismayed that this decision was made before the length of quarters had been decided – shorter quarters would reduce the impact of fewer rotations because players can catch their breath at quarter times. However sources say it's much more likely the game will revert to 20-minute quarters in 2021 after being 16 minutes in this compromised season.

The value of endurance athletes such as Tom Phillips, Brad Hill, Isaac Smith and Mark Blicavs increases while the power athletes – some of the game's most exciting players – such as Patrick Dangerfield, Jake Stringer and Jordan De Goey could be less effective as their ability to play high-energy bursts then recover on the bench is compromised.

Clubs will also be motivated to play more than one ruckman as players such as Richmond's Toby Nankervis will struggle to play out the whole game with their interchange opportunities limited. The decision is a real blow to West Coast star Nic Naitanui, who plays, on average, less than 70 per cent of game time.

Why has movement been minimised on the mark?

The AFL thinks this will declutter forward lines and give the player with the ball greater options inside the corridor, which is a better place to attack. It also makes it harder for defenders to delay ball movement. Club sources say players and coaches will eventually find a way around the rule; the question as to how it will be adjudicated, given how inconsistently umpires enforce the protected area rule, also remains to be seen.

The third change is this: the mark at kick-ins will be pushed back from 10 to 15 metres and little impact is expected, although the AFL thinks this will give teams a chance to move the ball from defence more easily as it will force teams to push their defensive set-ups to a part of the ground that is harder to defend.

"We want more time and space back in the game," Hocking said.

A fourth change is to be trialled in the VFL/East Coast competition and has been described as "the nuclear option" for the AFL, which might introduce it in 2022.

At each boundary throw-in and kick-in, each team will need to have a minimum of three players inside the 50-metre arc with one pair required to be in the goal square. This creates space around the ball and one-on-one contests ahead of the ball, in what football people call "spreading the field" (as the space is more evenly distributed).

But it would also significantly alter the way the game is played: players would be forced to position themselves on the field in such a way that after a stoppage their team did not incur a penalty.

How long players have to retreat to starting positions inside 50 without being penalised has not been established with Hocking admitting the AFL needs to work out with officials how the rules should be adjudicated.

What is the purpose of these rule changes?

Hocking says "spreading the ground" will be mission accomplished – but it's not just that.

It's the increased scoring that leads to increased ratings and attendances which, in turn, increases the value of sporting rights for media companies with their finances underpinning the entire game.

The AFL wants to improve the spectacle as the game competes with the alternative entertainment options that streaming subscription services provide.

This is not easy as scoring has dropped, on average, by about four goals a game in the past decade and has reduced even further in the past three seasons, with 2020's shorter games making defence even more stifling.

In 2020, there were a record number of quarters where teams did not kick a goal. Collingwood's effort in kicking just one goal until three quarter-time in the primetime semi-final against Geelong underlined the problem.

The truth is even the AFL isn't certain the changes will make the game more "televisual" but they know too many games are too congested to be entertaining.

This steady decline in scoring is because team defence has become very good at stopping opposition scoring, with every player required to defend regardless of their role and where they are on the ground.

The rulemakers want to increase the time and space available to players with the ball, which makes it harder for defenders.

The rules capping interchange rotations are designed to tire players so they can't close space as easily. This allows teams with the ball to move it from one end of the ground to the other.

Hocking also wants to make it harder for teams to delay ball movement, push players back into defence and crowd opposition forward lines, hence rules regulating players on the mark.

And he wants the rules to influence the game without the fans noticing a dramatic change in the way the game is played as a result of the changes.

What other options were there to bump up goal-scoring?

An option to reduce interchanges further was rejected on the grounds of player welfare, according to the AFL, as they await commissioned research measuring the effect of a drop in the cap on players and injury rates.

Introducing zones (the AFL prefers to call them starting positions) which are being trialled in the VFL/East Coast competition will be unpopular and represent a radical shift for the game. The fact it is being trialled in a proper competition over an extended period of time, is an indication of how big a leap it would be for the AFL.

Bonus points for high scoring – the kind of things you see in sports such as Twenty20 cricket or rugby union tournaments – has been raised but is considered too gimmicky for football.

What are the dangers for the AFL in making these changes?

Spectator dissatisfaction is the ultimate risk – the perception that players and coaches are commodities used to create a product attractive to the fans.

The potential to increase injury is also a concern, particularly among players, but also with the AFL who have had a high-performance working party assessing programs with the aim of reducing the risk of injury. Recent research is yet to be released.

Trialling rules on second-tier competitions is also risky as this potentially brands those competitions as being more about development than premierships, diluting their worth. Former Port Melbourne coach David Dunbar has been outspoken in his criticism of the decision.

Repeated rule changes can also confuse people new to the game and make it extremely difficult to officiate. As the tinkering continues, the game has several different rules, depending on the level at which it is played: AFL, AFLW, VFL/East Coast, SANFL, the NAB League and local leagues all play slightly different games.