‘Wasn’t much in it’: Souths accept Roberts’ two-match ban for elbow

Fired-up South Sydney centre James Roberts will miss the next two games after the Rabbitohs decided not to roll the dice at the judiciary and contest his charge for what has been described as a "really grubby" elbow to the back of Corey Oates' head.

Souths teammates claimed on Saturday there was not much in the incident, which earned him 10 minutes in the sin bin and a grade-two dangerous contact charge from the match review committee. 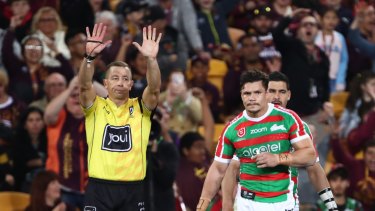 South Sydney’s James Roberts was sin-binned after a late elbow to the head of the Broncos’ Corey Oates.Credit:NRL Photos

"I'm not quite sure that's in the spirit of the game, but I'm sure Mr Richardson will sort that out this week with Wayne [Souths coach Wayne Bennett]."

Souths were never prepared to complain about Roberts and Su'A being charged. One of their key arguments a couple of weeks ago was some Storm players should have been charged.

Souths coach Wayne Bennett was in a jovial mood and even high-fived his players in the Suncorp Stadium dressing-room as he got one up on Broncos counterpart Anthony Seibold and kept his club's top-four hopes alive.

Without Roberts, Bennett will be hoping fullback Alex Johnston can return from injury and allow him to potentially move Adam Doueihi to the centres. Doueihi was in a moon boot at Sydney airport on Saturday, but is expected to make the trip across the Tasman.

Campbell Graham can also play in the centres, as can Kyle Turner and Ethan Lowe, while Sam Burgess (quadriceps) remains a chance to also return.

Souths veteran John Sutton, who was seen blowing up late about a possible knee to the head from Joe Ofahengaue, was delighted with the win but also acknowledged the hole Roberts would leave on the right edge against the Warriors and then bitter rivals the Sydney Roosters.

"He's a big loss," Sutton said. "There wasn't much in it. He had a point to prove against his old side. It's footy. There was also nothing in Jaydn's [high shot]."

Roberts came down with his elbow as Oates lay motionless after bombing a try in the 14th minute.

"The James Roberts one looked terrible because at the time Corey Oates was knocked out, so it actually looked really grubby," Fittler said.

Bellamy, whose side could host Souths in week one of the finals should they finish fourth – the same scenario as last season – said: "Souths played with a whole heap of grit. It's not my job to say they [Roberts and Su'A] should be charged or not charged or get this many weeks, that's up to someone else.

"But they are the sort of things we are trying to wipe out of our game as it's dangerous for the players copping that treatment."