Geelong coach Chris Scott has again attacked the AFL over the league's finals fixturing arrangement, declaring "the system is wrong".

The Cats booked a top-two spot with a 68-point win over Carlton at GMHBA Stadium on Saturday, however Geelong's home qualifying final will be played at the MCG despite the club's push to bring finals football to Geelong.

Asked about the issue, Scott broadened his complaint, pointing to the fact that the grand final is played at the MCG.

"I'm going to take it away from the Geelong thing, because anyone who's not a Geelong supporter just considers it whingeing," Scott said.

"The one thing I will say is that most normal people know the system is wrong. There can be no doubting that it's wrong. But it is what it is. West Coast and Brisbane, GWS for that matter, maybe the Crows and Port, have to come and win a grand final, probably at their opposition's home ground as well. The system's bizarre. So you need to be that little bit better. Which West Coast were last year.

"Are we confident we're that? We're hopeful. We've had a good preparation. We've given ourselves every chance. Now whether we can go and beat teams that play 15 games at the MCG every year, including probably 10 or 12 in a row, is yet to be seen. But we're up for the challenge."

The 'G will continue to host the grand final until 2057 under a deal signed last year.

The Cats will finish first if Richmond beat Brisbane on Sunday, and will fall to second if the Lions beat the Tigers.

Geelong are set to be spoilt for choice when it comes to selection come week one of the finals. While Mitch Duncan sent a scare through the Cats' faithful after hurting his shoulder early in the game, the star midfielder returned to play out the match.

Jake Kolodjashnij (hip) should be available for the qualifying final while Tom Atkins (hand) and Jordan Clark (elbow) could both play in the VFL next week as they stake their claims to play in week one of the AFL finals.

Scott said the Cats would take a horses-for-courses approach when it came to finals selection, tailoring their 22 for whichever teams they come up against in September. 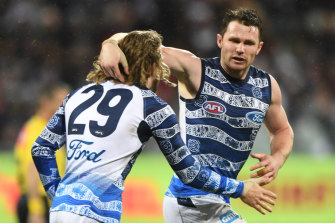 ‘Sky’s the limit’: Geelong’s Patrick Dangerfield (right) is confident heading into the finals.Credit:AAP

Scott was meanwhile full of praise for superstar Patrick Dangerfield, who had 34 disposals and kicked four goals. Scott suggested that in his opinion Dangerfield is the best player in the AFL.

Speaking after the game, Dangerfield said the "sky's the limit" for the Cats.

"I feel like we're in good form, which is a good sign this time of year. We'll use the week for what it is, and recharge a little bit, then get ready for finals," Dangerfield said.

"It's the only thing that matters."

"It was disappointing," he said.

"We just weren't there for four quarters against really good opposition."

Ed Curnow sat out the final quarter because of an Achilles issue, but Teague said the issue wasn't serious.