The rival NRL coach who loves to see the Tigers winning

“I always want to see the Tigers do well,” Payten said.

“I really enjoyed seeing their two wins. I thought it was not only great for the club but for their players to have that [winning] feeling again. I just don’t want to see them win on Sunday.”

Payten will sit in the Cowboys’ coaches box on Sunday as his team rounds out Magic Round against the Tigers, with whom he won the 2005 premiership as a player and was once an outsider for the head coaching role.

He remains in contact with former coach and now football director Tim Sheens and has always been a fan of maligned playmaker Luke Brooks, whom he coached in the under-20s.

Payten was quick to dismiss any talk of Brooks heading to North Queensland – which circulated when he first stepped into the top job at the start of last year – but was happy to heap praise on the rejuvenated playmaker as he tries to hand the Cowboys just their fourth loss in 10 rounds.

“Brooksy has copped it over the years – I’ve felt sorry for him – but I’ve always held him in high regard as a player,” Payten said. “He was never coming here, even though I could understand the talk because of our connection.

“Since Jackson Hastings has [moved to halfback], he’s been a good foil for Brooksy, and it actually reminds me a bit of our situation here with Tom Dearden. We have Chad Townsend, who has come in and organises our team, and that allows Tom to run and kick and get all the parts of his game right.”

Brooks said he could see a bit of Sheens in Payten’s coaching style.

“He was coached by Tim Sheens for most of his career – they both loved their attack – and what I remember from playing under him in the 20s was how smart he was with his set plays,” Brooks said. 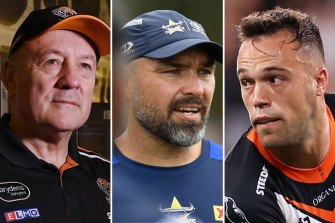 Payten has done a remarkable job to turn the Cowboys around, especially given plenty of bookies had them listed as one of the favourites for the wooden spoon.

And not once has he forgotten the “profound involvement” of Sheens on his playing and now coaching career.

“Sheensy had a knack of playing to an individual’s strengths,” Payten said. “He changed the way the game was played at the Raiders with the expansive football and long passes and speed … at the Tigers the forwards were never pigeonholed, and he allowed us to pass the ball.

“Sheensy came up with a style that enhanced all our attributes, and I’ve tried to do the same thing [at North Queensland].”

Payten still speaks with Sheens once a month via text or over the phone, and joked there was no such thing as a short conversation with the supercoach when it came to discussing rugby league.

After missing out on Penrith’s Viliame Kikau for the 2023 season, the Cowboys turned their sights to Tigers’ back-rower Luciano Leilua, and Payten could not be more impressed with his form. Leilua was someone who “will be a real asset to us on the back of a couple of pretty good young edge back-rowers we’ve got already,” he said.