Cameron Smith says he will make a decision on his retirement before Christmas as speculation grows about his future in the NRL.

Smith spoke on SEN Radio’s Breakfast with Vossy program on Wednesday morning following the release of his autobiography, which has left many questioning whether the book is the final chapter of his career.

The Storm skipper said he was yet to make a decision on whether he would play on, but would make the call before Christmas. 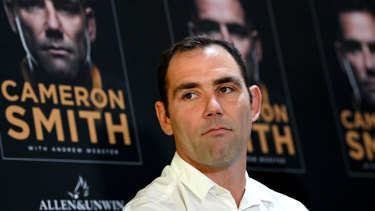 In the book, Smith declared that it was Bennett, not Storm coach Craig Bellamy, who was responsible for introducing the wrestle to rugby league, revealing the Souths coach brought a specialist grappling coach into Queensland camp in 2003.

"I know it was a late change, but I informed my management and [book publishers] Allen and Unwin and unfortunately it was just something that I couldn’t get out of and couldn’t change."

During the interview on SEN, Smith also declared wrestling was "good" for rugby league and admitted it was a key reason for the Storm's success.

In recent years, Bennett has been critical of wrestling in the game, with Smith pointing out the coach's apparent hypocrisy.

"Other coaches and clubs cannot sit there and single out the Melbourne Storm for trying to involve wrestling in the game – everyone does it now, everyone practices it," he said.

"It’s just that some clubs are better than others and we’ve been highly successful with our defensive techniques and it’s gone a long way to help us achieve what we’ve achieved over a long period of time.

"I’m not trying to point the finger at anyone, but all I’m trying to outline is that the Melbourne Storm and wrestling go hand in hand, according to a lot of fans and particularly the media, and that’s fine and we’re happy with that because we’re not denying it."