Collingwood midfielder Jordan De Goey had scans on Sunday morning after hurting his shoulder in the second quarter of Saturday’s qualifying final loss to Geelong.

De Goey went to the rooms during the quarter but re-emerged to be among the Magpies’ best players, kicking two goals in the final quarter to nearly lift Collingwood into a preliminary final. 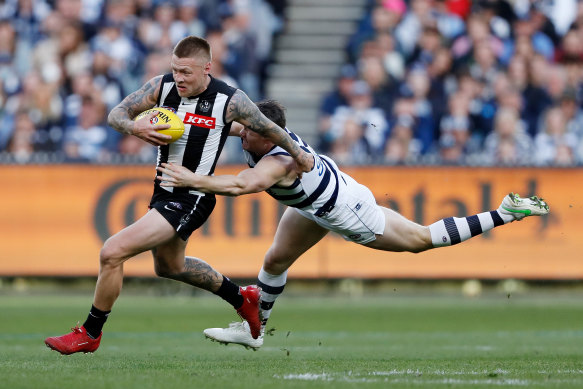 Jordan De Goey, who starred for the Magpies, is tackled by Patrick Dangerfield.Credit:AFL Photos

The club said the scans were a precautionary measure to assess the injury as they prepare for a cut-throat semi-final against Fremantle next Saturday night.

Collingwood are expecting to be without midfielder Taylor Adams after coach Craig McRae said the initial diagnosis was that he tore the groin tendon off the bone during the last quarter of the epic match.

The out-of-contract De Goey will be vital against Fremantle and is expected to play at this stage, but the club will know the extent of concerns on Monday.

De Goey finished the game with nine tackles, two goals and 25 disposals and looks invested in the Magpies as other clubs including St Kilda make a play for his services. The Magpies have begun discussions in the background to prepare a contract offer for the 26-year-old.