Scott Pendlebury goes to the top of Pies’ pile

When Scott Pendlebury was drafted to Collingwood with pick No.5 in the 2005 national draft, all he wanted was "a long career".

"I didn't really have games [tally] in mind, I just wanted to maximise my potential and when I retire eventually, make sure I didn't leave any stone unturned," Pendlebury said on Thursday. 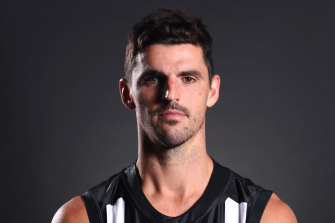 Pendlebury is unquestionably one of Collingwood’s greatest ever players. Credit:Getty Images

"It does go really quick," he said. "I don't feel 32. I don't feel like I have played as many games as I have, you just always try to stay in the moment [and] get incrementally better.

"I am still shocked that I sit here about to play game 314 for the club. It feels like I am 150 to 200 games in and still trying for look for ways to get better.

"It's been a hell of a journey, I have enjoyed every minute of it [and] I still think I have a bit left in the tank as well."

He remains one of nine players from that draft still playing, and is arguably the best of the bunch, although Josh Kennedy (pick four) has a say in that race (the others remaining are Marc Murphy, pick one, Paddy Ryder, seven, Shaun Higgins, 11, Nathan Jones, 12, Shannon Hurn, 13, Grant Birchall, 14 and Travis Varcoe, 15).

The 2010 premiership player and Norm Smith Medal winner said he would spend this week thanking those who have helped him to this milestone.

"It's not just how you perform on the field, it's how you act off the field and how you treat people along the way," he said of Maxwell's advice.

The six-time All Australian said Collingwood's stability had meant a lot to his success.

"The football club being so stable in my time [has helped]. I have only played for Mick [Malthouse] and Nathan [Buckley]. The board has been pretty stable, the football club has played finals 11 out of the 15 years I have been here.

"There hasn't been too many ups and downs or list changes or rebuilds."

Like many Collingwood champions there's been one affliction not even Pendlebury has managed to evade – grand final losses.

"[Playing] finals just early in my career – regardless of the 2010 win or the 2011 or 2018 losses – just playing finals, you understand the magnitude of those games," Pendlebury said.

"They're ones you want to be in because they're so exciting. The build, the nerves, everything.

"You'd rather be in the hunt than not there at all."