Retired South Sydney rugby league star Sam Burgess is set to be employed in a highly paid administration role by the NRL club. 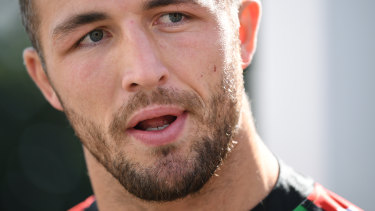 Sam Burgess had been contracted to play until 2023 until a shoulder injury cut his career short.Credit:AAP

News Corp reported that English forward Burgess – who had to give the game away because of a shoulder injury – will earn as much as $360,000 a season over 10 years in the job.

That would take him up to the amount he was set to receive as a contracted player over the next three years.

Souths are reportedly waiting on their request to medically retire Burgess from the game before approving a deal for the 30 year-old.

That could happen as soon as the end of the week.

The Redfern club had been working on an arrangement with the NRL to see how much of Burgess' $1 million-a-season contract would need to be included in their future salary cap.

“I have loved absolutely every minute; the highs, the lows; the grand final; coming home; my injuries; my dates with the judiciary. It really has been a fantastic ride," Burgess said  at the time.

“This decision was one of the hardest decisions I’ve had to make in my life, however the decision was out of my hands essentially. I am no longer able to be myself day in, day out on the training field and consequently the playing field.

“I will not be playing in the NRL next season. My time has come to an end. I’m excited for my next chapter in life.''