A commanding second half from captain Adam Reynolds and some freakish play from gifted winger Selwyn Cobbo lifted Brisbane to a come-from-behind win against the Bulldogs at Suncorp Stadium on Friday night.

The home side trailed 14-6 at the start of the second half and the visitors were on their way to an upset win despite the medical hurdles that had been placed in their way throughout the week.

It was Reynolds, the star off-season recruit, who showed his class and experience to muster the Broncos and guide them to a convincing 34-14 victory. He scored a try himself, set up another and was the on-field general coach Kevin Walters had so desperately wished for on his shopping list.

And Cobbo is on his way to becoming a headline act in the NRL. He has the kind of ingrained talent that no amount of coaching can create, scoring a late double, the second of which was a spectacular piece of work in the corner and he hauled in an impossible ball and planted it just before the dead-ball line.

The Bulldogs were forced into a host of swift changes as Brent Naden, Jake Averillo, Ava Seumanufagai and Reece Hoffman all dropped out of the initial team when COVID swept through the ranks.

That would lead to debuts for Jacob Kiraz and Billy Tsikrikas, a teacher at Endeavour Sports High School, who were both parachuted into the 17 despite being outside of the club’s top 30. Both were obscure enough to warrant a black silhouette instead of a photo on the NRL website.

There were feel-good stories for the Broncos as well, with Te Maire Martin playing his first game for two years after being forced into early retirement after suffering bleed on his brain. He lost few admirers upon his return, rattling off a series of try-saving tackles and returning the ball strongly. 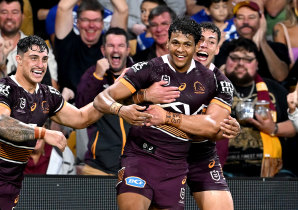 Selwyn Cobbo (middle) helped turn the match the Broncos’ way in the second half on Friday night.Credit:Getty

Even before the match had even begun, there was high drama after a heckler began shouting during The Last Post and minute of silence to commemorate Anzac Day. He was accosted by a furious fellow patron, then clipped twice in the jaw as he tumbled over rows of chairs.

Nearby fans did little to intervene as the man, wearing a Brisbane jersey, was given more rough treatment from the irate Bulldogs supporter, instead telling him to leave the stadium after the show of abject disrespect during the ceremony.

On the field, the Broncos weren’t faring much better than their embattled supporter. Payne Haas went off after seven minutes with a shoulder injury as the Bulldogs set up an early lead when centre Aaron Schoupp put it on a platter for Josh Addo-Carr in the 17th minute.

The NSW Origin winger made it a double just over 10 minutes later, by which time Haas had returned but Brisbane were trailing 10-0 and looking messy before Corey Oates swept across the field like the Queen Mary and steamed through gap on a set play to get the home side on the board.

It was the Bulldogs who struck first in the second half as Matt Dufty left Herbie Farnworth grasping at thin air, before Corey Paix went over from close range to bring them within two at 14-12.

That was the kind of soft try the Bulldogs must cut out if they are to take some serious steps this season. And it only gave the Broncos fresh impetus as Reynolds began to take control, then scored a wonderful try after he loomed up in support of his own grubber kick and scored under the posts.

Cobbo then came into his own. The second of his two late tries was breathtaking, with Cobbo showing electric speed to beat Addo-Carr to the Reynolds kick, then even better hands to reel it in and score.